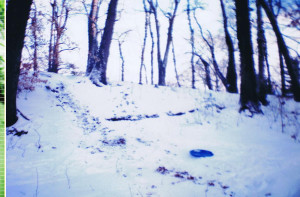 “Isaac’s being a jerk,” my seven year-old, Isaiah, says about his older brother. They have been sledding over new-fallen snow.

“Because he keeps knocking me off my sled.”

“Why do you think he does that?” I ask. I’ve been trying to help my children consider how sometimes they incite one another.

“My sisters pregnant I can’t wait to find out if im gonna be an aunt or uncle,” is what the girl tweeted. By the time I saw a screenshot of her words, they had traveled pretty widely. What an idiot, people said. Glad I’m not that stupid. I thought the same things.

Some weren’t content just to mock her to one another; they went to her Twitter timeline and told her she was stupid. Because the mark of intelligence is marking the stupidity of others, I guess.

I went to Twitter too, because I had begun to wonder: Is anyone that dumb? I scrolled through her tweets, and watched time reverse itself: from the latest, where she asked why this harassment was happening to her and told these strangers to leave her alone; to hours earlier, before she was beaten down, when she gave back as good as she got; to days before that, before someone decided she made a nice target.

She’s a girl who doesn’t always attend to her grammar and likes the things that girls like and has an okay sense of humor. She’s just a girl. She isn’t an idiot. The tweet about being an aunt or uncle had been a joke.

And as it turns out, lots of people have said the same joke. Not everyone has had strangers pop out of the woodwork to belittle them for doing so, but some have. I suppose they got off easy—even this girl who was so widely mocked that she shut down her Twitter account­—in comparison to Justine Sacco, who tweeted a joke about AIDS before boarding a flight to Africa in 2013, only to land and discover that her tweet had traveled the globe and that she had been portrayed as a monster.

I saw there’s a movie coming out, a retelling of the mangled-beyond-recognition Dracula story, in which he is a hero who takes on vampiric powers to save his family. This is a trend in movies, to rehabilitate monsters. It’s a curious thing that we are humanizing monsters, yet are so quick to bestialize humans.

It was funny when my son said it, but a little chilling. You know how I worry. What if Isaiah is going to become one of those dreadful puritanical hate-preachers on low-budget cable TV? We should never have given him an Old Testament name. What if he sees with a child’s prescience that his brother really is evil? I’m failing as a parent.

So in the spirit of practicing what I preach about considering how our actions incite others, I think on the conversations my children have overheard, in which I question someone’s motives, in which I denounce some political figure or corporate charlatan, in which I rail against the people tearing down Western civilization.

Yes, that happens a lot at our dinner table. I like to imagine one of them will write a colorful biography about their father one day.

There’s my muttering about this church or that company, about a neighbor who lets her kids run up and down the street all night. And let’s not even consider the things I say while driving.

I don’t know why we want to think the worst of people, except maybe because it allows us, in a false and perverse way, to think better of ourselves. “Thank God I’m not like that tax collector,” said the Pharisee on his holy road to hell. Isn’t that what each of us says, in our own hearts, every day? No matter what we’ve done, we can always find someone worse. Thank God.

We think the worst of people, and we say it, and it’s a cleverly disguised way of saying we are good people, or maybe just that if God is in the business of paying people back, there’s a long list of folks he should scorch before he turns his awful eyes to us. It’s a small and mean kind of prison-camp thinking when you ponder it, but here we are.

Tony Woodlief lives in North Carolina. His essays have appeared in The Wall Street Journal and The London Times, and his short stories appeared in Image, Ruminate, Saint Katherine Review, and Dappled Things. His website is tonywoodlief.com.