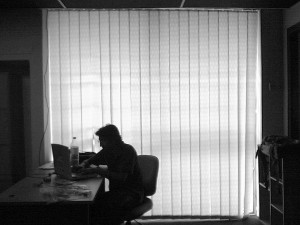 Yesterday I was running around the park in a T-shirt with a birthday party full of seven-year-olds. Today, I walked downtown through a flurry of hard, tiny pellets of snow that I couldn’t escape from. It was a little like the experience of going to bed a happy, underpaid writer and waking up the next day as a miserable, underpaid writer who is staying home while everyone else you know is traveling to a conference.

No matter where you look online, you’re getting smacked in the face with these niggling little reminders that you’re here dealing with laundry and kids and deadlines and your friends are off brown-nosing editors and eating dinner in absurdly large groups and developing inside jokes and memories that you’re going to be outside of the next time you get together.

You can complain to and commiserate with the three or four other people you know who aren’t at the conference, but you’re aware that it’s petty and fruitless, so you stop after a few hours and just try to avoid the Interwebs for a few days—which means that, no, you didn’t see that video of Trump as Lex Luthor or whatever it was.

While you are suffering conference envy, you probably feel like you’re an unpleasant person to be around. And you are right; your envy is draining and tedious. You’ve become an emotional vampire.

But you kind of know this because even you don’t want to be around you—you want to be around your friends, trawling around a huge exhibition hall collecting bookmarks and postcards, stalking that poet you read one poem by on PoetryFoundation.org and totally dug and became sure you and she would really get along.

The good news is: there’s hope.

Begin by remembering that all conferences end after a couple days. That guy who’s going to a second conference in the mountains right after the first one is a jerk, anyway, with bad taste. Everyone else will have to come back home and, after another day or two of adrenaline-filled posts about great friends and memories, will return to their inane posts about what they’re making for dinner, or that article about Clinton they shared without explaining why.

You can hang in there for four days, a week at most. If you get desperate, remember Kimmie Schmidt’s advice about breaking tasks down into smaller increments: You can do anything for ten seconds.

Next, tell yourself that you are not defined by your inability to attend that conference. You’ll go to the next one, after all. And because you’ll be there it will rock so much harder than the lame one you couldn’t attend, that people will mostly stop talking about it.

Most of what you saw online was the consequence of the cognitive dissonance of your friends having spent so much time, energy, and money getting to the conference that they must be having a great time there, right? Like those parties that are mostly people drinking bad beer and woot-ing all the time to fill the desperate silences between chatter about how much fun they’re having and nursing their drinks like, like, existential infants.

You don’t need to fly to wherever to have a good time.

Anyway, real life, you know, happens when you’re yelling at your kids or trying to finish the shopping before school lets out. That’s what people write poems about—not conferences. Good art comes from your misery, as Tolstoy seemed to mean when he said happy families are all alike and thus uninteresting. So, too, for happy conference-goers. Screw them.

On a similar note, consider probing your envy and bitterness for creative material. Journal about it, write poems about it, blog about it (preferably somewhere those conferencers won’t see it). Get it off your chest, and you’ll feel better before long.

Finally, don’t underestimate the power of a good sense of humor. Even if you have to fake it at first, make jokes about how not envious you are. Mock how mundane and tedious your life is compared to #conferencelife. Pretend you have a psychological condition that explains your erratic behavior.

And be prepared, the next time you do conference with those friends, with a list of four to six outrageous things you can do if they start talking about the one you missed. Shotgun a beer, or start singing “Onward Christian Soldiers,” or kiss the person sitting next to you. Anything is better than hearing about how great that last bloody conference was. This is the one you’re at, dang it, and it is going to be the best freakin’ conference even if the Facebook photos cost you your job when you get back home.

You can get another job. There’s only one conference.

Image above is by in transition, licensed by Creative Commons.