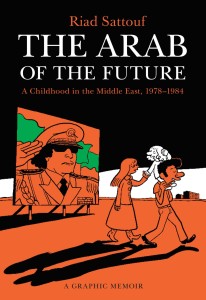 I snuck into a chair while a friend was describing how growing up under a repressive regime infects and perverts children. He wasn’t talking about his own life; he was commenting on the selection for our graphic novel reading group—a program of our wonderful Evanston Public Library.

I was late, and I hate showing up late, so I sat down and listened to try to catch up. I didn’t want to be that guy who makes everyone repeat the stuff he would have heard had he been there on time.

But, of course, they were just moving on from the main question I had hoped to discuss, and I wasn’t comfortable trying to guide us back myself. I didn’t know how, as a white Western male, to ask if a book by a half-Arab author could be racist against Arabs.

The book was The Arab of the Future, originally published in French and recently available in English. In it, Riad Sattouf tells the story of his life from ages two to eight, during which time his father, a Syrian who met Riad’s French mother while studying at the Sorbonne, moved the family first to Libya, then to Syria.

The title refers to the pan-Arab optimism that the Arab world, under the leadership of strong, charismatic personalities, would pull itself up from the degradations of colonialism and enter modernity. Riad, under his father’s guidance, was to be a child of this new Arab order.

Of course, we are living, now, in the ruins of those failed dreams and misplaced hopes. We’re also in a racially sensitive age in which I’m unsure how to even raise the question of racism in the right way; there seem so many land mines.

It comes up, though, because Sattouf, as a child, clearly hated Libya and Syria. He represents them as full of chauvinism, blind nationalism, anti-Semitism, decay, filth, and even monstrosity. He draws children, in particular, with grotesque features, and they disturbingly manifest the violence and bigotry around them. It’s not a place any Westerner would want to live.

In a New Yorker feature, Sattouf tries to claim the book is apolitical, that he only wanted to represent his memories—the memories of a two- to eight-year-old. He moved with his family from Paris, he had light skin and platinum blonde hair…maybe his memories were racist?

When a book makes you that uncomfortable, you look for someone to blame, a way to turn the magnifying glass outward. I wanted to reject Sattouf’s apolitical posture, to insist every gesture is political—and I’m usually protective of private selfhood.

Really, though, how can you invoke a political label in a story about a changing political landscape and then disclaim politics? Am I wrong here?

I wanted, I now realize, to consolidate my own sense of racial sensitivity by calling foul on someone else.

The graphic novelist and artist Özge Samanci happened to show up that evening, too. Her book Dare to Disappoint tells about her childhood in Turkey, so she’s pretty interested in narratives like Arab of the Future.

Even she felt uncomfortable with Sattouf’s book.

“I don’t know about his representation of the Arab world,” she said, and I was struck at the conflict in her voice. “I don’t know how a Western reader would understand it.”

Her artist self was in conflict with her Turkish self; the one wanted to permit Sattouf the artistic freedom she herself desired, while the other had a story, it seemed, of cultural misunderstanding—or perhaps worse.

And that’s when I started to get some clarity. It’s one thing for a handful of well-meaning white folks to want a half-Arab author to help us understand Syria; it certainly feels like quite another for a Turkish artist sitting next to me to feel the weight of that desire.

I wanted to say, writer-to-writer, person-to-person, “No, you write the story you need to write. You can’t try to please every audience. That’s not your job.”

It’s so easy as readers to put everything on authors. We expect so much from them; we hardly realize how much we invest in them, how much we rely on them to give shape to the flow of our experience. An author’s responsibility to her audience, though, is similar to what any person has to another person.

What about our responsibility as readers?

To suspend our own agendas long enough to learn of the author’s, for instance. To judge the book by the standards and contexts it invokes rather than our preferred ones. To extend hospitality, generosity, and compassion as we would were the author there before us.

I spent much of my dissertation thinking about this kind of stuff, but it’s still hard for me to remember and practice. That’s not to say it takes a PhD to figure out.

Another member of the book group (who for all I know also has a PhD) insisted we shouldn’t expect Sattouf to represent all of Syria, well beyond his childhood memories, for our sakes.

We, as readers, she said, should understand the perspective and scope and commit ourselves to not generalizing about the whole Arab world—just as we did for Spiegelman when we read Maus.

Such responsibility doesn’t resolve the problems; but it begins to share them. The images remain disturbing, grotesque. Nor has it been enough to learn that Arab readers generally feel the book is accurate; I still lack adequate context to balance out the negative images.

I’m writing from the middle of the morass, having come late to a conversation I don’t feel prepared for, yet I have a conviction that we can only address these things from a position of mutual goodwill. I’m trying to listen, to learn, and to bear witness as best I can.