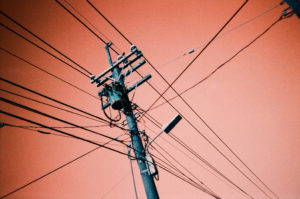 “Men and women in automobiles stood up to watch him die.” That’s the sentence one student recalled when I asked the class what was memorable in Eula Biss’s essay “Time and Distance Overcome.” The man who died was a black man “accused of attacking a white woman.” For his alleged behavior, he was “tied to a telephone pole and burned.”

After we discussed the short essay for about forty-five minutes—its structure, its late revelation of her personal connection to the subject—her grandfather was a lineman who broke his back when a telephone pole on which he had been working fell—I directed the students to the last section of Biss’s powerful Notes from No Man’s Land: American Essays, which offers additional information and reflections on the writing of each of the essays.

“I began my research for this essay,” writes Biss, “by searching for every instance of the phrase ‘telephone pole’ in the New York Times from 1880 to 1920, which resulted in 370 articles.”

This alone, I thought, is useful information for a first year college student: how one conducts research for this kind of essay.

About a week earlier, Erica Abrams Locklear, a colleague and friend, shared with us a remarkable treasure that her mother had recovered from Erica’s maternal grandmother’s house: her grandmother’s homemade cookbook, started in 1936 and ended sometime in the mid-1950s.

For our English Department retreat before the first day of classes, I had asked my colleagues to think about where they were at that moment, the eve of a new academic year, in their professional and personal journeys, and to choose an artifact to share with the rest of us.

Erica, an extraordinary young scholar, is currently working on a project on food, Southern Appalachia, and literature, so even before she said a word about the fragile book she held carefully in her hands, we knew there was something special and important about it.

Naturally, there were handwritten recipes for all kinds of dishes. Also, tucked inside the cookbook was a little booklet promoting Dental Snuff, “complete,” Erica explained, “with all the reasons tobacco is good for you.” Then there was a section of household hints. Carefully clipped from newspapers, these nuggets of advice were organized and pasted into the cookbook, an indication that her grandmother was familiar with and emulating, in her homemade book, published cookbooks.

As amazing as the treasure itself was, the wisdom Erica gleaned from its surprising discovery was, to me, even more amazing.

“It’s a reminder, for me anyway, to slow down and think about things as they occur, as you stumble across them. In research and teaching, it’s a reminder to let my findings dictate my practice, not the other way around.”

Slow down and pay attention to things as you stumble across them. Let your findings lead you. Great advice, I think, whether you are an already accomplished scholar and professor or a first-year student on the second day of the next stage of her academic and personal journey.

Two students raised their hands when I asked the class what, if anything, they noticed as we read aloud Biss’s commentary on how she came to write “Time and Distance Overcome.” There were only a few minutes left before the end of class. I called on the student who hadn’t spoken yet that day.

She could have ignored the information about lynching, the student said. Biss could have stuck with her original plan to write about the public’s aesthetic and political resistance to telephone poles—not wanting to mar the landscape, not wanting to allow a public, “share utility” to intrude upon one’s “private property”—and, how many years later, the acceptance not only of telephone poles and wires, but the perception “that the arc and swoop of telephone wires along the roadways was beautiful.” But she chose not to do that. She did what has hard.

I could hardly contain myself, I was so surprised, delighted, thrilled by what this student noticed!

Slow down and think about things as you stumble across them. Even when what you stumble across may utterly change the way you see whatever it is your gaze has been fixed on: a telephone pole, a region of the country and its food ways and literacy rates, or anything else you are inquiring into deeply for intellectual, cultural, political, artistic, personal reasons.

Notice the urge to turn away from that which challenges you or seems to threaten to get you off track. Practice restraint when you feel that urge.

I might be able to offer my first-year writing students a little help with their writing. But what I really hope I can offer them is the recognition of the urge to turn away from what may completely change or complicate their understanding of the way things are, and a few tools to help them resist that urge and instead to look more deeply into the expanded view of the world—both without and within—across which they may stumble this semester.