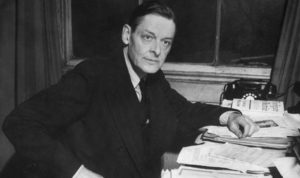 The poet and writer Dana Gioia penned an essay for the December 2013 issue of First Things titled “The Catholic Writer Today: Catholic Writers Must Renovate and Reoccupy Their Own Tradition.” The essay does not inspire much confidence in the state of “Catholic” writing at the beginning of the twenty-first century.

Our own Gregory Wolfe wrote a response published in Image issue 79, called “The Catholic Writer, Then and Now.” Mr. Wolfe’s essay consists in a broadening of the discussion to all Christian writers (Jews too). It also contains a strong pushback against Gioia’s mostly negative assessment.

In pushing back, Wolfe argues, against Gioia, that the problem is not so much that we lack good writers of faith, but that there is a general cultural unwillingness to recognize these writers of faith for what they are. Writers of faith, in short, are producing as many brilliant works of art as they ever were. It’s the public discussion that has gone silent.

In essence, Wolfe flips Gioia’s argument on its head. For Gioia, the primary factor in the decline of Catholic writers (and Christian writers more broadly) comes from the fact that the writers themselves “ceded the arts to secular society.”

For Wolfe, “the blame for the absence of Catholicism—or Judaism or Protestantism—from the larger conversation must, in part, rest with people of faith—and in particular with the critics, intellectuals, and theologians who help to mediate what is going on in the arts to a broader audience.”

Allowing himself a moment of nostalgia for the mid-twentieth century, Wolfe notes that if we are lacking one thing today, it is “the presence of thinkers like Jacques Maritain, Etienne Gilson, Allen Tate, T.S. Eliot, Reinhold Niebuhr, and Paul Tillich, who were equally at home in the New York Times and Commonweal.”

This is a powerful list of serious thinkers. I happen to revere each and every thinker on Wolfe’s list, to varying degrees. I’m also persuaded by Wolfe’s argument that the problem is not in the declining quality of writers of faith, but in the decline of the discussion around those writers.

But what about those thinkers on Wolfe’s list? Are they the last of the good guys? Or do they bear some responsibility for the withdrawal of the thinker-of-faith from the public realm.

Let’s take the New Critics first. T.S. Eliot and Allen Tate are the representatives of New Criticism on Wolfe’s list. We are all, of course, very thankful to New Criticism for reminding us that we must read texts closely, and that it is foolish to “reduce” a piece of writing to the psychology of the author or to the socio-economic conditions under which the text was written.

But the New Critics were also wagon circlers. It has become ever more clear, in retrospect, that their critical resistance to social and historical readings of literature was motivated by deeper fears.

The New Critics (by and large) were running scared from the collapse of Christendom. They worried that the breakdown of the Christian civilization that was responsible for the great art of the past would lead to a new barbarism. In some sense they were right, of course.

But Christendom was going to collapse whether Eliot and Tate stood bravely at the gates or not. It was intellectually dishonest to pretend that the civilizational structures of Christendom could (or should) have been defended. One only has to read Charles Taylor’s A Secular Age to see what an intellectually rigorous analysis of the collapse of Christendom looks like. It is the opposite of wagon circling.

On the one hand, it forced the language of the New Critics further and further into an empty formalism. Not wanting to be tainted by the contemporary world for which they felt such disgust and fear, Eliot and Tate opted for a technical critical analysis that fused a pseudo-scientific vocabulary with an academic haughtiness of tone. Not a lovely combination.

The second regrettable consequence of New Criticism was to insulate the works of art they thought they were protecting. The New Critics built a wall around the work of art. That wall was meant to insure the sanctity of the work of art, to prevent aesthetic objects from the reductions of the sociologist, the psychoanalyst, the economist.

But within the walls of New Criticism, there wasn’t much air, or light, or room to move around. This sad fact was patently clear to a thinker like William F. Lynch, whose brilliant Christ and Apollo was published in 1960. Lynch’s book opens thusly:

In writing this book I have been guided by the general assumption that any effort to keep literature in its rightful relation with the human and the real is a service, no matter how meager, to the truth and to civilization. Every effort to combat the view which makes literature an esoteric and isolated phenomenon in human history is a service to literature itself.

Lynch’s position couldn’t have been stated in more direct contrast to the views put forward by Eliot in his canonical essay “Tradition and the Individual Talent,” or by Tate in “Miss Emily and the Biographers,” or by John Crowe Ransom in “Wanted: An Ontological Critic.”

Alas, by the time the New Critics were swept out of intellectual fashion the damage had been done. The defenders of Christendom and of the sanctity of the aesthetic object retreated further into their critical holes and academic hiding places. In their fear and anger they abandoned the public sphere, which set the stage for where we are today.

Unfortunately, I’m not sure that Catholic thinkers like Gilson and Maritain, or Protestants like Niebuhr and Tillich fared much better, at least on the aesthetic front. We’ll look into that more deeply soon.