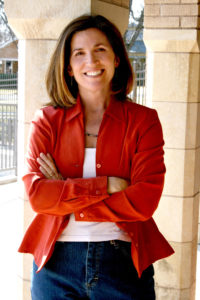 Clare Vanderpool, Newbery-Medal winning author of the novels Moon over Manifest (Delacorte, 2010) and Navigating Early (Delacorte, 2013), got her start by attending a writing workshop at The Milton Center, with which Image was associated in its early years and whose programs are now run by Image. While under a Milton fellowship in the mid-90s, I read one of her earliest works and now discuss her accomplishments in a two-part interview.

A.G. Harmon: In your first novel, Moon Over Manifest, you have your main character quote Melville—“true places are never found on any map,” i.e., are more than their locales or their coordinates on a grid. Did that quote influence the novel?

Clare Vanderpool: It definitely was the catalyst of the novel. The notion of a true place and what it is resonated with me. For me, that conjures up a lot memories. I’ve lived in the same place my whole life (Wichita), and memories are around every corner. But for young Abilene (sent by her itinerant father to a town where he’d once lived) who has never had a home, it became a real question. So the idea of finding what a true place is for the character became what the book was about. 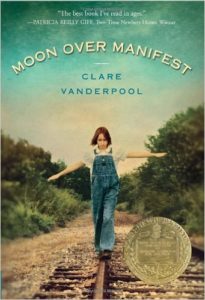 AGH: Later, Abilene has a gloss on that—that “true places are found in many places, including on a map.” Are we to take it that a place is indeed its story (pace Melville), but that it can become more than that too—that it is more incarnational—both a place and more than a place?

CV: For Abilene, her father has been her only place. Then she must live without him, which makes her question the world around her and in her place in it. She decides his use of the quote is a justification for his wandering. He has lost his place, and her discovery of why that is helps her come to a definition of her own. Ultimately, for her, a place comes to mean people, and traditions, and belonging—all things that require some geographic grounding.

AGH: Abilene is tempted at one point to leave her problems. It would’ve been an understandable but nevertheless tragic thing to do. She has to be brave enough to remain. In this way, is Abilene braver than her father? Is this her triumph, finding a way to endure?

CV: She is brave and does much on her own, but she really begins to discover what is so important about community—roots, interdependence on others, and a shared story.  It’s her integration into this community that helps her stay.

AGH: That’s a large concept. How much do you hope to provoke children to aspire to or think beyond their age range?

CV: Often children are underestimated as to what they can understand and piece together. With Navigating Early, I did a Skype interview with children in a New York bookstore. I was amazed at their insights; one girl who said she “didn’t want to contradict me” went on to have a beautiful spin on things.  I read books at an early age that I can enjoy now on a different level. I know there are some things in my books that a child might not fully understand, but that’s all right. I like layers that young readers can plumb as far as they can go.

AGH: There are worse things than that a child might go look up Melville.

CV: Yes. And I have to add that the foundation for all of this was set during my experience at The Milton Center, where I workshopped Moon Over Manifest. I was new, and the other writers were all very experienced. But when it was my turn to read and be critiqued, they responded to my work just as they had to each other’s. They talked about my characters, their development, and the story’s progression—it was so validating. Nobody said, “this is kid’s stuff so she can get away with X…” The standard was set high and that has become a part of my writing fabric. I don’t write down to my audience, regardless of what shelves my books wind up on.

AGH: In Moon Over Manifest, the plot intertwines two times. Both are set in the past—one in the far past and one in the more recent (though by “recent” it is still eighty years ago). Similarly, in Navigating Early, you intertwine the WWII era narrative with a tale told by a child savant, your title character. Is telling a story within a story a conscious choice?

CV: I have come to the realization that that is a natural tendency of mine. After I finished one of my first longer projects, I wrote a note to myself for the next one.  “Keep it Simple.” I wanted a straight linear story. It just didn’t happen. I do tend to complicate things. 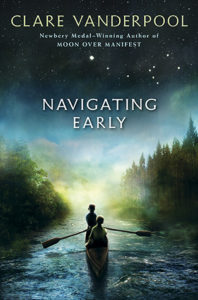 AGH: But it’s a legitimate narrative tool. People have always told stories within stories to add texture and meaning. In your second novel Navigating Early, the main character tries to make sense of his world with a tale he tells about the number pi, which he creates a story around that parallels his own life. Early comforts himself with a tale that makes order and sense out of a life that is chaotic and forbidding.

CV: With Navigating Early, I knew the book was going to involve a boy with savant abilities. A book I read, Born on a Blue Day, by Daniel Tammet, is an autobiography of a savant. There, he described the way he reads numbers. He memorized something like 20,000 digits of the number pi, and he drew pictures of how he sees that number as landscape, colors, and texture. So it wasn’t out of the realm of possibility for my character Early to read the number pi as a story that is real to him. The imaginative part for him is drawing parallels with his own story as he is on the quest to find his lost brother.

The above image is by Carol VanHook, used with permission under a Creative Commons license.