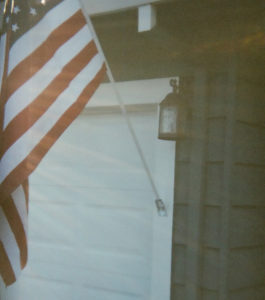 As a little girl, I remember watching the grownups in my hometown Episcopal church cross themselves, and feeling like there was a secret I was not yet privy to but wanted to know. Sometime in high school, I started crossing myself at will, at the “Father, Son, and Holy Spirit” mentions, but also before and after communion, and whenever I thought it might fit.

The first time I felt silly. After that—though I didn’t understand why—I liked this small movement, this physical manifestation of something that must be outside, but seemed also inside, something I wanted to be a part of.

When I was in the Army, my friend Darren died. We were both helicopter pilots, had met in flight school where I remember him not only tall, blond, and always smiling, but playing the guitar. We crossed paths as our units transferred responsibility supporting the Dayton Peace Accords in Bosnia; but he didn’t die in a helicopter. He died on his way to school, riding his motorcycle along a four-lane street in early morning, thirty-five miles an hour, when a truck turned in front of him.

Darren laid his bike on the road to slide under the truck; he was wearing full leather and a helmet. By the time the driver realized what was happening, he stopped the truck on top of Darren’s chest. Darren was Medevaced to the hospital and then transferred to Tucson, still breathing, but when they cracked his ribs to assess and repair whatever damage lay beneath, the tiny bit of pressure holding together a torn aorta released, and he died on the table.

Darren was married to a teacher and they looked a bit like Greek gods, with an impossibly compelling lack of awareness of their beauty. They were kind and funny and as real as anyone I’d ever known.

A friend and I sang at Darren’s memorial service in the post’s simple chapel made of clapboard with clear windows shaped for stained glass. We sang Jesu, Joy of Man’s Desiring, which we learned in Bosnia in a little church choir that met in a tent in the middle of Tuzla West. It was a simple memorial service. And then, though we were in a military academic setting and not in combat, because we were part of this larger brother- and sisterhood, came the roll call.

According to US Army Field Manual FM 7-21.13, the Final Roll Call “has its origin in the accountability roll call conducted by the unit First Sergeant following combat.” This is how I remember it.

The chaplain gave a benediction at the front of the chapel. Next to him stood the battlefield cross, a rifle facing down into boots topped with a helmet and Darren’s dog tags next to a large framed picture of him smiling. The congregation was mostly uniformed, but people in civilian clothes, Darren’s wife and parents and other family, were there, too.

Following the chaplain’s prayer, the silence started to open up the space where our sadness would gush out; the First Sergeant stood up in that silence and in a voice suddenly striking called out a name, loud, clear:

A uniformed soldier snapped to attention among the congregants.

“Here First Sergeant!” The response cut through the air, shattering the settling stillness.

Another rigid figure stood at attention on the other side of the chapel, and the calls and responses volley back and forth like gunshots across a canyon, seeming to build in momentum as the echoes built on new reports.

Instead of an answer, silence.

Silence threatened to slay each person in that chapel. The First Sergeant executed a movement as sharp as his verbal commands, swiveling 180 degrees to face the commander.

“Captain Van Zee, missing from roll call.” He reported with a salute, a quick snap of his arm.

“Strike him from the rolls,” The commander responded.

Traditionally a trumpet plays a few long notes signaling the end of a day, or the end of a life at this point in a memorial service, and I suspect it did then, though I can’t recall, because in those last few words everything collapsed inside of me and I wept.

In these memorials, part of us weeps for the person remembered. Part weeps for all those who have died. And these many years later, I am grateful for the service. I am grateful for the roll call. Rituals tell us who we are, and what we are part of when everything dissolves around us. They tell us we matter. Rituals connect the sacred to the profane, remind us of the divinity in the quotidian, and provide us structure when we are unmoored.

No longer in the military, ritual for me now is the priest holding up the chalice and the host on a Sunday. It is my family holding hands to bow our heads before dinner. It is the kiss on my child’s head before he turns to walk into preschool.

Ritual matters most within community: within the brother and sisterhood of arms, within the relations of a family. It can separate or bring together, with a power bigger than human intellect and understanding.

Eckhart Tolle says that ritual is a way to enter stillness. Abraham Verghese notes simply that rituals are about transformation. Ritual is a cornerstone of anthropological thought, says Kevin Carrico in Cultural Anthropology.

Whether ritual is about stillness or transformation or both, it is at least a way to stretch into that liminal space between the body and the spirit. Those times when the flesh is lacking, ritual points inward and upward, offering a whisper of the divine.

This post originally appeared on Good Letters on November 18, 2013.

Shannon Huffman Polson is the author of  North of Hope: A Daughter’s Arctic Journey as well as essays in Cirque Journal, High Country News, Alaska and Seattle magazines, Huffington Post, River Teeth and Ruminate Magazine, where her work was given honorable mention in the 2015 VanderMey Prize for Nonfiction. Her current project about mythology, community, and pathfinding is based on her experience as one of the Army’s first women attack helicopter pilots. Polson is a graduate of SPU’s Master of Fine Arts program. She can be found writing or with her family in the mountains of Washington state or Alaska and always at her website, Facebook, and Twitter.

The above image is by Aaron Anderer and is used with permission under a Creative Commons license.