Waking from the Nightmare 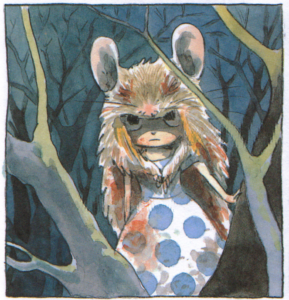 A little girl awakens in an autumn wood. She stands, looks up through the red-orange fire of the leaves to see a small patch of white sky. Then she brushes the leaves from her cardigan and walks out of the frame.

The idyll is broken. We’re back in the nightmare forest in the middle of Vehlmann and Kerascoët’s Beautiful Darkness, where a host of tiny creatures struggle for survival.

The scream came from one of the creatures, a feral sort of china doll with an enlarged head, who eats maggots and eventually comes to live in the rotting skull of the very girl from the dream. Feral china doll wakes up grunting, “Nightmare . . . Nightmare!” as if we’re the weirdos for having hoped that the book thus far had been the dream, that the girl was not dead but dreaming the graphic novel’s bizarre horrors.

I’ll admit that the first time I read Beautiful Darkness, I found it morbidly fascinating but too unpleasant to enjoy. I granted, with many online, that the artwork was gorgeous and dramatic, and that the plot was a kind of feminist anti-fairy tale. Still, I felt it demonstrated a kind of casual nihilism I see in lots of contemporary horror.

Then we had a presidential election, and half the country thought they were in a nightmare. The other half said they’d been in a nightmare, themselves, for too long. A host of conservatives screamed, “I told you so” to a liberal consensus. With deep pain and frustration in their voices, they moaned, “You didn’t listen!”

I don’t know how to process the complexities of the divide in this country. I don’t know that I listened well enough, or that, with what light I was given, I used what platforms I had to advocate enough for the good, the true, and the beautiful. Or that it would have made any difference.

But I know I want to listen better, for what it’s worth. And I can start not only with those around me but with this book. How can it change me? 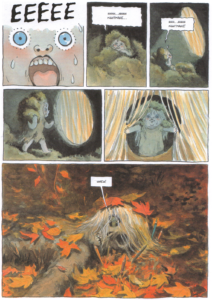 I have come around to believing Beautiful Darkness works as a disturbing critique and warning about the primitive evil that lingers beneath our trite civilities.

The bizarre premise involves the humanoid citizens of a young girl’s imagination escaping her body after she dies, mysteriously, in the woods. Aurora, the fantasy embodiment of the girl herself, takes charge of feeding and housing the refugees, blithely promoting principles of fairness and generosity.

It soon becomes apparent that everyone is prepared to profit from Aurora’s leadership, but no one really shares her values. Rather, each character proves a creature of whim, appetite, and even violent instinct. Those that show any ability to deliberate use their reasoning powers to manipulate others for their own gain.

In the end, Aurora has to decide how best to deal with this host of dangerously destructive imps that seem to keep following her around.

The book is all about people’s blithe indifference to one another’s suffering. Worse, it’s sometimes about direct violence and society’s willingness to shrug it off if there’s something more entertaining to do. One large character literally eats a smaller one. A bystander says, “What did you just do?” but the large creature says, “Wanna play? Look, it’s like I’m pregnant!” and a person’s death becomes a perverse joke.

Characters steal from one another. They torture insects. They kill animals that had previously helped them, then eat their raw flesh. Betrayal is casual, murder is the stuff of games. It’s Lord of the Flies meets Strawberry Shortcake. Except all the Pastry People keep smiling and playing their baked-goods games.

It’s disturbing to think that the “big” folks in our society might consume the “little” ones, in more subtle ways, and somehow the rest of us would be complicit in laughing at it. 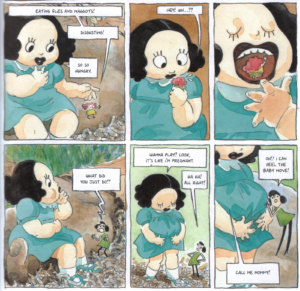 This book does not try to force a message, and there’s no happily ever after in sight. The death and loss are too isolating, and Aurora’s hope seems to lie in a large human male who is associated with many violent images and may have caused the death of the human Aurora.

One way you can read it is as the human Aurora’s imagination living on after her, and her ego, the creature Aurora, doing her best to negotiate growing up in a world made dangerous by nature and cruel by people. If she overcomes, it is not by remaining purely good but by making hard choices maybe we’d rather she didn’t have to make.

Without anyone to teach her better, Aurora learns to “do what it takes” to survive. That’s a phrase used by self-proclaimed realists to justify morally questionable actions, and Aurora, eventually donning the pelt of a former mouse ally, is en route to becoming a tiny dictator of a world of one.

To see justice in the individual, Plato imagined the person as a city and the parts of the self as its citizens. Here, a child dies before maturing, so the parts of herself are arrested in pre-adolescence. If Beautiful Darkness is a parable of human evil, then it takes a rather banal view of original sin as a child’s lack of empathy, distractibility, and reflexive violence without conscience.

The book thus indicts those traits in ourselves as shamefully immature. How, after all, can we hope to train our children in doing good if we continue to act in any way like children? In an age of parents pouting about their children on social media while police shoot black parents’ children, there may be an audience that needs to feel the grotesque but profound disturbance of a book like this.

And may we each take the fanciful Auroras in our lives by the hand and, rejecting vengeance and rage, lead them down paths of righteousness.

Brad Fruhauff is a film buff, comics nerd, literature scholar, editor, and writer living in Evanston, Illinois. He is Senior Editor at Relief: A Christian Literary Review and a Writing and Communications Specialist at Trinity International University where he also serves as Contributing Editor for Sapientia. He has published poems, essays, and reviews in Books & Culture, catapult, Christianity and Literature, Englewood Review of Books, Every Day Poems, Not Yet Christmas: An Advent Reader, Rock & Sling, and in the newly released How to Write a Poem.
<,br>The above images are from the text reviewed here: Vehlmann and Kerascoët's Beautiful Darkness.