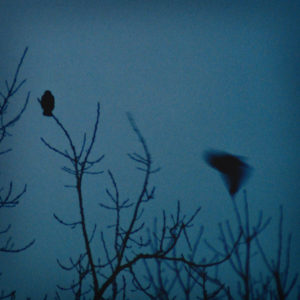 In Kyoto, Japan, seventeenth-century Nijo Castle contains an architectural feature meant to protect the ruling shogun. The floors in the inner most chambers are constructed in such a way that the nails rub together when trod upon, creating the acoustical effect of chirping birds. Known as “nightingale floors,” the sound acts an alarm, providing a warning against enemies attempting to take the shogun by surprise.

The richness of such a design is manifold, as beautiful as it is practical, as charming as it is inspired. Leave it to the people of silk screens and floating worlds to make something so delightful out of a military defense. The Japanese just have a knack for poetic juxtaposition achieved by means of elegant economy, creating eternal wonders within the space of a few square inches—bonsai trees, haiku, etc.

But when a wildly uneconomic Western mind such as mine comes across something like the concept of the nightingale floors, the idea ranges into metaphors and ironies. Oriental simplicity gets “all mussed up” by occidental complication. I cannot leave the “nightingale” alone, but instead must think of all that it implies. Call it maximalizing the minimal.

For instance, I’m put in mind of how much we desperately desire to be warned about the future. No matter what we say to the contrary, by and large, we want to see things coming. For all our talk about loving surprises, most of us dread the damn things like hell. We don’t want people or events jumping out at us from behind a curtain. We don’t want to be taken unawares and swept away.

“Knock first,” we say to life. “Ring the bell,” thank you very much. Give me a chance to comb my hair, put on a shirt, look through the peephole and see who it is. I might need my pistol, after all.

Oh, wouldn’t it be wonderful if our lives would come fitted with nightingale floors? If we could have advance notice of whatever it is that’s coming, we could breathe a little easier. Or so we think (time for another occidental twist).

Because that in turns prompts the question: What good would such knowledge do us? We want to prepare, but would knowledge of what’s coming really help? It depends on whether we can do anything about it, I suppose. Ignorance is indeed bliss if knowledge can only fill us with despair and dread.

On the other hand (another twist yet), at least knowledge of what’s coming could save us from the shock. It would allow us to strategize and mitigate the consequences. But only to a degree; that is, we can prepare against the surprise of some things, but we cannot prepare for the pain that they cause. We will be spared the too-late news of their arrival, but not the agony that will attend it.

When you see a blow coming, you can brace yourself and say: “This is going to break my leg; this is going to chip my tooth.” But until it happens, you won’t really know what a broken leg means—not until the lightning bolt runs up your femur in a unique, customized trajectory, made only for you, along with the illogical, ridiculous contemporaneity of a sensation that someone is holding a torch to your scalp (my own experience with a broken leg).

Some knowledge can only come with encounter, and no preparation or testimony about it will suffice.

Loss is one of those things for which common wisdom says a person should prepare himself. And if you’re lucky enough to get that option, you might be able to stanch some of the more life-altering aspects of losing—whether it be a person, place, or thing of which you are bereft.

But I’m not so sure if that’s really possible either. Like the blow that will break the leg, the hole of grief is separate and apart from the knowledge that the hole is about to be made. Again, it is only the amazement one avoids—not the impact, not the wound.

Perhaps there were times when the shogun could stave off a death that approached him to the sound of night birds, singing in their trees. But that was only because the interloper came too early. The shogun and his men would be too strong on that day, and their force—alerted and at the ready—could turn back the mortal coup.

But on another day, when the shogun was not as strong as that which approached him, he would only be able to spare himself the surprise. He could not stop the sound of his enemy coming closer, or the weight of the steps growing heavier, until they took the shape and form of his end.

On that day, he would have need of other weapons, ones with which he had long practiced. He would need a preparation that did not depend upon the strength of an arm grown feeble, or a retinue become small, but upon the powers of mind and soul, ones that provide another, eternal way to beat that enemy of all enemies.

For our lives do indeed come with nightingale floors. From our first day forward, we hear our adversary advancing in his sonorous fashion, clearly and constantly trudging across the span of time. We are given nothing if not fair warning.

Yet, we often attempt to stop our ears against these alarms, even when we are at our most vulnerable—even when we have every reason to believe that our old foe is near. No matter, his time is always growing ripe; his strength never flags and his purpose is always firm.

So if we are to win this last battle and be more than just habituated to our defeat, we must attend; we must stop, listen, and prepare. We must find some means with which to repel the attack; for really now, it can come as no surprise. Night is falling, the birds sing.

The above image is by Craig Pennington, used with permission under a Creative Commons license.