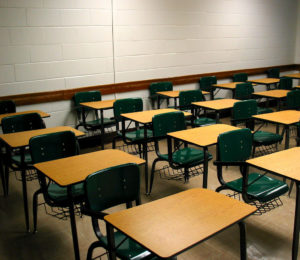 Seven months ago, I was teaching writing to high school seniors at a Christian school on the southwest side of Chicago, thirty minutes from my suburban hometown but essentially in another universe. I was three months away from finishing my MFA through Seattle Pacific University, and I wasn’t sure that I was going to make it—make it to the end of the MFA without succumbing to a mental collapse, or to the end of the teaching year without biting off a chunk of my tongue. There was no established curriculum for the class, so I created many of my lessons the night before, after I finished grading the students’ assignments from the same day.

While this won’t kill you, any education professional will tell you that it’s a recipe for disaster.

One night, between MFA and teaching work, I pulled out a copy of Image and flipped to Chris Hoke’s essay “Hearts Like Radios,” a piece that had jolted my numbed spiritual and creative nerves a few months earlier.

In the classroom, I was at a loss for what pieces of writing to put in my students’ hands. They’d balked at all my favorite stuff, which in retrospect isn’t a surprise. They came from a different world than me, and I could not figure out a way to breech the cultural divide. I stuffed the magazine in my bag and made fifty photocopies of the essay at school the next morning.

While assigning Hoke’s essay in class that day was a last-minute improvisation, it was above all an act of faith. The students, sharp as they were, had grown wary of my attempts to lord canonical literature over their heads like an enlightened shaman. I had to accept that my fabricated mastery of the written word would not ultimately be the thing that broke the ice around their heads. Perhaps, I thought, beauty might break through in the way it had for me so many years before: quietly and through the back window, on little cat feet.

Hoke’s essay was one among many in the pages of Image that nudged me toward new ways of seeing, with writing that was both gracious and bold, images and ideas that unsettled the dust in the basement of my literary mind. To assume that it couldn’t do the same for those students would have been an oversight of tremendous arrogance.

All I asked them to do was find the thesis. Of course they knew what a thesis was, but for months I’d been trying to convince them that a thesis is more than just a summative sentence that you drop into the essay like a fishing lure into a pond, then leave it there while you twiddle your thumbs and talk about nothing in particular.

A thesis should beat like a heart; it should pump blood into every sentence of the essay, turning it into a corporeal, living thing. So, I asked them, what is the heart of this essay? After ten minutes of reading, a silence settled over the room like fog. They leaned over their desks with their pens in hand, scribbling hieroglyphic notes in the margins.

And then we talked about it.

First, they were most struck by the characters in the story: the man in the attic of a halfway house strung out on meth, who swung a golf club around and told the narrator—Hoke—about the things God told him in the dark. Then they talked about the teenage kid who heard a voice that told him to take his father’s life. The students’ voices sounded notes of shock, sadness, and compassion.

The notion that an essay could contain dialogue and scene and characters who reminded them of people that they’d met, on street corners or on the L or in their own families, was a revelation.

We moved forward to the most challenging part of the essay—Hoke’s explication on scholarly interpretations of the Abraham and Isaac story: the first being the traditional interpretation, that God commanded Abraham to kill his son then changed his mind at the last second, and the second, unorthodox one, that the Hebrew names of God in the passage referred to separate beings—elohim; the generic Hebrew word for a god, and then YHWH; the self-revealed, self-breathed name of Israel’s God.

Hoke is suggesting that Abraham might have heard two distinct voices commanding different things, I said, tentatively. Hands shot up. “What the hell?” they said. “What’s the thesis?” I asked. They looked around, pondering the air.

There was a giddiness in the way they were suddenly speaking to each other, as if their unexpected passion and curiosity was surprising even to them.

It was certainly a surprise to me, and one of the few small pedagogical victories I can count from that year.

One girl, who wrote better essays between passing periods than I could’ve dreamed of writing at her age, decided to make part of Hoke’s argument the thesis of her twelve-page senior capstone paper.

She explored the historical link between mental illness and prophecy, and argued, quite eloquently, that the people counted as prophets in the ancient world bear a striking likeness to the people who we shuttle to the margins of our society, deeming them insane. She referenced Abraham Joshua Heschel.

The essay made me cry, and won her a scholarship that would cover the cost of textbooks during her first year in college.

About a week later I was offered a job at Image, and within a month I was in my Volkswagen on the way to Seattle. Most of my students went off to college. For a while I wrestled with the nagging thought that I had taken the easy way out, that working for a literary arts quarterly was to step away from the front lines, away from the written word in its most vulnerable, critical habitat: the classroom.

The underlying assumption here is an arrogant one—that I was the one responsible for the way my students took to that essay like ducks to water, their feet churning madly beneath the surface. It was an accident. Built on trust and an engaged understanding of who they were, but an accident no less.

When my own tiny reservoir of passion runs dry every six months, I have to remind myself that this is how literature, and beauty therein, survives.

Not through the Herculean efforts of an isolated few—the writers or the professors or the publishers—but through small, seemingly inconsequential moments of stewardship and trust. Lending a book and hoping you never get it back, editing the work of a young and hopeful writer, supporting a literary journal that shares your vision—a handful of small, good things leavening unrisen dough.

These small acts of faith are responsible for the seemingly serendipitous survival of beauty; they’re origin stories, like Peter Parker getting bit by that spider. Every beauty-lover I know has one of them, each one wildly different in plot, but animated by the same heart.

Mine goes like this: In my first aimless year out of college, a mentor puts a copy of Image in my hands, mentioning a Christian Wiman essay he thinks I’d like.

Three paragraphs in, a line lodges itself in my ribs like a dart: “except for that terrible, blissful feeling at the heart of creation itself, when all thought of your name is obliterated and all you want is the poem, to be the means wherein something of reality, perhaps even something of eternity, realizes itself.”

I read the entire issue, then flip to the back cover and see an ad for the SPU MFA program, and apply on a whim, craving contact. I get in, and copies of Image start inconspicuously showing up on my doorstep. I read the poems and essays in between books and during lunch breaks as a substitute teacher, like a forager hoarding exotic berries.

I move to New York to intern for a literary agent and bomb out seven months later, then stumble into a high school teaching gig back in Chicago.

Within a year I’m standing at the front of a classroom, listening. “What’s the thesis?” I ask them. “What’s the heart?”

Keep the beating heart of Image alive: make a donation today. Your support makes a bigger difference than you know.

A native of Naperville, Illinois, Paul Anderson receieved his B.A. in English from Westmont College in 2013 and earned his M.F.A. in Fiction from Seattle Pacific University in 2016. Among other things, he’s worked as a writing teacher and cross-country coach in Chicago, a publishing intern in New York, a teacher’s assistant in Italy, and a barista in Santa Barbara. His work has appeared in Relevant, Ruminate, and Westmont Magazine.

Image above by Christopher Sessums, used with permission under a Creative Commons license.