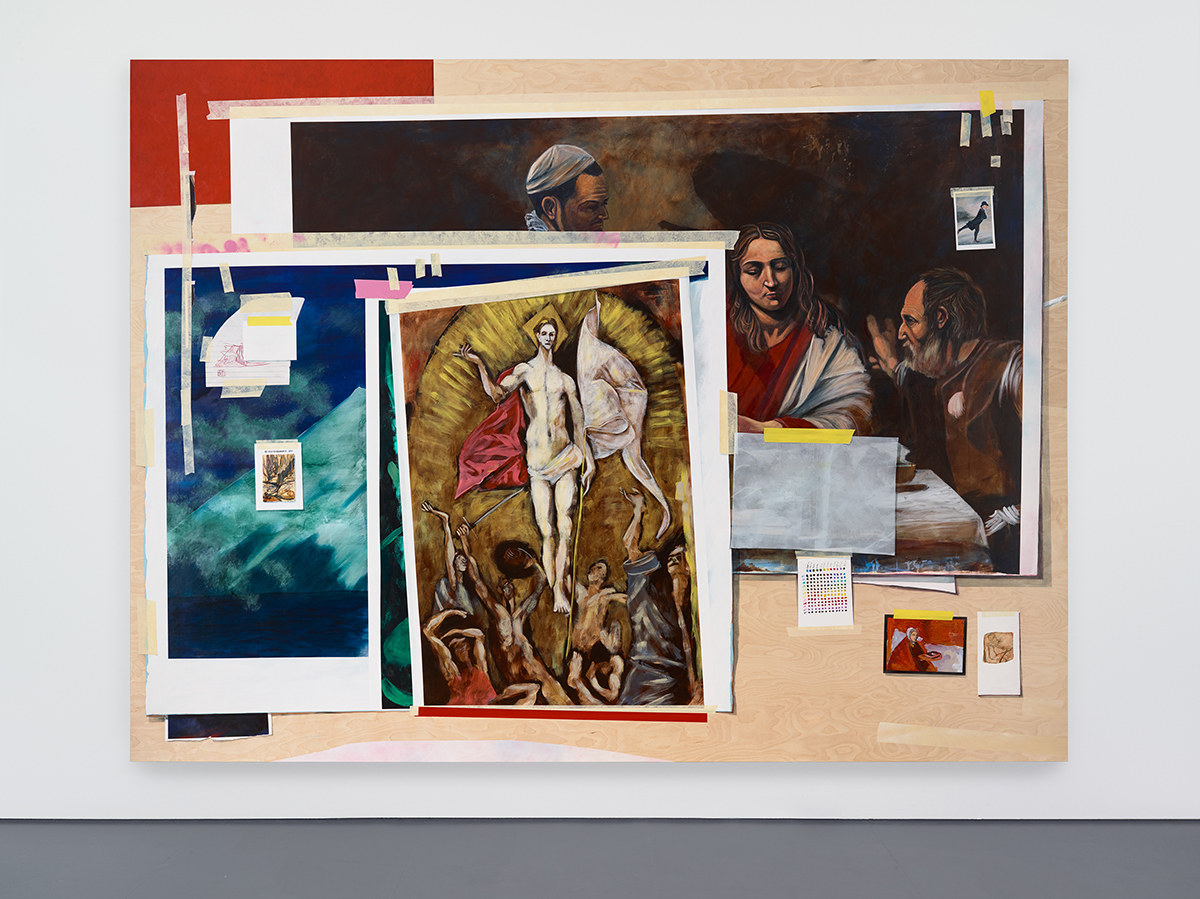 Alastair John Gordon, “They Lying Long Shall Not Die Windily.”

Historically, modern art has prized originality and authenticity. But alongside this tradition runs another set of practices: replication and tactics of illusion. The Romans made copies of Greek sculptures; Northern Europeans in the seventeenth century practiced an illusionistic approach to still life painting called quodlibet, or “what you will”; American pop art reproduced images of mass-produced, consumer goods.

Alastair John Gordon’s work is indebted to these traditions and to mass media print culture. The London-based artist’s new body of work draws on the postcard collection of Howard and Roberta Ahmanson, philanthropists and art collectors in L.A. Their collection includes mementos from their travels, scenes of architectural interest, and reproductions of works of art—over 18,500 postcards in all.

His trompe l’oeil renderings of postcards, sketches, and residual papers raise questions about authenticity and representation. The artist sees the work as a form of hyperreality, a term coined by Umberto Eco in 1975. This is the realm of the “authentic copy,” where the illusion is total and the skill of the hoax is part of its charm.

At a time when the American public is spooked by fake news and alternative facts, this body of work invites the viewer to consider the roots and repercussions of fakery.

I spoke with Gordon by phone and over email to discuss his interest in both the gallery and the gift shop.

Nicole Miller: Why did you want to work with the Ahmanson postcard collection?

Alastair John Gordon: I met Roberta Ahmanson eight years ago at a conference in Hungary where I was giving an artist talk. Roberta was in the back of the room. Though I didn’t know who she was at the time, I noticed that she seemed very animated and enthusiastic about my painting. The following month, she was in London, and I invited her to my studio. She bought two paintings on the spot. I was stunned.

We got to know each other, and she and Howard have become two of my most supportive collectors and friends.

A couple of years ago, I painted a group of postcards for an exhibition in London, and Roberta really liked the painting, but someone else had already bought it. We started talking about postcards—a postcard costs a dollar or one pound fifty, and you can collect them and put them on a refrigerator or the wall. You kind of curate your own art exhibitions, and suddenly these throwaway objects begin to gain value.

Roberta invited me to come to L.A. to look at her postcard collection and maybe make some paintings. As I began looking at the postcards—there were thousands of them, laminated and catalogued and filed—what struck me was that it’s a little bit like the Victorian tradition of collecting icons from around the world and bringing them together in a cabinet of curiosity.

Like the old wunderkammer—a collection of ideas and philosophies and art from around the world. 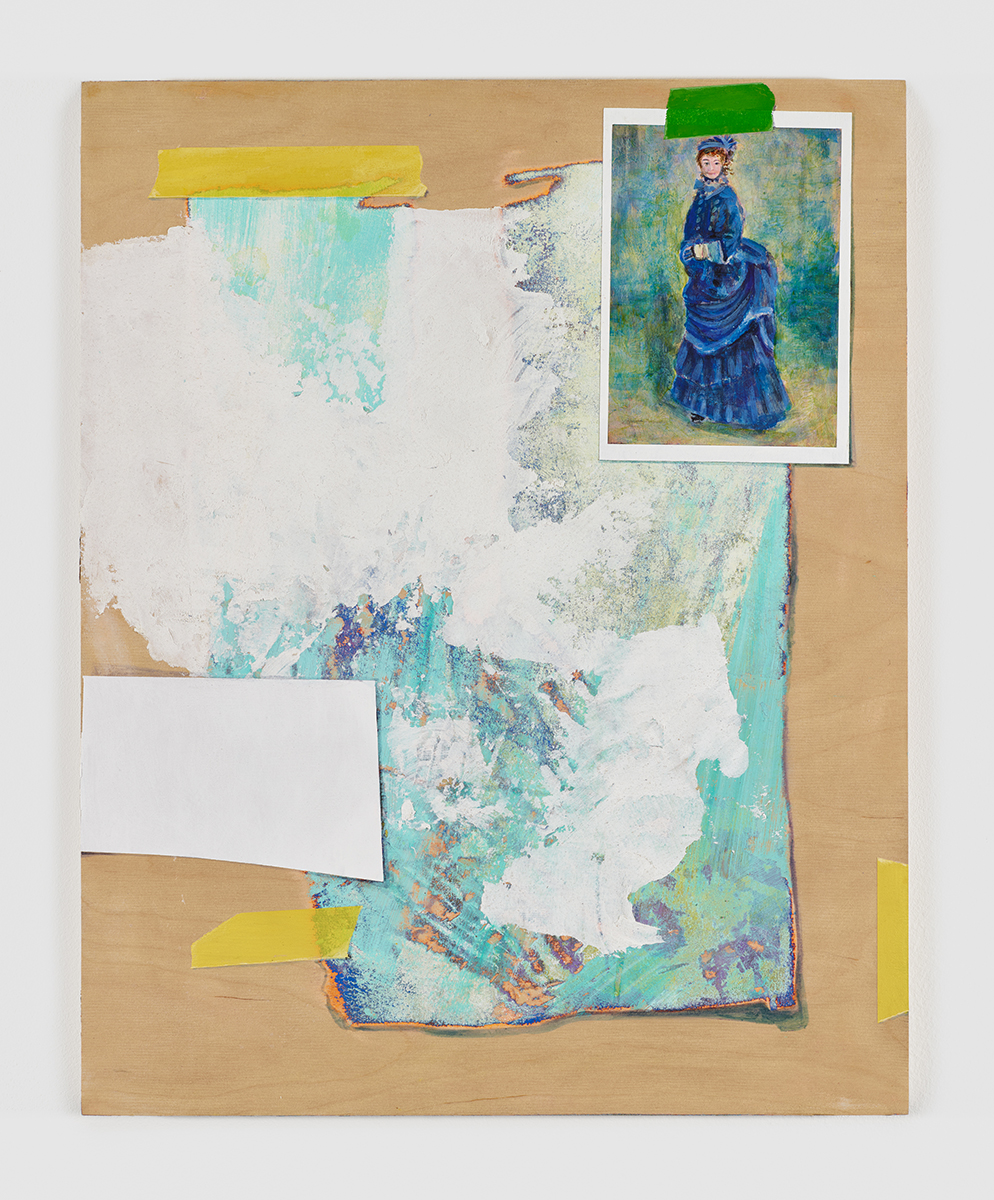 Alastair John Gordon, “Everything We Have Chosen Has Been Granted To Us.” Oil and acrylic on birch ply. 50 x 40 cm.

NM: How did you choose which postcards to paint?

AJG: In general, Roberta and I found most interesting the scenes of biblical paintings. We often talk about this curious absence of biblical imagery and language within the wider corpus of contemporary art. Today, it’s somewhat taboo to use these images that have dominated art history for centuries.

I’ve never painted biblical scenes until now, and it’s causing all kinds of problems. How does one represent stories or ideas from biblical texts in a way that relates to the history of that tradition in Western painting, but also steps away from that type of visual language in a very contemporary sense?

NM: When a work of art gets reproduced in the form of a postcard or some consumer good, the replica enters the realm of kitsch. What happens when you create a replica of the replica?

AJG: John Berger, who we lost this year, writes so beautifully about what happens when we take an image from antiquity and slap it onto a poster and recontextualize it as such. You don’t approach that image the same way you would if you went to see it in a church or in an art gallery. The image enters into this wider democratic arena of images, where more people can see it.

This doesn’t devalue the image, but changes the way we approach it. (In some ways, the postcard is similar to what happens on Instagram.)

Oil and acrylic are permanent and esteemed as something that will be looked at for many years. When you paint something in a figurative, still-life tradition, it somehow elevates that subject matter. What I do is return the throwaway postcard back to the “original, authentic” painting, which gives it that sense of elevation.

There’s this interesting Reformational idea of the sacrament and how it can embody transcendent ideas. In the Christian Reformed tradition, we think about bread and wine at the communion table transcending the materials of flour and grapes and water to become something more.

I guess I see a link between that and a late-modern idea in painting—this Greenbergian notion of the pigments and the paint scraped over a canvas that surpass their material parts. As I paint these things, I’m trying to hold together this sacramental idea with this late-modern, abstract expressionist idea. 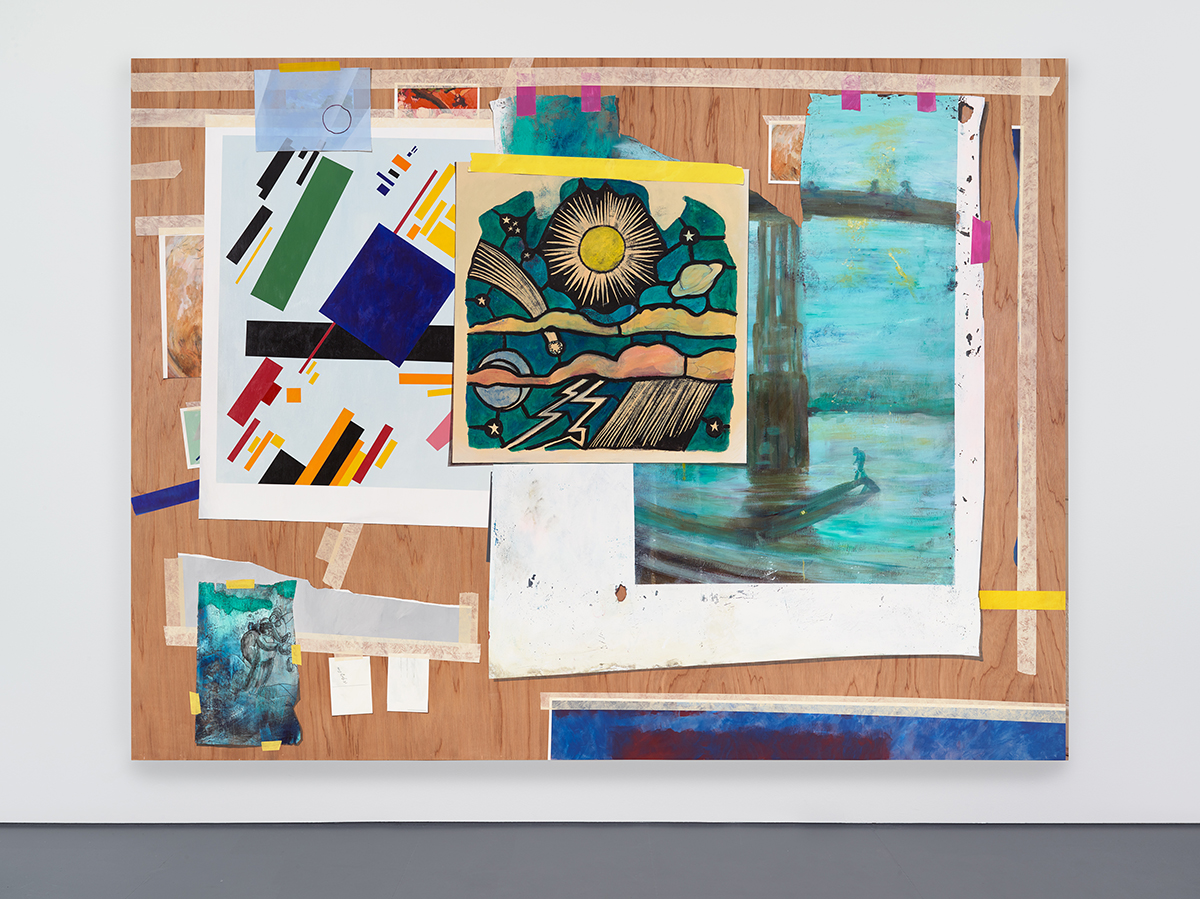 Alastair John Gordon, “I Will Show You Fear in a Handful of Dust.”

Interview to be continued tomorrow.

Nicole Miller is a Brooklyn-based writer, editor, and teacher. A former Milton fellow at Image, she's also received residencies from the Wassaic Project and the Marble House Project. Her fiction and nonfiction have appeared in Guernica, Fence, Image, The Atlas Review, Hyperallergic, and elsewhere. She serves as an editor for the digital journal Underwater New York.