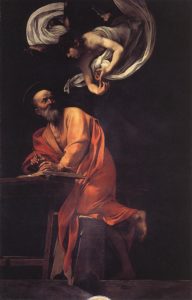 February is offseason in Rome, so today the city is a little gray, a little quiet, if ever it could be such a thing. I’m standing on the steps of San Luigi Dei Francesi church, buzzing a little from a sugary espresso.

I’m gearing up to enter the church and see, for the fourth time in my life, one of the most gorgeous triptychs ever painted: Caravaggio’s Life of St. Matthew, comprised of The Calling, The Inspiration, and The Martyrdom of St. Matthew.

I’ve thought about these paintings so many times since I first saw them as a doe-eyed twenty-one-year-old that I can conjure their presence as fast as I can start my car:

Matthew at a table strewn with coins in a dark tavern, a slice of light preceding a burly Peter and a chiseled Jesus, who lifts a languid finger towards him; gray and bearded Matthew hunched over a scroll with a quill, an angel hovering above his head; Matthew splayed over a pit, one hand up, waiting to be stabbed a second time.

The only problem, aside from a stabbing pain in my right foot, is that there are two Italian soldiers guarding the church doors. They have berets perched on their angular heads, looking both jovial and severe; one of them is smoking a cigarette, the other is making funny faces at a toddler. They wear bulletproofs vests over their thick chests and over those they hold matching M-16s.

I am wearing a silly brown hat with a wide, flat brim, which serves the triune purpose of keeping the Roman sun off out of my eyes, covering my bald spot, and declaring, if it wasn’t obvious enough already, that I am an American.

I booked the trip five months before, prophetically aware that Februarys tend to usher in my annual dark night of the soul, and also because my novel-in-progress is set in Rome. This year, February’s night rolled in a few weeks before Thanksgiving, and by the time I hop off the plane, the novel, presently titled My Bad Italy Novel, is a wounded animal whimpering behind me.

For the first few days, I’m wondering what business I have writing a novel at all. The city’s beauty eludes me. In the face of my foreignness, my ignorance of this place, my hope for inspiration now feels thin and immature. Planning to be inspired is like counting on a comet.

The day before I arrive on the steps of that church, a man enticing guests into a crappy restaurant on Piazza Navona salutes me and says, “Ciao, cowboy.”

I immediately want to throw the hat in the trash. It’s not a cowboy hat. I’d hoped it was more a Walt Whitman sort of deal.

I wrestle that entire day with the thought that I have no business here, that my voyeuristic journey into such a historic and rich culture is a projection of disaffection for my own. By midafternoon, I conclude that it’s time to trash My Bad Italy Novel along with my hat. Both are embarrassing. I’m also fairly convinced that my right pinky toe is broken at the bottom knuckle.

By nightfall I’ve developed a limp. Still, I wander into an evening mass at Santa Maria in Trastevere, the oldest church in Rome, and listen to the Italian liturgy echoing off the medieval walls. Besides Gesu, Padre, and Dio, I don’t catch a word.

I put my hat on as I step out of the church, and a young priest on his way in nods. “Buon capo!” he says. Good hat.

The next morning I take the wrong bus to a distant northern suburb, and spend the better part of the day cobbling together bus routes back to the city center, my right foot aching like a cruel joke. It’s well past midday by the time I reach Santa Maria dei Francesi.

And there are the guards with their assault rifles. At first I take it as some sign that I should not, or cannot, go inside. Whatever is going on inside is no longer for me. The church and Caravaggio’s paintings, which once had such an invigorating effect on my mind, are off limits to disillusioned young Americans.

But quickly I assemble the clues. I’d seen military personnel at other historic spots all over Rome, intuiting that they were watching for terrorist activity. But I hadn’t seen them at any churches.

Then again, none of those churches had Caravaggios inside. Suddenly I recall the first widely publicized incident of ISIS destroying priceless works of art in a Mosul museum, and it all becomes clear: the soldiers aren’t prohibiting entry; they’re protecting the paintings.

I move towards the doors, expecting some kind of pat down, but they part to let me through.

“Signore,” one of them abruptly says.

“Your hat,” he says, lifting his beret from his head. “You must take off.”

I happily oblige, and step into the church.

This moment, this entry, is the secret to enduring Rome—exiting the chaos that makes you feel small and alone and entering silence, a space of shared humanity. The reason it’s protected is the same reason some zealots might seek to destroy it: beauty is a threat to evil.

I make my way down the center aisle, looking toward the side chapel that houses the paintings, in the far left corner, covered in darkness.

In the dark I can barely make out the outlines of the paintings, so I dig in my pocket for a Euro to turn on the sixty-second light.

Light engulfs the panels and it’s just like I remembered. But it is so much more urgent. My eyes scan left to right, right to left—call-work-death-death-work-call. Before, the paintings were isolated incidents, The Calling the most memorable and inspiring. It is, after all, the most famous. It is the thrill of starting over.

But The Call is irrelevant without the nearly schizophrenic isolation of The Inspiration and the brutality of The Martyrdom. The sharp light from Christ’s finger to Matthew’s shocked expression is connected to the assassin’s slanted blade. There is no denying that Matthew’s acceptance of the call is at once his inspiration and his death wish. This time the paintings tell me: carrying that light may get you killed.

The light clicks off and the chapel goes dark again. I hold my hat with both my hands.

A native of Naperville, Illinois, Paul Anderson receieved his B.A. in English from Westmont College in 2013 and earned his M.F.A. in Fiction from Seattle Pacific University in 2016. Among other things, he’s worked as a writing teacher and cross-country coach in Chicago, a publishing intern in New York, a teacher’s assistant in Italy, and a barista in Santa Barbara. His work has appeared in Relevant, Ruminate, and Westmont Magazine.

The above image is by Caravaggio, [Public Domain], via Wikimedia Commons.