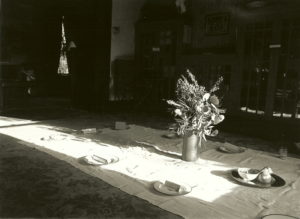 “In what ways do you experience the presence of government—city, county, state, federal—in your life, your daily life, your professional life?”

That’s how we began, with that question. Asking questions, that’s the practice, isn’t it, that leads to liberation? And that’s why we were there that night, wasn’t it, to recount an experience of liberation in the past and to take the first steps toward our own liberation—personal, communal, national, global—in this moment?

A journey that would begin, as it does every year, around a beautifully set table, crowded with symbols, weighed down with books—one on each plate, with history, with a story that isn’t a story, with blessings and plagues, with songs that anchor us with knowledge of who we are and lift us up with rousing melodies.

Except that this year (why was this year’s Seder different from all other Seders?), the Haggadahs (the books), were stacked out of view in the corner of the room as the guests arrived. In their place, afloat on each guest’s plate, was a single sheet of paper on which was printed a seal—the city of Asheville’s seal, or Buncombe county’s seal, or the State of North Carolina’s seal, or the seal of the United States of America.

The presence of government at our Seder.

The Hebrews in Egypt knew who they served, brick by brick by brick. They returned to their homes at night, where they rested so they could serve another day, serve Egypt and its rulers, its form of governance. Rest to work: there was nowhere they could turn—exhausted, defined, confined—where they did not experience government.

The rabbis of Bnei Brak, their first century CE Seder lasted all night. It wrapped up only when a few of their students charged into the room and said, rabbis, rabbis, you need to finish the Seder! It’s nearly time for saying the morning prayers.

What were they talking about all night? What fine points of rabbinic argument were being made at their Seder table? Some commentators speculate (it says so, right in the commentary section in the margins of our informative Haggadah) that the rabbis of Bnei Brak were plotting a rebellion against their occupiers, their oppressors, Rome.

On this night, the first night of Passover 2017/5777, we could be inspired by these rabbis—who themselves were informed and inspired by the story of the Jews’ liberation from Egypt—to plot our own rebellion against our Coppertone Pharaoh and the princes and popes of our North Carolina State legislature. But not against Asheville’s dear mayor, our friend, our brilliant, courageous, energetic, progressive, sensible, young mayor, Esther, whose mother, also our dear friend, was with us for the Seder.

(Oh Asheville, oh bubble, here we are free, somewhat free—if we’re white, if we’re wealthy, or know how to work around the rising, sprawling, crowding wealth, the wealth crouching on our mountain tops. Here we fight for everyone’s right to liberty, justice, and the pursuit of happiness. Here we fight for and celebrate equality!)

Or, on this night, we could take a cue from Rabbi Abraham Joshua Herschel teaching in his essential book The Sabbath and practice kindling no fires, not even the fire of righteous indignation. If it’s good for the Sabbath, it could be good for the Seder.

Thus, an additional instruction for the Seder: please share your experiences of government in a descriptive, not an evaluative or judgmental manner (this law discriminates against the Ts of the LGBTQ communities, these voting districts are racist…).

Could our holy rage against the government fuel our fight for liberation, or might our understandable yet predictable reactions to news of this executive order or that move by the Justice Department be yet another cause of our imprisonment?

Signs—in English and Spanish—in bathrooms reminding restaurant workers that they are required to wash their hands. Sidewalks along city streets. Readings by graduating creative writing majors whose college educations were paid for, in part, by Pell Grants. The presence of government in our lives.

Inspired by our singing and the song’s insistent theme, I asked, right after we finished singing: “What’s enough government?”

And folks responded: Equal access to good health care for every citizen. Regulation of the airline industry to ensure the safety of air travel. Seat belts.

North Carolina’s HB2, the so-called bathroom bill, that required people in government facilities to use the bathroom matching the gender indicated on their birth certificate.

The Seder can be a time of nostalgia—remembering the Seders of one’s childhood, rote performance of rituals, dipping parsley in salt water, making the Hillel sandwich, maror (bitter herbs/horseradish) and charoset (a paste-like dish, like mortar, made of chopped fruit and nuts) between two pieces of matza (unleavened bread). Or the Seder can be an invitation to draw on the teachings of Passover to work toward the liberation of all people in our place and time.

“Let us begin by distinguishing between fact and feeling, fact and story,” I said. “Let us begin by looking clearly at the presence of government in our lives. Let’s step outside our principles for a moment, principles that inform our assessment of what’s harmful and what’s helpful in government, just for a few hours and see what happens,” I said.

Double yellow lines striping the middle of Kimberly Avenue. Vouchers for daycare. The presence of government in our lives.

Above image by Doug Geisler, used with permission under a Creative Commons License.