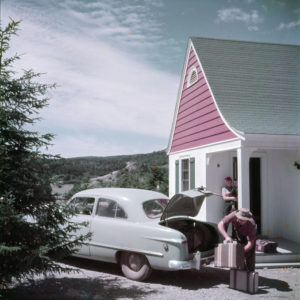 The cabin where my husband and I are having a weekend getaway is on the border of Wisconsin, on the lip of a rustic lake where two canoes stick out of the water like discolored buckteeth. They are tipped upside down at the crook of a thin tilted dock. When my husband turns one of them over for us to take a ride, the sharp edge of the canoe scoops the cold lake water into its base.

At thirty weeks pregnant, the canoe is too heavy for me to help him shake out the water. Not that he needs me to; my husband is strong from farm work and genetics: he is handsome, rustic, and a little melancholy just like the lake on the cusp of spring.

Soon, warmth will tug at the life available in the soil at the edges of the water—it will be drawn through the branches the way the boat drags through the weeds and water to the dock so I can embark, unbalanced and heavy with the extra weight around my middle. If we stuck around for a few more weeks, I imagine we would see life manifested around the perimeter of the lake in buds of color on the trees, and we wouldn’t remember the flat hues of winter: brown branches, un-raked gray leaves, sallow skies sagging with rain.

On our car ride to this cabin, we listen to a podcast interview with Andy Crouch who has written a book on ways to set healthy boundaries with technology in families. My husband and I talk over our strengths and weaknesses in this area. We don’t have a television so channel surfing and the twenty-four-hour news cycles aren’t a part of our background noise. The video games and Netflix shows we do allow our kids to digest are usually regulated and we don’t ever have our screens at the dinner table.

On the other hand, we are too late to keep screens from our kids until they are aged ten (as the author of the book did with his family) and I’m apparently already failing by allowing my two year old to watch Umizoomi on my iPhone in the morning, just so I can rest after the older kids have caught the bus to school.

As we talk, I wonder if it is mostly my own habits and not my children’s that need to be limited. My unhealthy screen habits range from binge-watching shows like the superhero drama Arrow or the political drama Madame Secretary on Netflix while my husband is away at seminary two days a week, to sometimes checking the online news in bed on my phone, letting in the anxiety of world-wide turmoil and the artificial glow of the screen just before sleep.

Sometimes the television shows and the glow of the screens lead me into an experience of hypnagogia when the transitional state between waking and sleeping produces sleep paralysis, hallucinations, and lucid dreaming. In other words, I see things in the dark: villains emerging from the closet, or the curtains, or my husband’s dress shirt hanging on a hook. As I read about this state of consciousness on Wikipedia, I come across something called the “Tetris effect” that seems to explain my night visions pretty closely: “People who have spent a long time at some repetitive activity before sleep, in particular one that is new to them, may find that it dominates their imagery as they grow drowsy.”

Maybe it’s good thing that we’ve chosen to stay in a cabin with no Internet for two days.

Instead of binge-watching a TV show, I binge-read a novel (is that a thing?). The 19th Wife by David Ebershoff is a novel with two intersecting narratives, one a murder mystery involving a present-day polygamous cult and the other based on the life of one of Brigham Young’s wives, Ann Eliza, who divorced the Mormon patriarch and went on a crusade against polygamy.

In between journaling and prayer, I spend these quiet, Internet-free hours reading the long book, imagining how angry I would be if my husband decided to take another wife. While he sits in the adjacent room, I picture myself raging and crying at my poor innocent husband as if he decided to concede to the prophet’s revelations of polygamy. I begin to wonder if in her seemingly hopeless situation, I would make the choice to leave like Ann Eliza, rejecting not only an awful polygamous husband-prophet but leaving my community, my home, and even my precious children.

The parallels to my own life slip and slide between these awful imaginings: maybe I picture myself raging at a man I love so deeply because my own father has recently died and I’m angry at him for leaving me; though I have a loving (and thankfully monogamous) husband and I would never leave my children behind the way Ann Eliza did, it’s true that we will soon be leaving behind our own community and our home of eight years.

That night after we’ve been asleep in bed for a few hours, I wake suddenly and glance through the open bedroom door. The moon off the lake leaves a glow through the sliding door and I think I see a Sister Wife slip around the corner into the kitchen. Perhaps she’s prepping a meal for her thirteen children. Maybe she’s leaving her husband’s room after their once-weekly conjugal visit. I hope she’s preparing her escape, and finding a way to take her children with her.

It seems that whether I binge-watch TV or binge-read a novel, the effects on my brain are quite similar: hypnogagia and the Tetris effect. I suppose I would’ve done better to find silence by reading Wendell Berry’s Given, a book of poetry I brought with me.

Christiana Peterson grew up in Texas and received a PhD in Creative Writing from St. Andrews University in Scotland. She has published pieces on death, fairytales, and farm life at Art House America, her.meneutics, and cordella. She lives with her family in the rural Midwest where she is learning the joys and challenges of church and farm life. You can find more of Christiana’s writing on her blog at christiananpeterson.com and follow her on twitter.