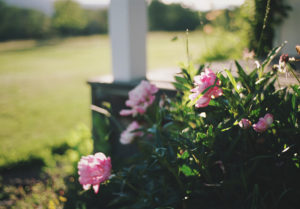 I met a little boy new to the neighborhood this evening when I was pulling weeds in my yard.

“Why are you in the dirt?” he asked, trundling to where I crouched.

“So that there’s there more room for the flowers.”

By that time his mother arrived. “He’s three,” she said. “We hear a lot of why.”

His whys—genuine, curious—were so different from the put-out version of “Why?” I’d asked just a few days before.

It happened when my husband and I were flying home after four nights and four days in Central California settling his eighty-five-year-old mother into her apartment after a three-week hospital stay. Four nights and days when he moved furniture and tackled paperwork while I cleaned and bought groceries, dusted and de-cluttered. Nights when he monitored his mother’s breathing while I slept at a friend’s, days when we spoke exclusively about grab bars, oxygen saturation, medicine scheduling, and other minutiae of caregiving.

My husband boarded two groups before me. When I finally trudged in with my suitcase (we hadn’t budgeted time to check bags) I looked well back, expecting to find him in our usual vicinity behind the wing, until I heard my name, and there he was in the third row.

There was no room for my suitcase anywhere nearby, so I staggered back several more rows, hoisted my suitcase into the overhead bin, then turned toward my row.

“Sorry, sorry, sorry,” I grumbled at each passenger I squeezed past. And I was—sorry the entire boarding process of our already delayed flight had been delayed further by my thoughtless husband.

I plopped into the window seat he’d saved for me, turned toward him, and nearly growled: “How could you do this to me?”

“I thought you’d like a seat where the view wasn’t blocked by the wing,” he said.

Flying from Seattle and San Jose he always chooses a seat facing east so I can spot Mt. Rainier and the volcanoes of the Cascades as we wing south. For our return he’d chosen a western-oriented seat so I would have a clear view of the sunset over the Olympic Mountains.

I leaned back in my seat, robbed of any reason to fume at my husband. I fumed anyway.

My husband closed his eyes as we began to taxi and promptly fell asleep.

I looked out the window as we looped out of San Jose over the rolling Diablo range, brown and dry as I felt from the long days of cleaning and worry. As we reached altitude, the sun began to glare in my eyes, so I lowered the shade leaving a small swath of light and interrogated myself.

Why had I lashed out at my husband?

Because I couldn’t be mad at his frail mother, or her caregivers, knowing full well that in a few weeks her apartment would be almost as messy as I’d found it, my efforts wasted.

Why did it matter so much to me?

And why do I need to keep her alive?

Because I am afraid: afraid to say goodbye to this woman who welcomed me so generously into her big family thirty-five years ago; afraid to bear my husband’s grief after she’s gone.

This is invariably true: fear lurks beneath my anger; and along with fear, the knowledge of my helplessness. I’m not in control of anyone or anything—from where I sit on a plane to how long my mother-in-law will live.

With my questions answered for the moment, my anger dissipated. The sun sank below my eye-line and I opened the shade, surprised to find a vivid red sky. It reminded me of an old ride at Disneyland where you supposedly shrunk down and travelled through the human body, as if the plane were speeding through a blood-tinged atmosphere, as insignificant as a single cell.

After sunset we began our descent into Seattle, and soon the Olympic Mountains came into view, a ribbon of neon pink fringing the jagged peaks. I craned my neck at the window for the rest of the flight, no wing in my way.

It was the most beautiful sunset I’ve ever seen. And it felt like a gift from God—a gift, in view of my behavior, that I most certainly did not deserve—the very definition of grace. The grandeur of the sky, the sun, and the mountains were a counterpoint to my human-scaled struggles, a reminder that life holds so much more than I can ever orchestrate or imagine.

“Why are these in the dirt?” the neighbor boy asked, picking up some spent rockrose petals.

“They fell from the plant.”

“Why did they fall?”

Can we ever craft an adequate answer to that question?

“The flowers get tired and the petals drop off and they are still beautiful,” I said, thinking of my mother-in-law who, while I was having this conversation, was on the phone with my husband, telling him she’s ready for hospice care.

The little boy let the petals go. We both watched as they fluttered to the ground.

Above image by Danielle Nelson, used with permission under a Creative Commons License.