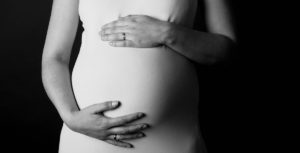 One of the first official symptoms of pregnancy is an out of character desire to work story problems.

If Eve is forty-one when she discovers she is pregnant, how old will she be at the infant’s birth, and when baby starts kindergarten, and when baby leaves for college?

If Eve is sixty when youngest child flies the coop, how much time does she have to pursue the career she always thought she might have when kids left home? If Adam, who is much older than Eve, wishes to retire at a reasonable age, how much more money will he need to make to pay for seventh child to attend college? How many vehicles does it take to get a family of nine to church?

The answer to one of those problems I never foresaw is that my oldest two children could potentially have drivers’ licenses within a year of baby’s birth, meaning we probably wouldn’t need to buy a larger car. And within three years of baby’s birth, they’d be out of the house, so maybe we could also get by without adding onto the house. We’ve made it this far on one bathroom.

All of the logistical concerns were starting to look pretty neutral. There was only left to manage my diabetes and the mild congenital heart defect that could cause me to drop dead at any moment. Things were going to be okay. They were going to be okay, because my death would not be my problem.

Of course, I’d envisioned the possibility of receiving this news in my old age, and I’d hoped I could receive it like Sarah in the Bible, with laughter. I know laughter is a many-shaded response that only rarely connotes unadulterated joy.

Laughter can be wicked, sadistic, revealing nervousness, or shame. Some people laugh to punctuate a sentence, or a particularly well-made argument. But I am most prone to laugh at irony. Whatever you want, God. Whatever you want.

The pregnancy didn’t stick. Almost as soon as I’d discovered it, it began to slip away. It felt important to mark the brief life by spending at least one day in bed.

I wanted to wait until Adam returned from a business trip to go for a blessing from our priest, but I knew it would be too late, that the pregnancy would be gone by the time he returned. There would be no body. There would be nobody.

There could be bloody tissue, I suppose, but it’s stressful, maddening, trying to figure out which bloody clot contains the life. I’ve been there before, and I’m not taking a bag of bloody cells into the sanctuary for blessing.

I wanted to take myself, whole and intact, still containing the life, to perform the ritual. Let us be blessed while we are still together, still a part of one another, before I bleed you out. This way, I know you have been blessed in the flesh.

Every tragedy needs an enemy to supply the piquancy, even when the bloodletting, like the begetting, has no real foes.

Adam didn’t come home when I told him I was bleeding. It would’ve cost a plane ticket, and what could he possibly do? One doesn’t really need help having a miscarriage, especially one this early. If I’d waited one more week to take a pregnancy test, I might never have known.

But his presence would have meant something.

Presence being the one attribute of God we possess through no peculiar effort or grace. All who walk the earth, believer or unbeliever, sinner or saint, contain within their person the redemptive capability of being an “I Am” to another person. Presence saves. It contributes to the communal memory. It builds an ark, two by two—your sorrows and mine preserved in our one flesh.

But in some way, I collude with his absence. I benefit from his work that allows me even to imagine welcoming another child with laughter. When misfortune strikes, material benefits somehow reveal their paltry value in relation to presence.

Through my closed eyes, I saw a light, spreading like an inkblot, the red-light of sun through eyelids—and with it a presence—the woman—and I said, “Take care of my baby— all of my babies—all the ones who have gone before—all the ones still here. Take care of them.” She said she would, and then she was gone.

I wanted to tell someone about it, but there’s no one who wouldn’t think I’m crazy. And what subliminal philosophy is at work here, envisioning the presence of the woman in the absence of the man? O Mary, New Eve, ever comforting her afflicted daughters.

When you become pregnant, life as you know it changes. All the previous dreams are revised to make room for the new. Some dreams are erased completely, and the new life takes shape as a positive reality. It was unexpected, perhaps not especially desired, but you’ve adjusted your expectations, you’ve expanded your soul to accommodate a new person. You’ve submitted to the expectation of pain or hardship.

And then it’s gone. Even though nothing has changed in the exteriors of your life, you have a ghostly absence, a void. You have expanded, and that space won’t be filled.

Saint Augustine defined evil as the absence or privation of the good. Evil is nothing. Evil is what’s not done, that which does not come to fruition.

Forgiving an absence can be especially difficult because there’s no particular language for the offense. And with miscarriage the mother never knows precisely where to project her ire or her mercy—towards God? Her spouse? Herself?

I forgive not being. I forgive presence withheld. I forgive the not-giving of life.

Somehow you have to circle back to creation. Somehow, you have to get back to laughter. The only thing worse than experiencing a void is remaining there.

Turning evil into good—that’s God’s work entirely. The only ingredient I can add, again, is presence. Keep showing up to life, to marriage, to prayer. Keep making myself available for whatever germination may be in the plan of God. It’s almost too easy, and yet still too hard.

Above image by Tatiana Vdb, used with permission under a Creative Commons License.