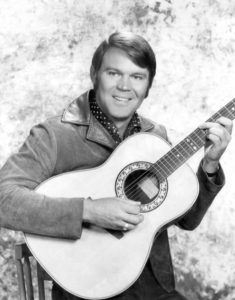 I will not claim credit for many things, but one virtue I own is that you can’t make me disloyal to that which I’ve grown attached. Even in my youth, when it was very important to me that I like what everyone else liked, I would not detach myself from that to which I had given allegiance. And the deeper the love, the more fiercely would I hold tight. Once I’m in, I’m in.

To wit, I am a Glen Campbell fan; many people are, so that’s no great claim to artistic insight. But I was from an era when Glen’s country crossover stylings were considered passé, at best. I was part of a crowd that jockeyed for chances to mention the latest alt-rock band and be familiar with some indie coffeehouse soloist before anyone else was.

The music snob is a type everyone has come across (there’s a hilarious Portlandia skit on such people, set in “Shooting Star Preschool,” with parents one-upping each other on their inside knowledge of cool music). Still and all, even back then, I would fight someone over Glen Campbell (and Burt Bacharach too; I love Burt Bacharach songs).

I think it began with his TV show, The Glen Campbell Goodtime Hour (can anything be more seventies that a variety show called the Goodtime Hour?). Young as I was, I loved the intro to the program, when Glen and his musicians would be spaced around the audience, out in the seats, then stand up all at once from among the crowd, playing their instruments as he began singing his signature song, John Hartford’s “Gentle on My Mind.”

“Good evening, Ladies and Gentlemen,” he would say, through the picking and the strumming, “I’m Glen Campbell.”

You can make too much of such things, I guess, but it seems that this gesture—coming out of the crowd—was a metaphor for the genius of the man’s music. He was always part of the everyday throng, and never truly left that side of the stage. His music spoke the tales of wanderers, such as the itinerant dreamer in “Gentle on My Mind”; of wistful matrons, as in “Dreams of the Everyday Housewife”; and even of soldiers afraid of what war will do to love, like the one in “Galveston.”

Forever tied to the great Jimmy Webb’s songs, it was Glen who orchestrated and interpreted them, and he who seemed to know that Americans could appreciate the poignant longings of the people that they passed all the time on the street—people no one noticed much—people whom they likely were themselves.

Take a guy standing on a pair of crampons against a telephone pole in the middle of a western plain. Although Jimmy Webb wrote the beauty of “Wichita Lineman,” verse-by-verse it was Campbell who first valued that beauty and brought it to all of us. I think that was because he was a sharecropper’s son from Arkansas, one of twelve children, and knew intuitively that such people can think the thoughts of great kings and have the hearts of mournful lovers.

This came through in his voice, in the gentle phrasings that lay words upon notes as softly as poems upon pillows. He never seemed to bring too much to a song; only enough to pluck at the heart and leave it sore.

I hear you singing through the wire,

I can hear you through the whine.

According to Jimmy Webb, the masterful orchestration of that song was all Campbell. He reinforced the lyrics’ theme with the orchestral opening that later allowed for the bass guitar in the bridge and the pulsing piano and strings at the end, both of which provide the eerie effect of a man’s message singing lonesomely down a telephone wire in search of the love that might save him; as you listen, you learn that the middle of nowhere can be the soul of everywhere.

And I need you more than want you.

And I want you for all time.

And the Wichita Lineman

is still on the line…

In truth, the song never really ends; Campbell tapped its code out into eternity, through the universe of desire that is bigger even than the song of time.

While he kept on singing past his heyday—“Rhinestone Cowboy” and “Southern Nights” (and also appeared in one of my favorite films—True Grit), everyone knows that he lost his way in cocaine and women, and then nearly killed himself with both. That he found a path out of all that, became a devout Christian again, and had a good, if blessedly less eventful, life afterwards is less known.

His wastrel years are the ones people remember best. It’s a strange and perverse attachment we have to the self-destruction of entertainers, one that they play into all too often. We don’t ever seem to believe in their recoveries either. It is said that only the sins of the great are glaring; that seems far too true.

But I would never give up on Glen, no matter what he did, and no matter who or what I’d become myself. My tastes and styles have changed over time, but because he gave all to the songs he sang, and to the everyday troubadours that he gave a voice, I stay faithful. His people aren’t the noble savages or the happy reapers in the fields of a Romantic period, but the men and women nobody notices, but to whom a cotton picker’s son gave great life in his music.

Glen Campbell died of Alzheimer’s disease, and like all who suffer their end in that way, could not string his thoughts together at the last.

No matter. That changes nothing. He had the voice of the eternal call, one you could hear singing through the whine. As for me, I will listen and love it back—now, always, and forever on the line.

Above image used with permission under a Creative Commons License.