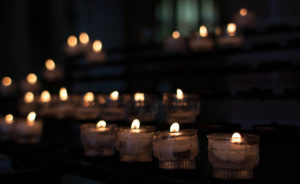 My priest has died.

Or rather, in Eastern Orthodox terminology, he has reposed. He has fallen asleep.

It’s funny how this death both echoes, and completes, the death of my biological father forty years ago. Throughout my childhood, for years after my father died, nothing irked me like people’s vague references to somebody “passing away.”

They died, I wanted to complain, as hard-nosed as a nineteenth century freethinker. Just say the word. I wasn’t a Christian then, aside from the cultural inculcation I received as a Southerner. I felt steely and righteous. I did not yet believe.

I’m now a Christian, of course. In the jaded city where I live, you could even say that I am still a Christian—which in some of my circles is rather remarkable.

What can I say? I like living in the mission field. But as my priest, Father George, always made clear, evangelizing one’s own heart—again and again—is the place to start, before trying to convince anyone else.

Whenever I went to confession with Father George (I guess it’s OK to reveal this, no? since I was the one confessing?), the first thing he would ask is, “Have you taken the Lord’s name in vain?” What mostly gets taken as a minor oath these days—Goddamnit; Jesus H. Christ—by even believers was the entry point, to him, of not taking one’s faith seriously, of betraying Jesus the same way the Apostle Peter did.

This was where Father George began when he heard a confession, because, I perceived from him, taking the Lord’s name in vain was the little tic of unbelief from which all the other manifestations of lost faith proceeded.

Not that he ever told me that, in so many words. He was the consummate exhorter, but he did not indulge himself in any kind of grandiose theological explication: To him, living the Christian life was pretty much a subject/verb/object proposition: Act like you believe. Pray if you don’t. Life is hard. Don’t sin.

He was not like the other clergy I’d known over my lifetime: He had neither the self-effacing, vaguely apologetic tone I’d seen in liberal mainline clergy, the middle-manager glad-handing of most Catholic priests, or the hard-ass football-coach pose I’d seen in all kinds of conservatives.

Rather, he often talked like the high school teacher he had been before entering the priesthood (and sometimes after), as though we were his charges, and it was on him to ensure we learned what we were supposed to. We needed to listen up, because there was going to be a test.

But like such a teacher, he made the community of his classroom real. In the Temple when he served, those of us in the pews were not merely “the faithful.” Fr. George made it absolutely clear that together, along with all the departed saints and angels, we were the timeless body of Christ. And he was not being remotely symbolic or metaphorical about it: This was the real stuff. His life and ours depended on it.

Which is why actually going to church, he exhorted us, was critical. Being a Christian was a fundamentally communal task. However much one might pray alone, the only real way to be a Christian was to practice together.

He took the stance of a father in a way that was both reflective of the best kind of earthly father, and the heavenly Father above. I received Communion from the golden spoon in his hand countless times, and even after he retired and sat wearily at the back of the church while his successor performed the liturgy, I’d reach out as I walked past and bend over to kiss the back of his wrinkled hand—the hand that had carried my daughter to the altar forty days after she was born.

It’s hard to talk about the dance of tradition, of honor, in an American culture that, these days, can only see priestly authority as a symbol of abuse or hypocrisy.

Father George never took that authority lightly, or for granted: In a church with an (unapologetically) all-male priesthood. On his office door were photographs of him out fishing on the Chesapeake Bay with his buddies, the men of the parish. Yet, he was ever earnest in depending on female attorneys, stay-at-home-mothers, Sitti, lobbyists, and others to help steer his congregation.

It was clear he was ill when he finally retired in 2016, and his successor, the wonderful Father Isaac, took over. Fr. George had grown thin and gaunt, his booming voice softened. He’d come to the Divine Liturgy and creep across the floor, the hem of his black cassock swaying across the carpet.

Last spring at Pascha, early in the morning after the conclusion of the Resurrection Liturgy, he motioned that he wanted to say a few words. Wearing a white cassock and visibly frail, he crept to the microphone and pulled it down toward his face. Exhausted from hours of standing, I remember almost nothing of what he said, only these two sentences:

Beloved, we are such fragile creatures. Go and be kind, and do good.

Go and be kind, and do good.

May his memory be eternal.