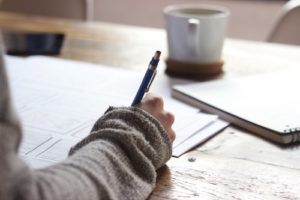 In the first days of my MFA program, one of the mentors—a fiction writer I hadn’t studied with yet—said she’d taken to sending letters to other writers when she found herself feeling jealous of their success. This struck me as worthwhile, both in terms of maintaining literary friendships and, you know, being a decent human being. I decided I would take this on if I ever felt jealous of another writer.

In all honesty, reaching out with a sincere congratulation was an easy task. I know plenty of writers and it takes very little effort to celebrate the joys of a profession that, let’s face it, is mostly filled with terrible news, worse reviews and—if you’re really lucky and manage to keep a disciplined writing habit—the sort of inspired obesity that few other careers can promise.

So, I sent notes to my publishing friends.

Congratulations on placing that poem. This is your best story yet. In fact, yes, that editor is crazy for not buying your book.

All in the name of literary citizenship.

I admit: I was feeling pretty good about my lack of jealousy. Especially as my community’s list of successes and accomplishments grew. But self-congratulation is the oldest trick in the book. As soon as you realize how humble you are, the rug gets pulled and you’re suddenly wallowing in a puddle of unexpected pride.

As somebody who is paid to think about the Bible and how it is applied in the life of the church, I’ve spent the last year wondering if the Christian message has also had the rug pulled on itself.

There are a few verses or ideas that transcend the walls of the church. Things that even the most adamant atheist wouldn’t have trouble acknowledging as a positive part of the social fabric: Love thy neighbor, forgive your brother seventy-seven times—you know the ones.

But as parts of the church have recently chosen nationalism over taking care of the “least of these” the ability to speak to these universal qualities—especially with those who do not hold any sort of nostalgic connection to the church—is disappearing.

This became starker as I worked on a recent project about prayer, specifically the verse in which Jesus tells us to pray for our enemies. I’m not dropping a theological bombshell by saying that the idea of praying for our enemies is a radical notion. But is it a message that transcends? Is it how we’re known?

It doesn’t help that “enemy” has become such a charged word, reserved for foreign policy and the hyperbole of our political process. In our day-to-day we might use stand-ins like opponent, adversary; a terse, “Oh great it’s…her.” But rarely does somebody eat the last donut in the office and get branded as an enemy.

As a result, we’ve truncated and defanged the verse’s meaning. We’ve made it rote, something that no longer challenges us—no longer convicts us. Instead, it becomes another pebble on top of a mountain of vaguely held beliefs. Something that looks nice printed in our worship bulletins. A clarion call that is rationalized away.

I found myself doing it as I texted a friend, complaining about another writer. This, naturally, was right in the middle of my letter writing campaign.

To my credit, this particular writer has the sort of social media presence that would make the Kardashians draw back in horror. Everything this author says, does, and posts runs counter to not only my personality, but how I view the calling of a writer. The writer has also had massive success, which I’m sure has nothing to do with my preoccupation. At all.

If I’m being completely honest (note: I do not want to be completely honest), this writer has never done anything to me. In fact, our limited personal and online interactions have always been fairly pleasant.

This person is in no way my enemy.

But parsing words is too often a trick in making God in our own image and my constant text messages to friends, my kneejerk eye roll at everything this writer puts on social media, was a reminder of how quickly we can tame the wildness of the Gospel. And that taming comes with a price. It leaves us with a cheap sense of entitlement, something that will always feel like a piece of clothing that is shrinking and shrinking and shrinking around our necks.

In my experience, the Bible is much more enjoyable and way less threatening to the status quo when it can be discussed outside of personal experience. When it is treated as an academic exercise, rather than a catalyst for transformation. When you don’t have to acknowledge that a writer’s six-figure movie deal, near-constant commercial and critical praise, isn’t a speck he’s ignoring, but instead is a big, honking log you’ve conveniently overlooked.

I hesitate to go full-on Hallmark here and end with something like, “Prayer changes the thing we least expect—us.” But the instinct is probably true. The act of praying for our enemies isn’t an act of changing behavior. Instead, it requires us to see ourselves more clearly. To put our biases and grudges and pettiness at the feet of God.

It’s a reminder that the people we’ve hurt and wronged are praying for us, too. It asks us again and again to be better than we probably want to be.