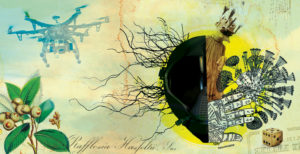 “Something Just Like This” was one of the biggest hits of 2017. It reached number three on Billboard’s top 100. It was nominated for a Grammy in the Best Pop Duo/Group Performance category. The single has sold millions all over the world.

“Something Just Like This” is a collaboration between Coldplay and the more recent EDM (Electronic Dance Music) duo The Chainsmokers. It was written collaboratively at a recording session. Five members of both bands are credited as songwriters. The opening lyric of the song goes as follows:

You’ll notice, perhaps, that we shift rather abruptly from the classical heroes Achilles and Hercules, to the figures of Spiderman and Batman. It is surely foolish to quibble with pop songs, but I’m not sure if Spidey and the Dark Knight can really be said to have sprung from “books of old.” Batman first appeared in print in 1939, Spiderman in 1962.

Alex Tall and Andrew Taggart of The Chainsmokers were both born in the 1980s. In our current era of temporal acceleration, it may be the case that the ’60s seem like olden times to Alex and Andrew and that the ’30s may as well be ancient history.

The members of Coldplay, however, were all born in the 1970s. Mightn’t this extra decade of life on earth have given them a richer sense of history’s long sweep?

Spiderman and Superman aside, we should probably be grateful that the members of two popular musical outfits would have Achilles and Hercules on the mind at all, let alone include them in lyrics to a pop song. Is it going absolutely too far, then, to be bothered by the fact that Achilles is associated with “gold” and Hercules with “gifts”? Couldn’t we have had “glory” and “labors,” respectively, instead?

To be fair, Achilles, as a sort of Greek king, or tribal leader at least, was surely in possession of a fair amount of gold. His shield, described lovingly, painstakingly, even tediously by Homer through more than a hundred lines in Book XVIII of the Iliad, is wrought partially in gold. Agamemnon dangles various piles of riches before Achilles in attempting to bribe him back into the fight against Troy.

So, I suppose it is not impossible to associate Achilles with gold. Not being a complete and total pedant, I also realize that the writers of “Something Just Like This” had bigger worries on their minds than textual fidelity to the Iliad. There was, for instance, a rhyme scheme to consider. “Old” has to rhyme with something. “Gold” does the trick.

But why not go for something in an off-rhyme? Why not, “I’ve been reading books of old / the legends and the myths / Achilles and his wrath /Hercules and his gifts”? “Achilles and his wrath” has a nice sound to it, I think. It links us up directly with those spine-chilling lines from the opening of The Iliad where Homer invokes the Muse and begs her to help him tell of the menis—the anger or wrath—of Achilles.

Come to think of it, the lead vocalist of Coldplay, Chris Martin, might, with his British pronunciation, have enunciated “wrath” into something more like “wroth,” which is a beautifully archaic form of “wrath” and which would have made an even more pleasing off-rhyme with “old.” And why couldn’t we have expected as much from Mr. Martin, both in terms of euphony and classical scholarship? It is in fact the case that Martin “read” (as the Brits say) Ancient World Studies at University College London where he graduated with first-class honors in Greek and Latin.

This is a man who most certainly came across the ancient Greek word menis once or twice before completing his studies. He would probably have learned, in his studies of the classics, that the wrath of Achilles has great significance. Achilles, born of the immortal Thetis and the mortal Peleus, is a man almost literally bifurcated (fully human, fully divine, anyone?). A mortal on one hand, he is also teased, frustrated and tantalized by the essentially superhuman powers that make him the greatest of fighters.

Achilles seeks to go beyond himself, and it is that very seeking which causes so much chaos amongst the Achaeans and the Trojans. Eventually, it leads to his own doom. Later, in the Odyssey, visited by Odysseus in the underworld, Achilles will say (in a speech not lost on John Milton) that he’d rather have been a simple farmer on earth than an immortal hero ruling in Hades for eternity. He learns the hard way the beauty of mortality’s bounded quality.

Achilles is, thus, a kind of living embodiment of our difficulties accepting the limitations of finite human life, and our desire to outstrip such limitations. Achilles has that problem in his very bones, as it were. A god stirs in him, but only enough to drive him mad.

Which is, actually, the theme of the song that Chris Martin of Coldplay helped to write. The later lyrics of “Something Just Like This,” which is structured as an internal dialogue between the singer and an unnamed she are the following:

But she said, where’d you wanna go?

How much you wanna risk?

I’m not looking for somebody

With some superhuman gifts

She’s looking for a normal human being. Someone she can “kiss.” Someone tangible. Someone mortal, human, incarnate, fallible, fleshy.

The singer of the song is having rather more trouble accepting the idea that he’s not to be counted among the heroes. It ought to be noted that the singers of “Something Just Like This” are, themselves, not exactly normal, everyday people. They are pop stars. They’ve written a song that transcends them, that will exist in human memory, like Achilles’s glory (sort of). The song will stick around for awhile even if, God forbid, the pop stars should all perish in a plane crash tomorrow.

And yet the song makes the case for humility. Something “just like this” is something fundamentally sublunary, alluvial, downright telluric. Those words don’t come up in the lyrics written by Coldplay and The Chainsmokers. The writers opt instead less for words and more for a crunchy electro-beat that kicks in with the chorus and its string of doo-doo-doos. But it is, after all, a pretty good beat, a beat that might even have pleased Achilles, sitting round the fire with his friend Patroclus, in the mythical days of old.