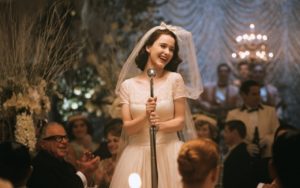 My annual family Christmas letter swelled from a single paragraph into a sixteen-page spread before I finally admitted at age thirty-seven—to myself, more than anyone else—that I wanted to be a writer, a desire that’d been brewing during a decade as a fulltime wife, mother, and dedicated church volunteer.

I hadn’t always wanted to write. As a teen in the seventies I wanted to be a senator, so I majored in political science and went to work in local government, quitting when my oldest daughter was born.

I didn’t set out to deny my ambitions, but growing up through multiple divorces, holding my nuclear family together was paramount. So I drafted committee minutes, took family field trips, and planned Sunday school lessons, sublimating my creativity rather than risk the disruption “being a writer” would cause my family.

So when Amazon’s award-winning comedy series The Marvelous Mrs. Maisel opens with newlywed Miriam “Midge”—played by Golden Globe and Critics Choice winner Rachel Brosnahan—standing alone in the middle of a reception hall asking, “Who gives a toast at her own wedding?” and launching into a monologue, I saw a reflection of myself in her at that age: poised to take on the world and capable of success in any endeavor she chooses.

Fast-forward four years later, to 1958, and I find that Miriam, like me, has completely immersed herself in the traditional roles of wife, mother, and church (synagogue) member. She appears successful and happy, a state reinforced by the colorful costumes, cheerful sets, upbeat period music, and sparkling dialogue— no surprise coming from Amy Sherman-Palladino of The Gilmore Girls, a hallmark of rapid-fire repartee.

Soon the action moves to The Gaslight, a nightclub where husband Joel (Michael Zegen) can’t get onstage without Midge bribing the manager for a timeslot with her homemade brisket. She keeps track of Joel’s laughs and joke ideas (her ideas really). When his set bombs and she tries to cheer him up saying comedy should be fun, like ballroom dancing, he reveals his comedic career aspirations and unhappiness with their life.

He is leaving. There is no discussion, no opportunity to work things out, just a pronouncement out of the blue. It happened the same way to my mother, twice. But The Marvelous Mrs. Maisel departs from stereotypes here. Midge doesn’t cry, scream, take the blame, or beg her husband to stay. She is calm, reasonable, and even manages a few ironic observations: He’s going to leave her with her suitcase? And, he’s leaving the night before Yom Kippur when their rabbi is coming to dinner? His timing is terrible…onstage and off.

Midge, like my mother and me, learns painfully that you can follow “the rules,” do everything right, and life can still fall apart.  She jokes that now she’ll get the worst cuts of meat at the butcher—but she’s not a victim left unmoored like so many women—including my mother, who didn’t know how to drive or write a check.

Though she majored in Russian Literature, Midge is not primed for suffering. She’s not hibernating under a blanket. She doesn’t need therapy or Valium.

The night Joel leaves, Midge gets drunk and wanders onstage at The Gaslight. Her resulting impromptu foray is uproarious. The woman who worked her own reception with acerbic wit, has finally reappeared, and it’s clear she’s experiencing the state of consciousness, we now call flow, where, as Scott Berry Kaufman writes: “…the creator and the universe become one, outside distractions recede from consciousness and one’s mind is fully open and attuned to the act of creating. There is very little self-awareness or critical self-judgment; just intrinsic joy for the task.”

In responding to disaster by telling her truth, Midge is reconnected with her creative genius. Though afterward she’s loath to think of herself as a comic, and worried that it’s not an appropriate pursuit, her onstage awakening is the catalyst for the show.

The journey of self-discovery Midge undertakes is one familiar to me, and many women, one where the wrestling occurs within the familiar terrain of home and family, where responsibilities and belonging are not abandoned in pure pursuit of our dreams, but are absorbed into an expanding identity. And each of the eight episodes in the short season of The Marvelous Mrs. Maisel examines the tension and increasing complexity in Miriam’s life as Jew, wife (or not), mother, daughter, sister, friend, working-woman, and comedian.

As created beings, we are called to create—even if the call leads to something seemingly frivolous like standup comedy routines, or writing an essay about a T.V. show.

Faithfully answering the call upon our lives can bring joy and fulfillment, but it’s also bound to involve doubt (Am I being selfish? Will my family approve? What if I’m no good?), disappointment when our skills don’t match up to our imaginations, and discouragement when our efforts fail. And all that makes for interesting viewing.

Is there room in Midge’s life for all she desires? Will her identity one day encompass all her God-given gifts and talents and their expression in the world? As someone who has been writing for twenty years now, I hope the answer is yes.

The Marvelous Mrs. Maisel returns for Season 2 this spring.