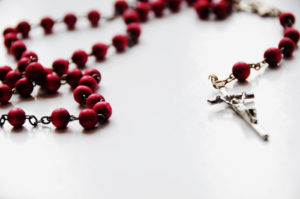 They say the flu circulating this season begins with the sensation of having swallowed a tiny sword. For the relief of such ailments, some Catholics seek the Blessing of the Throats in February on the Feast of St. Blaise, patron saint of sufferers of throat diseases.

The narrator of  Matthew Thorburn’s “Relic” describes his schoolboy experience of this ritual as “weird magic,” “ a spell to believe/in” – as much a relic in his present life as an old coat he can’t part with, the reliquary the boy spoils at the poem’s conclusion, and the sort of belief that “blew away” with the exposed specks of bone.

The narrator’s story of lost faith is not entirely convincing, however. Given the potency of the poem’s language, the reader cannot quite believe “the lost voice” is incurable. Unlike the debunked magic of the spoiled reliquary – magic that disappeared with the scattered flecks of bone – the old coat of belief, though unbuttoned, still keeps its place in the narrator’s closet.

Weird magic, it seems now, a spell to believe
in the candles crossed like swords
across your neck for the feast of Saint Blaise—

God preserve you, the priest intoned again
and again. We stood in line,
the whole school, as the white tapers

were pressed against each neck to ward off
sore throats, a lost voice, something
worse. Now, that life’s like an old black coat

I’ve unbuttoned and hung in the closet
and won’t ever wear again, though
I can’t quite give it away. I can still feel

my way back to the guilty thrill as I fingered
the crucifix on that worn rosary,
the thick cross with a little door on the back

closed tight with an even littler screw.
It held a relic, someone said—I remember that
hushed voice—a few specks of bone

from some forgotten saint’s shoulder or ankle,
something I had to see, those gray flecks
smaller than rice grains I stared at

in queasy wonder, tilting the cross
so they’d catch the light—a little, a little
more—until they slipped out and blew away.

Matthew Thorburn is the author of six collections of poetry, including the long poem Dear Almost(LSU) and the chapbook A Green River in Spring (Autumn House). He lives in New York City.