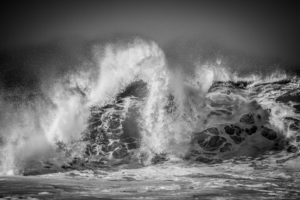 Leaving work the other evening—a cold, blustery twilight that belied the spring it’s supposed to be—I drove down D.C.’s North Capitol Street and passed the usual crowds that give the neighborhood its shady reputation. Things are “trending” in these parts—new restaurants have arrived and townhouses are being renovated—but you still have a lot of people begging, a lot of furtive exchanges going on, and a lot of businesses that separate the customers from the owners with a thick wall of clear, bullet-proof Plexiglas.

“It’s better here than it was,” people say. But just yesterday a nun in full habit was carjacked at gunpoint not far from where I teach, and it’s still not irregular to exchange glances with a kid sitting on the curb with his hands manacled behind his back, illuminated by the spin of blue police car lights.

For good or bad, I am somewhat inured to all this after so many years. I lock my doors, drive on through, and get to the interstate with reasonable diligence, so that I can zip beneath the city via tunnels and then over the Fourteenth Street Bridge to suburban Virginia.

But I was caught at a stoplight the other evening, tired from work and tired of the music on the stereo. Nothing looked right. There I sat, surrounded by the same old bedraggled people, beside the same old ratty convenience store pouring its same old sickly light onto the same potholed street. It all appeared hopeless.

Then a stanza from a hymn popped into my head:

Could we with ink the ocean fill,
and were the skies of parchment made;
Were every stalk on earth a quill,
And every man a scribe by trade:
To write the love of God above
Would drain the ocean dry,
Nor could the scroll contain the whole
Though stretched from sky to sky.

I have no idea why it came to me as it did; I don’t think I’ve thought of it in as many years as I’ve lived here. In fact, at that moment, all I remembered was the first four lines. I’d certainly never heard the tune to which the lines were set. Instead, my association with these words and their images have come to me secondhand.

Back home, long ago, my older brother took it upon himself to visit residents in a nursing home while in college at Ole Miss. He’s the kind of person to volunteer like that out of his own goodness; I’m the kind of person to copy others’ goodness, but I suppose that’s pretty common. At any rate, one of the men he got to know was a retired Baptist preacher whose health had failed him. In their conversations, the man would relate the lines of a hymn that proved so powerful in its imagery and prosody that my brother took it up whole, as one inhales a mist.

I remember him relating it, mimicking the old man’s cadence (just as I would later mimic his own charity with an occasional nursing home visit), and all that heard it were delighted. English speakers are highly susceptible to the iamb, into which the language naturally falls, so the lines suffused themselves within my memory’s choir. From time to time, I would recite the part that I recalled—the first four lines, beginning with, “Could we with ink the ocean fill…”

So the other night I was thankful when they came to me, and decided then and there—before the stoplight changed—to quote what I remembered into “Siri” to learn more. What I found was a story known to many, if not to me.

The hymn that contains the lines is called “The Love of God” and was written by F. M. Lehmen in 1917. Lehmen was both a minister and a writer of sacred songs. But he only wrote the music and the stanzas surrounding the one with which I was familiar. The most famous lines, the ones I knew, had a more dramatic past.

According to his own story, Lehman once heard an evangelist speak of how the verses had been discovered scratched into the walls of a mental asylum, written there during one of a patient’s more lucid moments. They were found after the man had died and his cell was emptied. Lehman, with the aid of his daughter, took the lines and wrote what I’ve now learned is a classic among old time hymns.

Still, the most amazing part of the story related to the stanza that everyone loves—the third— “Could we with ink the ocean fill…”—is that it’s a paraphrase of Jewish poetry written in 1050 A.D. by Meir Ben Isaac Nehorai. It is in fact part of the readings during The Feast of Weeks, a celebration commemorating God’s gift of the Torah to his people on Mount Sinai.

So a set of poetic images, of ancient origin, well known to others, found their way down the ages and into the heart of a preacher, who became old and recited them to my brother in an Oxford, Mississippi nursing home. And on they cascaded to reappear here, nearly a thousand years later, in my mind, on that chancy street, in ostensible disconcert to all that I felt and saw.

Was it being surrounded by the apparent lack of what the song implies that brought it back to me? Its imagery is of a sublime enormity beyond the sky’s reaches, so vast that it can redeem even a scene so tired, dirty, and enervated as the one that I beheld. So did it present itself in defiance of all outward confusion, as it had to the Jewish poet, the man sick of mind, the Gentile songwriter?

What I can say with assurance is that now, despite the look of the night, or the level of misery I see, that place will at times be imbued with the soaring notes and rolling lilt of an old poetry, one too sweetly lovely for any weather of despair to belie.