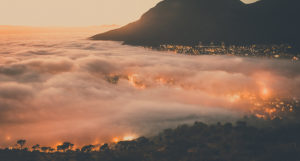 When Hulk stops in Africa for a drink of water, he happens to be within Wakanda’s borders, and soon a small fleet of highly advanced aircraft are dropping their payload on him—and trying not to get their wings ripped off.

Amidst all the explosions, a scrawny young woman on a motorcycle rides up and sweet-talks him down in about half a minute.

Hulk actually knew her from back in New York, where a similar scene played out. I guess writer Christopher Priest couldn’t resist another episode in this Beauty and the Beast side-story to his elaborate Black Panther arc.

Hulk, the irradiated alter ego of mild-mannered gamma-ray scientist Bruce Banner, began as a nuclear age monster before morphing into a Jekyll and Hyde character and then into a misunderstood giant.

Picture the big green guy on hands and knees, drinking from a river, on his way to the savannah, perhaps, to roughhouse with a rhino. Then boom, a bomb explodes on his back. So that’s how today’s going to go.

Not so different than any other day, really.

It’s not always clear if Hulk is a good guy or bad guy. He often fights for the good guys, but sometimes he loses it and just starts breaking things. Then the good guys need to fight him.

In other words, he’s always a hair’s breadth away from being on the outs with his friends.

The difference between Hulk and most of us is that he knows exactly why his friends might not want to invite him to the party. We only have our suspicions and insecurities. We don’t know what monster lurks within us. What makes us unlovable.

Enter “Queen Divine Justice,” an intelligent, impetuous African-American teenager who was recently informed her parents were Wakandan tribal nobles. In addition, she has been chosen to join the ranks of the Dora Milaje, King T’Challa’s personal guard of elite-trained female fighters—from whom he is expected to choose his queen.

Not surprisingly, a young black activist from New York has a different way of doing royalty than the Wakandans are used to. The king is patient and gracious, however, and Queen proves to be made of capable stuff.

The confrontation between Queen and Hulk becomes a sweet but profound story of friendship and love.

Queen later explains to a monk why she could calm down Hulk when the bullets and bombs couldn’t: “Under all that rage, even a fool could see that he was hurting. That somewhere under all that muscle was a big, scared kid who wanted to be loved, and who would respond to love.”

People should know by now they’re not going to defeat Hulk by show of force. It’s only Queen’s empathy and love for him that can soften him—enough so that he stops ripping the legs off of panther-bots and joins her in the kitchen to make grits.

It’s an unusual moment in a superhero comic. They usually rely on grand, violent confrontations. Sure, those confrontations are themselves often metaphors for larger moral and spiritual conflicts, but we’re used to seeing them worked out through struggling to overcome the opposition. It’s rare to see someone kneel before the violent force.

But the wisdom of the fable is that openness is just what we need when we’re hulking out. That surge of power, based in fear and anger, seeks to work itself out on whatever is nearest to hand. Resistance only feeds it, deliciously even. It’s uncontrollable, unpredictable. Paradoxically, the real power is in the soft touch, the open arms, the assurance that we are lovable despite the ways the world thwarts us.

It’s the same kind of thing our therapist tells us to do. When your partner is hulking out, lean in, embrace her. Tame the beast.

Hulk (2000) is not, to my knowledge, attempting to work out any Christian theology; it just happens to briefly abut it. Queen even suggests, for example, that Hulk loved her, “perhaps for no other reason than that I showed him love,” echoing 1 John 4.

When Rachel said something like this about why she loved Ross (yes, it’s a Friends reference), I scoffed. Thinking of it from the guy’s point of view, I wanted her to love him for some intrinsic quality in him (even if I didn’t see it). I didn’t appreciate the upside-down logic of love. Sometimes it takes love to awaken love. To see the other look at us with adoration, appreciation. Some part of love is also gratitude.

What makes this particular Hulk fable interesting is that Priest doesn’t stop at “love conquers all.” He’s interested in the nature of Queen’s love for Hulk. It turns out her compassion only went so far. It wasn’t, for example, accompanied by true respect.

Hulk finds this out, and he reveals that he’s not as dumb as he looks. Their relationship will never be the same—if it’s recuperable at all.

Which is sad, frankly, because good relationships can be hard to come by these days. But what kind of relationship had it been, anyway?

The episode works like the Parable of the Prodigal Son. We assume we should read it one way—as a story of love conquering a monster. But then we’re shown another way to read it: real love respects the dignity of the other.

Ultimately, Hulk does the right thing. When Queen gets in trouble, he helps her out, even though he has learned how she’s been deceiving him. If there’s a moral to this story, it may be that. We can’t control how people treat us, but we can control how we treat them.

Most of Priest’s Black Panther story presents T’Challa as something between Batman and Aquaman. A powerful, mysterious monarch who’s always several steps ahead of his enemies. Hulk and Queen’s story imagines, just for a moment, how we less powerful and intelligent types might make our way when we’re sometimes clearly the monster—and sometimes a less obvious monster.