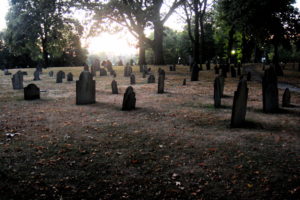 And should you glimpse my wandering form out on the borderline
Between death and resurrection and the council of the pines
Do not worry for my comfort, do not sorrow for me so
All your diamond tears will rise up and adorn the sky beside me when I go
—“When I go,” lyrics by Dave Carter

I capture the white eye of the lowering sun, the branches sticking out like craggy lashes, blinking as I move between the cemetery trees. It’s nearly the perfect light for a photograph, shadows and beams making the material world so clear they are like fairy light on summer solstice. It’s that almost complete moment just before day becomes night, when we are childlike again, and see that imaginary things exist.

Maybe it isn’t really the material world I see more clearly in those moments. Maybe what I’m seeing is the veil between worlds becoming dust or a ray of sunlight to be brushed away by a gentle wave of the hand; the heavenly and earthly interwoven in a fiery embrace of consummation.

Growing up, I didn’t understand Christians who coveted heaven and the forever-long worship service at the foot of the throne, that vision of paradise that we were taught to expect from the book of Revelation. Dutiful kids everywhere, filling out their sermon bulletin outlines during church in order to stave off boredom, secretly wondered why that sounded like paradise. But they never wanted to ask for fear of seeming ungrateful. Death and forever were mind-boggling scenarios that created spiritual crises, even in the young.

I grew up with an extra dose of terror at the imminent prospect of death. When I honed in on that terror as a young adult, swimming downward to grasp at its very deep source, plucking that dark heart and pulling it out, bloody roots and all—I looked at it and turned it over to discover what was there: the fear of not existing, of my consciousness meeting its end, of being completely over.

Not a stellar admission for someone who grew up in a Christian home. How could a Christian kid be afraid that all of this was bunk, that in the end, we were all just dead?

Maybe the abject terror of death comes from someone who hasn’t confronted her own suffering.

Life was pretty easy for me until it wasn’t. I think the first moment that I longed for death began to change me. It happened in a period of deep emotional pain and for a time, I wished it were all over, that I could have relief from the pain. Whereas before, I had bathed in the sweet melancholy fear of death, it had suddenly lost its sheen. Fear became boring.

Now, I find cemeteries to be extremely peaceful and I wander through one of them on my daily walks.

I like these lines in a song written by Dave Carter, sung with gravelly and angelic perfection by Willie Nelson and Judy Collins. The song “When I Go” embraces poetic imagery from many mythologies and religions, Native American motifs, and Buddhist ideas. The singer speaks to his/her loved ones, telling them to listen for her to “rattle like dry leaves,” when she dies. Watch for me on the hilltop, he sings, for I will “run like the grey wolf when I go.”

I like these images, even if they don’t sound very orthodox.

Some Christians like to think they know what happens right when we die: that our souls go up to this heavenly golden place to be with God. And maybe that is what happens. Maybe we go to a paradise garden straight away or find ourselves feasting at an all-you-can-eat buffet without the consequence of calories in a “choose your own adventure” version of heaven. It could be that we will “leap like coyote” or “camp on the night breeze” in the moment of death. Or maybe, as the apostle Paul seems to suggest, we just sleep until resurrection.

But even if we take our cues from the Bible about what happens at the moment of death, the truth is that only resurrection is clearly marked in Scripture.

I sense both of these things when I’m in this cemetery: the nonsense of souls haunting a graveyard and the deep truth of bodies and souls alive in some place unmarked by time. Though I’m not stupid enough to go in after dark, I’m not afraid of what is underneath the ground. But still, I encounter God in the full solitude of buried bones waiting for reanimation.

Perhaps it is both of these things simultaneously: that there is nothing alive underneath the soil and that someday they will be alive again.

It doesn’t bother me so much what happens “between death and resurrection and the council of the pines,” as the song says. Although, at this point, I wouldn’t mind a good long nap to get ready to have my body resurrected into something that can walk through walls or maybe fly, if I had my druthers.

But after that resurrection, what will heaven be? I hope it’s less about the worship services of my childhood understandings and more like the clarifying of the new earth seen in the fairy light. That instant when we see the truth of the myth and that the longing for magic has really been a grasp at the heavenly all along.