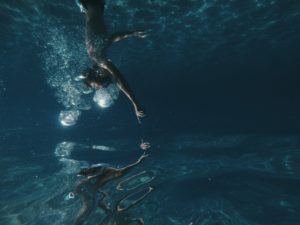 Jaws is released the summer I turn fourteen, and my friends and I spend every afternoon bodysurfing and reenacting the young woman’s death scene at the beginning of the movie.

We yell, kick, jerk, wave, scream, pretending a great white has hold, dragging us down for the kill. We sputter, shriek, and wait for a lifeguard—glistening and tan—to come running with a lifebuoy as he leaps the surf to save us.

But rescue never comes. No one is fooled by our theatrics.

We stand at the edge of the continent, the Pacific licking our legs, and wade back in, riding waves and faking our deaths.

The summer ends and I watch Jaws a second time. Because I know what’s coming I slump low in my seat, fearful, clutching the armrest.

In a week I will move with my mother and stepfather five hundred miles north and inland to a town I have never seen, leaving behind my father, stepmother, sister, and everything and everyone I’ve ever known.

In the surf the day after seeing Jaws again, my best friend grabs my legs, yanking me under. I thrash against her.

This time it isn’t funny.

I think how most attacks happen in three feet of water. I’m in three feet, maybe four of water so green I can’t see through it. I can’t explain why, but if there’s a shark out here—it’s out to get me.

Kicking attracts sharks, so I keep still, floating without moving.

I know how to keep still, keep panic motionless.

What I will do next summer when I come back to Seal Beach and find my stepmother gone the day before my arrival. What I will do when my father disappears into his bedroom each night after work and drunk teenagers drive me home from beach parties.

A great white is spotted in the channel late August. My friend’s father, who is a sailor, says they swim through all the time and no one cared until Jaws.

I remember sailing on their boat to Catalina Island. I remember the skimming fins of leopard sharks in the harbor. I stood far back from shore watching them circle, my pulse racing.

It’s a clear afternoon, my last day at the beach before I move. Catalina is visible against the horizon, but no sharks. I’ve played in this water since I was six years old and have never seen a fin. But, before today, I never looked for one.

I scan the water, thinking about the movie and the sneaky great white that never shows his fin when he’s going to attack. I can’t say this day begins my vigilance, but it confirms that I must always be alert.

Be on guard to fend off attack: The man who chases me across a vacant lot near my new school, while he unbuckles his belt. My stepfather who makes advances while my mother is hospitalized, her body rejecting his child. My stepfather—the same one—who disappears like my stepmother without saying goodbye, taking with him grandparents, aunts, uncles, cousins: People who were supposed to love me.

My friends and I practice dying grandly because there are no flesh wounds in Jaws. No casts, crutches, or stumps. No walking wounded from whose suffering I might imitate survival.

Survival I will have to practice on my own.

And healing—which begins ten years after the movie, with God’s love mysteriously pouring down on me while I shower—is done in jerky bits, twenty-five years of reverse drowning, until I emerge from murky water, no longer terrified of what I can’t predict.

By summer’s end the once familiar and constant ocean feels erratic, unsafe. I ride a wave to shore and stand in the foam while the water races out past me, burying my feet in sand.

“Shark! Shark!” my friend screams, trying to lure a lifeguard.

As if a man with a whistle around his neck and a white-roped ring in his hand has it in him to truly save our lives.

This post originally appeared at Good Letters on August 7, 2012.

Good Letters Editor Cathy Warner (cathywarner.com)is a writer, editor, teacher, home renovator, and realtor living with her husband in a fixer upper on the south shore of Washington’s Hood Canal.