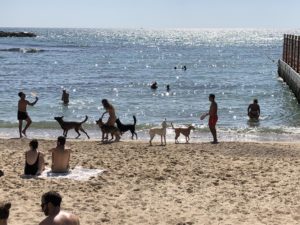 Early on Friday morning, the first full day of my recent trip to Israel with Congregation Beth Ha Tephila, Asheville, NC, six of the forty-three participants gathered on a momentarily quiet Metzitzim Beach near the Tel Aviv port for twenty minutes of mindfulness practice.

When we finished, we noted, just to the south of us, what seemed to be a privacy fence. What for? My guess: it was for ultra-Orthodox Jews to create a space where men or women could visit separately.

Turns out, I was right. Women use Nordau Separate Beach on Sunday, Tuesday, and Thursday; men on Monday, Wednesday, and Friday. That explained the dozens of men and boys in black slacks, white shirts, tzittzis (stringed fringes) swinging from their waists, tallis (prayer shawl) bags tucked under their arms, streaming toward the beach beside us.

On Shabbat (Saturday) afternoon, our dear friend and trip leader Rabbi Batsheva Meiri joined my wife and me for a stroll down Lahat Promenade. First we passed Nordau Separate Beach, which, on Shabbat, is open to all. Next, another designated beach, the Hilton Dog Beach where dogs run free.

I was delighted to watch four or five dogs engrossed in a game of kadima, paddle ball. Each time the kadima ball tocked off the paddle of the man on which their attention was trained, the dogs leapt into the air, hoping to snag the ball. That they missed every time didn’t seem to discourage them. They remained alert with hope that the next time they’d succeed. Israel is a country of hope.

Just beyond the dog beach, a third designated beach: the Hilton Gay Beach, pride flags and banners colorfully flying in the breeze.

During that short, half-mile stroll, we experienced juxtaposition and contiguity. We saw and walked among Jews whose recent-ish roots (from about 150 to sixty to thirty years ago) can be traced to Russia and Yemen, Morocco and Ukraine, Ethiopia and New York. Mixed among them, plenty of sabras, native Israeli Jews, young and old, families and individuals.

Jews of every kind gathered on these beaches to express themselves however they chose. Free of diasporic anxiety, though also, perhaps, missing out on the diasporic edge that, when not constrained by self-consciousness and neurosis, may lead to extraordinary acts of creativity in every domain: intellectual, artistic, political, social, economic.

In some ways, the self-consciousness and neurosis may even foster creativity.

Israel, of course, has its own edges, some of which are more sharply drawn, charged, dangerous, even life-threatening than those experienced by late-empire, white, Ashkenazic, American Jews. But I was feeling liberated by the energy and varieties of Jewish life concentrated in one place.

I was experiencing a sense of wholeness I don’t feel much living as a Jew in the United States. I’d spent very little time in Tel Aviv over the years, the city known as a center of secular Israeli life, a heart of Israeli culture and arts. Jerusalem was my city, yet I was feeling healed and whole in Tel Aviv.

On Thursday, within our first hour ba’aretz, in the land, we stood atop Gan HaPisga, Peak Garen, in the old city of Jaffa, the arrival point for the earliest modern Jewish immigrants to then Palestine. Looking west to the Mediterranean, we watched in awe as the sun hovered over and then dipped into the sea.

Gathered to recite the Jewish prayer shehecheyanu, we heard the nearby muezzin calling Muslims to prayer. Our rabbi, called on us to wait, listen to, and honor that call to prayer. When it concluded, we recited: “Our praise to You, Eternal our God, Sovereign of all: for giving us life, sustaining us, and enabling us to reach this season.”

On Friday evening, we joined Beit Tefilah Yisraeli for Kabbalat Shabbat service. The community of Beit Tefilah Yisraeli is creating, in their words, an “indigenous Israeli Judaism relevant to modern Israeli life….  For us, modern prayer is a tool to build community, to propel activism, to enrich individuals and to celebrate milestones.”

The service, conducted entirely in Hebrew, was spirited. Judging from the handout distributed in the service—lyrics to two songs written by contemporary Israeli songwriters Idan Raichel and Yoni Rechter—the service was also softening, if not erasing, the border between what’s regarded as sacred and mundane.

I was thrilled, if for no other reason than that Idan Raichel is one of my favorite Israeli musicians.

As the congregation sang, I was surprised to discover I could understand a fair amount of Hebrew. After all these years—it was 1979 when I was last immersed in modern, conversational Hebrew—the language still lived within me.

And then the d’var Torah, that week on Parasha Hukat, delivered in Hebrew: that, too, I followed fairly closely! The question raised by that week’s Torah reading: Why was Moses’s striking the rock (instead of talking to it) to draw forth water in the desert considered a grave enough sin to prevent him from entering the Promised Land?

Delivering the d’var Torah, Rani Jaeger, the co-founder of the congregation, connected the Torah reading to the situation Israelis find themselves in every day: when, in encountering a conflict, to speak, and when to strike out.

Language, our language. It lives in me. I live in it.

Lifney She’Yigamer, “Before It Ends,” the Idan Raichel song added to the Kabbalat Shabbat service that night, included these lines, loosely translated/paraphrased: always remember to pause for a moment / to give thanks for what is and for where you came from.

In the opening hours of my recent twelve-day trip, as a tourist/familiar stranger and as a member of the family, the tribe, I knew I had returned to the land from which I had come. And I could not cease from giving thanks as every cell of my being, every firing synapse sang, “you’re home, you’re home, welcome home.”