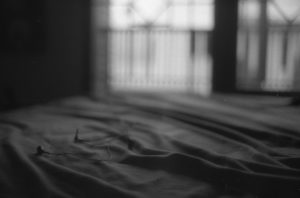 My first “Hallelujah” was sung by Rufus Wainwright in Shrek. I was a preteen and baffled that my grown siblings were interested in the soundtrack. The lyrics were deceptively simple words, referencing biblical passages I recognized.

I couldn’t understand the interplay between author and source material, couldn’t grasp that the narrator was seeing himself in holy texts, interjecting his own experience into the context of mythical figures and making them as human as he.

From there I found Jeff Buckley’s Grace in my sister’s CD collection. His “Hallelujah” was gentle and tortured. I swore off Wainwright for the painful lore of Buckley’s death.

Later, the existence of “Hallelujah” apocrypha intrigued me. Knowing about unused stanzas fed into my hipster desire to be first among the initiated. The version in Shrek is less inflammatory, less obviously blasphemous, neutralized somewhat of the agnostic undertones.

It took some time, but I eventually listened to Leonard Cohen’s original. The nuances of cover versions—the singers’ harmonies, whispers, their pauses and silences between the notes—weren’t present in Cohen’s version and I missed them. Yet despite his smoker’s growl, as the writer, he brings more to “Hallelujah” than any adaptation.

I taught high school English and wanted to shock my students a little, so I brought in “Hallelujah” knowing that it would be familiar. We went line by line, interpreting the song as a poem. It was difficult to dissect the difference between the biblical and the personal.

Understanding the narrator’s intentions and the second person was difficult. The rhyme scheme wasn’t, though, and neither was the structure, which helped guide the conversation. By the time I played them Cohen’s version at the end of class, the chorus of groans filled me with satisfaction.

“Hallelujah” is a love song, the narrator trying to woo a woman, despite knowing she is lost to him. The song’s central premise is the value, even the necessity, of praise in the face of confusion, doubt, or dread. Cohen describes different hallelujahs in his lyrics: The cold and the broken; the holy and the broken. One cannot exist with the other.

Cohen sings: “It doesn’t matter which you heard / The holy or the broken Hallelujah.” If the results are the same no matter the cause, does it matter how we got there?

Praising the divine is a mainstay of religion. I was taught in my Judaics courses that God doesn’t need our praise. Rather, we praise him for our own benefit, acknowledging that God has created all that is praiseworthy. Praising him shows devotion and recognition of his greatness, and when done in community, demonstrates affiliation to his people.

In Hebrew, the grammatical phrasing of the word “Hallelujah” is in the imperative: “Praise God!” It commands you. (To borrow briefly from Christianity, that’s why Handel’s Messiah is so effective – it feels like a command.) The word is used repeatedly in psalms dedicated in a special prayer of praise, sung on major Jewish holidays. Its connotations are very, very religious.

In the Jewish tradition, we don’t pronounce God’s name. Even writing it out here, with the O instead of a dash, feels sacrilegious. Cohen knew that—in one of the lesser known stanzas, he sings: “You say I took the name in vain / I don’t even know the name / But if I did, well really, what’s it to you?” It might be a meta-commentary on the song itself, since the last syllable of the word hallelujah is a shortening of the Tetragrammaton.

The more religious girls with whom I attended school sang “hallelukah,” neutralizing God’s name as we were taught to do. To me such pronunciation meant that though these religious singers knew Leonard Cohen was not an Orthodox Jew, they were, in a sense, accepting his secular God as our God.

When I heard a recording of a high school choir in New York combining Cohen’s chorus with a religious psalm, repeating hallelukah, bastardizing his original intention, I felt the divinity in what had once seemed nerdy.

In college my first and best encounter with The Maccabeats—an a cappella group famous for singing pop songs with rewritten lyrics about Jewish holidays— was on Shabbat. I’d left the communal meal to go to the bathroom and returned to a room gone silent. I leaned against the wall, listening to them sing a Shabbat night song in harmony.

Hearing the familiar “Hallelujah” tune combined with words I’d known since childhood reinvigorated the longing I hear in the restrained last lines of each stanza. I found such beauty in that rendition, though they removed any context Cohen had intended.

There’s irony in religious people using his song for worship. Even more ironic, though, is that like Cohen, Orthodox Judaism doesn’t care whether your praise arises from joy or despair, whether your devotion comes from love or fear. What matters is your continuing service.

These days when “Hallelujah” comes on the radio—in any of its many, many forms—I feel saturated with it. Some day that might change but for now, I feel that I’ve had my fill. And that, too, speaks to my spirituality.

Alisa Ungar-Sargon received her MFA from Northwestern University. Her work has appeared in TriQuarterly, Lilith Magazine and Alma. For more on her Jewish experiences and the storytelling aspects of pop culture, please visit www.alisaus.com or follow her at https://twitter.com/_alisaus.