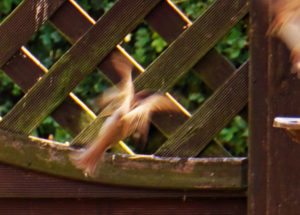 According to the Church’s liturgical calendar, this is the twenty-fourth week of Ordinary Time, the numbered weeks between the end of the Christmas season and the beginning of Lent, as well as the weeks following Pentecost Sunday until the first Sunday of Advent. Ordinary Time is the period in which the faithful live not in feasting or penance but in watchfulness and expectation. Littlepage Smith’s poem of the same name, “The Ordinary Time,” similarly advocates watchfulness (l.22), but directs our attention to creatures and phenomenon that belong to a more common definition of “the ordinary.”

The poem is structured in thirteen couplets that create a sense of an orderly and steady movement forward, much like the numbered weeks in Ordinary Time that represent the ordered life of the Church. The poet’s use of three questions (l. 11; l. 13; ll. 20-21), the repeated descriptions of the activity of barnyard creatures, and the repetition of present participles in almost every couplet (breathing, threading, singing, being, laughing, still-standing, wheedling, pleading, falling, rising) also contribute to the poem’s form and momentum. Internal rhyme and slant rhyme  (advise/rise; feel/heal; wheedling/pleading/needed; lift/whip; plumb/grunt) make the ordinary language of the poem sing, underlying the poem’s theme of finding healing and affirmation by simply being present and by attending to the actors and events of everyday life.

In these September weeks of Ordinary Time, with the slower pace of summer left behind, school and work threaten to create deadening routines of busyness that leave one feeling inadequate and overwhelmed. “The Ordinary Time” offers the reassuring image of a bird hurtling downward to what looks like imminent destruction: “It doesn’t fret about the minutiae/of rising. When needed, it rises.” Littlepage Smith’s poem, like the liturgical season from which it takes its title, invites us to redefine success and the real business of living.

Goldfish in the horse trough
nibble at morning’s surface.

They are not busy;
they are breathing.

The sparrow threading straw
under the eaves lifts whips

of time to his mate’s music.
This is the opposite of business.

Birds, even singing, can be
the architects of our silence.

Would you be healed by being?
Then be here.

Of course, that’s obvious, isn’t it?
There is no other where.

Last night, the horse laughing
in the field grunted me to still-standing.

So I stood and listened after
my friend went to bed

having asked me, without wheedling
or pleading, Can you make me feel

not like a failure? I can’t, I said.
But I can advise you to watch

the wagtail drop from this eave
like the plumb-line of rain falling.

It doesn’t fret about the minutiae
of rising. When needed, it rises.