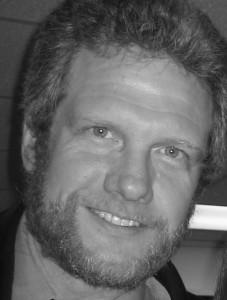 Jerry Harp is a poet of dreams, but a thoroughly grounded one. His poems invite us into surreal territory, but they do so companionably, hospitably. In Harp’s hands, dream imagery turns surprisingly solid; he defamiliarizes without self-conscious or discombobulating weirdness. The poems are rich with lines you want to reread and savor. Some moments feel stately and classical, others are almost self-deprecating. The voice is meditative, unfussy, and polished, never austere. The pacing feels gracious and unhurried; he knows he has time, and he allows readers space to develop our own thoughts. The poems are not confessional—Harp keeps himself in the background—but you get a sense of a sustained, mature spiritual life. His “Verbum Rhapsody” offers a compressed, dreamlike rendition of John’s gospel—one that allows us to see afresh just what a strange a thing the incarnation is.

Jerry Harp’s books of poems are Creature (Salt Publishing 2003), Gatherings (Ashland Poetry Press 2004), and Urban Flowers, Concrete Plains (Salt 2006). With Jan Weissmiller he co-edited A Poetry Criticism Reader (U. of Iowa Press 2006). He has also written Constant Motion: Ongian Hermeneutics and the Shifting Ground of Early Modern Understanding (Hampton Press 2010) and For Us, What Music?: The Life and Poetry of Donald Justice (U. of Iowa Press 2010). His degrees are from St. Meinrad College (BA 1983), St. Louis University (MA 1985), The University of Florida (MFA 1991), and The University of Iowa (PhD 2002). He is married to the poet Mary Szybist. They teach at Lewis & Clark College in Portland, Oregon.

The poetry manuscript I’m working on now, which is currently untitled and has been in the works for ten years or so, is haunted by the death of my father when I was thirteen, and it’s haunted by God, a search for a new conception of the divine, new ways of opening to the divine Other. It seems that I’ve been haunted by God since I was a teenager. I doubt there is any need to explain the deep connection between the death of the father and questions of God, though I think that “father” is only one among many fitting metaphors of the divine—mother, spirit, ultimate being, soul of the universe, artist of the world. Several times over these years, I’ve thought that the manuscript was finished, but then I’ve looked again and taken out half or more of the poems, revised what was left, and set out to write new pieces.

A lot of this struggle relates to staying true to the search for something new. Often enough it happens that when I sit down to work on a poem, even when I have a more or less fresh run of lines, a kind of “poem-y” voice takes over, the stereotypical sound of poems that I’ve heard many times before. I get scared by the unfamiliar and seek refuge in knowing where the poem is headed, which means it isn’t taking me anywhere. Whatever entries I can manage into the new may be nothing more than minor incursions, but these are meaningful to me.

I’ve noticed over the years that many of my better efforts begin in dreams. I’ll see a text, or in a dream I might be writing something out—on rare occasions I’ll even wake up with a line or phrase in mind. These poems still demand plenty of waking revision, but when I can write into the sense of language that the dream allows, I notice a different quality in them, something more distinctively my own. For years, given my classicist convictions, I resisted the relevance of these dream texts; but as I get more in touch again with my inner Romantic, the more these dream texts yield.

I’m trying to open to something similar in my prayer life too. Back when I was in college, my spiritual director encouraged me to take time in my prayer to listen to God, and I do believe that God is always longing to communicate intimately with each of us. But this kind of opening can be very challenging, disquieting, and disruptive even though the voice of the divine is often a still and quiet prompting. It’s not that this listening is some kind of magic. Often I think it’s merely a matter of quieting down enough to hear the promptings of my own most centered energies and intuitions; but then I also believe that that is where the divine is most intensively in touch with us. As St. Augustine said, God is closer to us than we are to ourselves.

Related to both of these pursuits, I’m beginning a work preoccupied with this kind of everyday opening to the divine, a sense of God as always present, gently and non-coercively inviting us to greater intimacy. I’ve been writing in dialogue with such figures as Karl Rahner and Julia Kristeva, Jacques Derrida and Elizabeth Johnson—as well as St. Augustine, St. Teresa of Avila, and the Book of Psalms. Some of this writing comes out in lines and some of it in prose. I’ll have to see what shape it takes as a whole.

In the meantime, I’m also working on verse translations of the Latin poems of St. Thomas More. Several years ago I translated one of these for an afterword I wrote for an edition of More’s Utopia. The translator of that edition, Clarence Miller, was very encouraging, so I’ve continued working on these verse translations, and Clarence has continued to advise me about them. This work allows me a kind of sacramental and literary community across geography (with Professor Miller) and across time (with More).