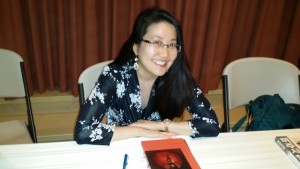 Most contemporary poetry approaches the language of the Bible obliquely or allusively, if at all. The fear, perhaps, is that the words of scripture are too familiar, that too much has been said about them already. Or perhaps they seem too foreign, too distant in time, geography, and culture, for us to engage with them honestly. No wonder poets prefer to begin with the natural world, or with the language of other poems. Karen An-hwei Lee, on the other hand, plunges bravely into the word of God. Often the voice feels straightforward at first, even plain or obvious, in the mode of sincere, intelligent university students doing a manuscript study, close reading the Bible line by line. But then comes a turn. As a poet, Lee takes the reading of scripture in unexpected directions. She plays. She finds strange echoes. She riffs. She takes us by surprise. And she constructs bridges between our world and the world of ancient Palestine. Her poems, after all, take many of their images from a desert: the apartments and bodegas, the street corners and dry cleaners of southern California. The result feels daring and provocative. Part confession, part exhortation, Lee’s work offers us new points of entry into long-loved passages of scripture, by dramatizing the dance between very old language and a very modern mind.

Karen An-hwei Lee is the author of Phyla of Joy (Tupelo 2012),  Ardor (Tupelo 2008) and In Medias Res (Sarabande 2004), winner of the Norma Farber First Book Award.  Lee also wrote two chapbooks, God’s One Hundred Promises (Swan Scythe 2002) and What the Sea Earns for a Living (Quaci Press 2014). Her book of literary criticism, Anglophone Literatures in the Asian Diaspora: Literary Transnationalism and Translingual Migrations (Cambria 2013), was selected for the Cambria Sinophone World Series. She earned an M.F.A. from Brown University and Ph.D. in English from the University of California, Berkeley. The recipient of a National Endowment for the Arts Grant, she serves as Full Professor of English and Chair at Vanguard University of Southern California in greater Los Angeles, where she is also a novice harpist. Lee is a voting member of the National Book Critics Circle.

As I mentioned in a recent interview, “A Votive Flame,” with Clare Hogan at the Poetry and Literature Center of the Library of Congress, I often use Kimberlé Crenshaw’s term “intersectionality” when social categories like race, gender, class, age, or religion aren’t neatly compartmentalized, but rather, enmeshed in hybrid complexities. My matrilineal heritage is Presbyterian while women in my godfamily are African American Pentecostals who grew up with Asian Americans and now work among Latinos.

Due to my polycentric background, I draw inspiration across social categories of race, gender, class, age, and religion.  Divine love incarnate, Jesus did not fit easily into categories when he walked on earth. To save us, he crossed social boundaries. Jesus loved fishermen, unwed women, mothers, widows, children, orphans, the illiterate, the blind, the mentally ill, the oppressed, the impoverished in spirit, and folks from all walks of life.

His journeys circumscribed a place where Europe, Asia, and Africa joined in the Middle East. Jesus was not a trained physician, and psychotherapy did not exist, yet he healed people of bodily and mental afflictions. Additionally, by healing a disabled man on the Sabbath, he resisted legalistic notions of holiness.

My recent work continues to draw inspiration from the tensions of boundary-crossing and “intersectionality,” at times explicitly spiritual, denotatively historical, or both—histories of immigration, war-torn borderlands, a pilgrimage to el santuario near Santa Fe. Other times, it is connotatively figurative in spaces of marginalization, or poetic language itself as a site of subversive play.