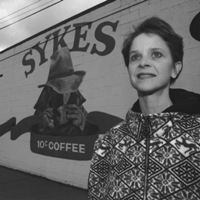 Melanie Rae Thon has an imagination that turns no one away. For over two decades now, she has published short stories and novels that take us into the worlds of people who, in the course of everyday life, we might cross the street to avoid. With great tenderness, she draws out the stories of outcasts and strangers: the addicted, the slightly mad, the dangerous and permanently scarred. Without sentimentality or bathos, she nevertheless writes with a broad and fearless emotional range—hers is not the usual deadpan, hard-as-nails voice we hear so often in underworld stories. Instead, she approaches her characters with a tender lyricism, with writing that verges on the baroque, and in so doing she elevates the stories of her oddball characters, compelling us to see their full humanity and dignity.

Melanie Rae Thon’s most recent book is the novel Sweet Hearts. She is also the author of Meteors in August and Iona Moon, and the story collections First, Body and Girls in the Grass. Her work has been included in Best American Short Stories (1995, 1996), three Pushcart Prize Anthologies (2003, 2006, 2008), and O. Henry Prize Stories (2006). She is also a recipient of a Whiting Writer’s Award (1997), two fellowships from the National Endowment for the Arts (1992 and 2008), a Writer’s Residency from the Lannan Foundation (2005), and a fellowship from the Tanner Humanities Center (2009). Her new fiction appears in Conjunctions; Crazyhorse; Antioch Review; Image; Glimmer Train; Virginia Quarterly Review; Agni; Story Quarterly; Southern Review; Five Points; and Drumlummon Views.

Originally from Montana, she now lives in Salt Lake City, where she teaches in the Creative Writing and Environmental Humanities programs at the University of Utah.

My current project is a novel, The Voice of the River. I have been inspired by numerous high-profile searches for missing children—from the abduction and return of Elizabeth Smart to the miraculous survival of eleven-year-old Brennan Hawkins who emerged unharmed after four days and five nights alone in the Uinta Mountains. Other searches have ended more tragically—a boy never found, a young girl found murdered—but what unifies all these incidents is the way in which the search itself becomes holy: a missing child belongs to, and is loved by, a whole community. As strangers work together toward a single cause, they become family—bound by love not only to the child lost, but to all who gather. This is what I wish to illuminate in my novel about a search for a missing boy: the web of compassion, astonishing grace in the midst of suffering, what Edward Galeano calls “the potent magic, a luminous mystery that redeems the human adventure in the world.”

I am struck by the miraculous life-affirming wonder of the more-than-human environment, the never-ending swell of creative abundance. As Doctor Rowan Williams (Archbishop of Canterbury) says in the film Planet Earth, “Wilderness always speaks to human beings of Transcendence: in the widest possible sense it says, You as a Human Being are part of a System which is not just about your needs and your concerns. Like it or not, you are part of something immense and very mysterious.”

One of my wonderful readers (Lance Olsen) describes the point of view in my novel as “Oceanic Consciousness.” I love this! He means the perceiving consciousness embraces all living beings. This sensing presence swirls around a person, a bird, a bear, trillium blooming in dark woods, snow, stones, pines singing—moving closer and closer, loving that being tenderly, finally merging with another sensibility, perceiving and knowing as one, before swirling out again to embrace and love another.

He said the effect (for him) was the recognition that we are all one, all immersed, all part of one another. We are immersed—in air! (Isn’t the breath we share with birds holy?) All boundaries are illusion; all are permeable. Saint Catherine of Siena expresses this belief with simple eloquence: “God is in the Soul and the Soul is in God as the Sea is in the Fish and the Fish is in the Sea.” A powerful current of shared memory and experience flows through the novel, moving not only between human beings, but also forming a surge of communication and exchange with the whole animate environment. For me, for the living beings in my story, this ceaseless prayer is the voice of the river.

“Love doesn’t split into loving and being loved. The love of God is God’s love. Beyond that, the highest wisdom is Silence.” ~ Jim Corbett, Goatwalking

“River’s Edge” (in Issue issue 58) is an excerpt from the novel.

Links to Thon’s work on the Web:

“Tu B’Shvat: for the Drowned and the Saved” in Drumlummon Views
“Deer Song” in Conjunctions
“Writing, Like Prayer” in Glimmer Train
“Translation” in Smokelong
Excerpt of “Confession for Raymond Good Bird” featured on the National Endowment for the Arts website.
University of Utah