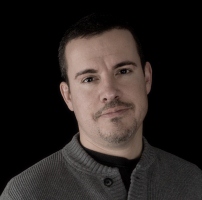 Tony Woodlief is a writer of remarkable range. Unembarrassed by emotion, brutally honest about the worst of us (and of himself), he writes exquisite prose about dark things. He’s written heartbreakingly about the history of his family, a story that involves the profoundest tragedy—the loss of a child—and the most disarming comedy, as life goes on with the remaining boys, potty humor and all. He also occasionally writes fiction, and his surprising short story “Name,” set in a Khmer Rouge camp in Cambodia, is among the pieces published in Image that we hear about most often—it’s unabashedly about love and virtue, and the triumph of what is human in an inhuman situation; “Elective,” the story we’ve included here, starts out like an absurd joke, but turns into a sustained and sincere engagement with a very old theological question. In his personal creative nonfiction, including as a Good Letters blogger, Tony has never been shy about his own pain and his own shortcomings. He writes heartbreakingly about the coming apart of a marriage and the sense of isolation and despair that accompany it. As editors we sometimes encourage writers who seem too closed to “open a vein” and bleed on the page a little. Tony has never needed to hear that advice, but he also writes with a tough-mindedness, an earthiness, and a serious theological underpinning that save his work from feeling like unformed confessional soup. He’s too frank for the reader to feel sorry for him. He’s capable of provoking a much deeper kind of empathy, and of getting us to look at things we might rather turn away from.

Some of Woodlief’s work is in Image issue 74. Read an excerpt here.

Tony Woodlief was raised in North Carolina, but spent many years in the Midwest before recently moving back to a small town in his home state. Along the way he picked up a PhD in political science from the University of Michigan, and an MFA in creative writing from Wichita State University. He’s mostly earned a living managing or consulting for education-related non-profits.

Tony’s creative non-fiction essays have appeared in The Wall Street Journal and The London Times, and his spiritual memoir, Somewhere More Holy, was listed among Image’s top ten works of 2010.

His short stories, meanwhile, two of which have been nominated for Pushcart Prizes, have appeared in Ruminate, Image, and Saint Katherine Review. His newly completed novel, The Dead Boy, is in search of a home where there are still books on shelves.

In some of my latest projects, my protagonists strain across—or shrink in terror from—the divide between head knowledge and the deeper knowing which comes to us sometimes in concert with, but other times absent (or in spite of) the senses. Psychology and theology have failed them; they are disintegrating. One investigates his suicide, another travels the countryside buying and burning copies of his own book, another is a church secretary who secretly eats hymnal pages to ameliorate an inescapable emptiness.

I’m trying to reflect this knowledge-knowing divide in my prose without ever naming it; to diagnose it directly, after all, is to fail to bridge it, to suffer, as a writer, the same affliction gripping my protagonists. I’ve been experimenting with shifting between past and present tense, and between third and second person, and with diction that evokes clinical examination in some places, and perception, intuition, and faith in others. I’m also experimenting with stories about monsters, because I imagine they must be pretty peeved at moral ambiguity and ambivalence. I imagine the best part of monsterhood is to be completely unmoored from the dictates of virtue, and if that’s just another lifestyle choice, well, what makes a monster special? In one story, dark creatures spring up to keep people from churches. They need some lodestar of virtue unsullied, a counterpoint that confirms their existence. In another, I afflict the world with a simultaneous vampire and zombie invasion because, well, who saw that coming.

My novel, The Dead Boy, is about a boy growing up in rural North Carolina, trying to learn the secrets of his disintegrating father, a Vietnam tunnel rat who is half priest, half warrior. There’s knife fights, fistfights, a flood, revenants, Indian chants, a terrorist bombing, and a death-defying bicycle stunt.