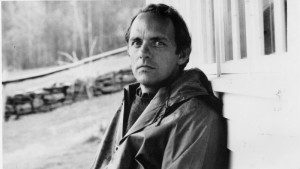 Writing down the life story of an esteemed and holy man is no easy task. Just ask Reginald, the eager and at times fawning biographer who documents the life of an uncooperative hermit in Frederick Buechner’s ninth novel, Godric.

Or ask Dale Brown, who—though his subject is much more willing than Reginald’s—just might have something in common with that enthusiastic biographer-of-a-near-saint. Brown, long-time admirer, scholar, and friend of Frederick Buechner, has penned The Book of Buechner, a survey of the life and writings of this much-loved novelist, essayist, and minister. The former director of the Festival of Faith and Writing and now the director of the Buechner Institute at King College in Tennessee, Brown provides a survey of Buechner’s works—from his earlier, pre-Bebb novels (which Buechner tends to dismiss) through his recent memoirs.

When he first encountered Buechner’s fiction, Brown appreciated the way it portrayed “the reality of suffering and the legitimacy of doubt in marvelous counterpoise with the subtle sense that lives just might be going somewhere.” With that same tenacious faith that God speaks into the stories of our lives, The Book of Buechner weaves together various parts of the story of Buechner’s life, including biographical details, a history of his seminary education (where Paul Tillich and Reinhold Niebuhr both played important roles), and close studies of Buechner’s books—a chapter is devoted to each of eleven books. The book also contains extensive footnotes, a topical index, and a bibliography of Buechner’s writings. But one of the best things about Brown’s approach is that he devotes the majority of pages to discussing Buechner’s works, so that the portrait of the author that emerges in The Book of Buechner emerges from the books themselves.

It’s not surprising, then, that Brown’s portrait of Buechner bears much resemblance to his characters—a man grappling with doubt, persisting in faith, and humbly listening for hints of meaning and grace. Perhaps the best endorsement comes from Buechner himself, who has written in the foreword to the book that Dale Brown “not only understands cerebrally what I was trying to say about the ragged, clay-footed crowd of saints and near-saints in whose company I have spent so many years of my life—Godric, Brendan, Jacob, and the rest—but has a real feeling for their oddball beauty and humanness and moments of holiness.”