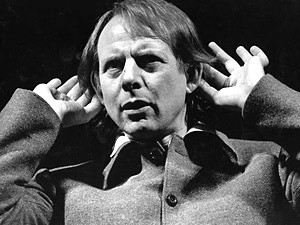 Recently, I was home sick catching up on my reading. Flipping through an accumulation of The Economist magazines, I began in the back with the obituaries…a singular and fascinating specialty of this publication. What greeted me was the obituary of German composer Karlheinz Stockhausen, who died December 5 at the age of 79.

Ironically, I had only just read Alex Ross’s The Rest is Noise: Listening to the Twentieth Century, which reacquainted me with Stockhausen’s views and legendary antics. (Mr. Ross is the music critic for the New York Times; to sample this wonderful book, see www.therestisnoise.com)

For many decades, Stockhausen reigned as one of the archdukes of modern music. Stockhausen and his menagerie in Darmstadt held considerable influence over postwar classical music. The watchword from Darmstadt in those days was freedom. As quoted by Ross, Stockhausen claimed that “Schoenberg’s greatest achievement was to claim freedom for composers: freedom from the prevailing tastes of society and its media; freedom for music to evolve without interference.” All well and good, but in Darmstadt this freedom did not extend to the prior musical traditions, these being declared analogous to fascism.

This is an amusing, dizzying whirlwind tour of the fads of the musical avant-garde across three decades. By the late sixties Stockhausen’s experimental sounds had found their way into pop culture with the likes of Frank Zappa and the Grateful Dead citing his influence. His iconic status was sealed at the release of the Beatle’s Sergeant Pepper with his image on the album cover. This was his zenith, and in the seventies he began to fade as the times passed by his stylistic projects.

OK, I have to admit that I found him to be lots of fun. The whole show was amusing and seductive.

But not everyone was amused. In a famous quote cited in The Economist, Sir Thomas Beecham, asked if he had conducted any Stockhausen, said “no, but he thought he might have trodden in some.” Far less reactionary than Beecham was composer Luigi Nono, who acutely observed of Stockhausen and his Darmstadt colleagues: “Their freedom is spiritual suicide.” Nono’s concern about the results of such totally self-referential activity brings to mind the age-old tension between artistic freedom, and (for lack of a better term) artistic efficacy.

As in the spiritual life, artistic vitality best flourishes in tension between true artistic freedom and an obligation to be useful to someone. Without a concern for cultural efficacy, the ecosystems of art can more easily become abducted by trendy fads and insufferable egos, with outcomes trending toward the ridiculous. Ironically, this result can actually diminish artistic freedom. Igor Stravinsky once observed: “We are grateful for our chains.”

Obligations, like community, tend to keep us honest. Likewise, in a spiritual sense we best discern the freedom of our faith when it is used in service. It is a seductive thought: to develop our artistic and spiritual selves in ideal laboratory conditions…without interference or obligation. But as we suspected all along, enduring artistic and spiritual growth seems to best to flourish within the context of a larger community.

With regard to his project of ‘advancing’ music without outside interference, Stockhausen remained unrepentant. He spent the better part of his last three decades writing a single massive (and as yet unperformed) work: an uber-Wagnerian seven-opera cycle based on the days of the week. Among the multitude of bizarre demands made by the score, Stockhausen asks that four amplified string players hover above the performance in helicopters, and that a “man-pencil” sharpen himself in a giant pencil sharpener.

I just can’t help smiling. To paraphrase Ross, Stockhausen went out in his own inimitable style.