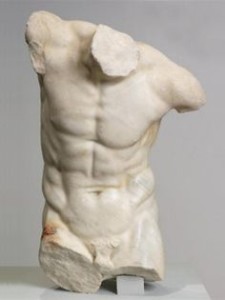 “We do know that Man, from fear or affection, has always graved His dead.” W H Auden

Bodies…The Exhibition has come to Cincinnati, along with its usual train of controversy. Ever since the German anatomist, Gunther von Hagens, began marketing his plastination process for permanently preserving corpses, his work has attracted fierce criticism and equally dogged support.

There’s insufficient space here to rehearse the many back and forth arguments regarding informed consent, provenance, legality and so forth. But an exhibition of human bodies surely raise questions pertinent to the intersection of art and faith.

In fact, Christian and Jewish leaders have raised concerns about these exhibits, while a recent Baltimore Sun article suggests that von Hagens stands in a line of heroic scientific liberators combating “powerful religious and cultural taboos.” (I had hoped the seriously deficient histories of Draper and White, those nineteenth century inventors of the dubious “warfare of science and religion” thesis, would have long ago gone the way of “Manifest Destiny” and “White Man’s Burden,” but there are some myths journalists and scientists just can’t live without.)

More to the point, I’ve listened to area physicians – including one from my own parish – argue for the beauty and spiritual instruction to be found in these exhibits, and I’m not deaf to such claims.

But what spirituality is being formed in this theologically semi-literate century? What theology of the person (a far richer object of reflection than “self”) is being elaborated here? In contemplating the beauty of plastinated human tissues painted cheery neon colors to distinguish muscle from cartilage from bone, are ticket holders viewing intricate Cartesian machines from which the soul has, thankfully, been liberated, or will some few be biblically literate enough to recall the Hebrew word nephesh, usually translated as “soul,” though far more earthy and corporeal than the Greek psyche.

I particularly like Wendell Berry’s exegesis of Genesis 2:7 in his essay, “Christianity and the Survival of Creation”:

“The formula given in Genesis is not man = body + soul; the formula there is soul = dust + breath. According to this verse, God did not make a body and put a soul into it, like a letter into an envelope. He formed man of dust; by breathing his breath into it, he made the dust live. Insofar as it lived, it was a soul. The dust, formed as man and made to live, did not embody a soul; it became a soul. “Soul” here refers to the whole creature. Humanity is thus presented to us, in Adam, not as a creature of two discrete parts temporarily glued together, but as a single mystery.”

Bodies, living and dead, are deep mysteries. The veneration of saints’ relics in Eastern and Western Christianity, despite abuses in later centuries, testifies to the heightened reverence early Christianity placed on the body (see, for example, Caroline Walker Bynum’s The Resurrection of the Body in Western Christianity, 200-1336). Not all cultures “grave” their dead – Mr. Auden to the contrary – but Parsi “towers of silence” and Lakota scaffolds are manifestations of the very fear or affection he gestures toward in his poem, “Archaeology.” Even Henry David Thoreau, the post-Christian, post-Unitarian Transcendentalist, exclaims: “I fear bodies, I tremble to meet them. What is this Titan that has possession of me? Talk of mysteries!”

It may well be such mysteries were on the minds of the exhibits’ creators even as they pressed these tinted human manikins into their permanently provocative and often humorous poses. Perhaps the farthest thing from von Hagens’ thoughts was the gray, mechanistic determinism Tom Wolfe explores in Hooking Up and I Am Charlotte Simmons. Perhaps Thoreau’s mysteries are precisely what we are being asked to contemplate. I don’t know. Still, I hope such questions trouble both those who go and see and those who stay away.

(Those interested may wish to read a relevant essay by art historian Michael J. Lewis in the January 2007 issue of Commentary. Since I don’t follow the Neocon press, I only just learned of Lewis’ article, but it’s quite timely.)