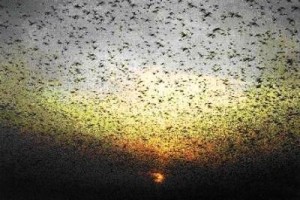 You were probably a better citizen than I was and watched the final Clinton/Obama debate before last Tuesday’s primaries in Ohio and Texas. I meant to, at least, and then got stuck in a Mega Disasters segment on the History Channel, entitled “Super Swarm.”

Its subject? Locusts. Its object? Me. Viewers or victims, sometimes it’s hard to tell.

But if you, like me until that evening, have never heard of the locust plague that struck America in 1875, then pull out your Bibles and open to Exodus 10 and Revelation 9. Because lest you think the eighth plague that Pharaoh incurred couldn’t have happened to such fictional extremes, if it happened at all, then think again and picture this: a swarm of locusts 1800 miles long and over 100 miles wide, a mile and a half high in the daytime sky.

That adds up to roughly three and a half trillion locusts covering an area of 198,000 square miles, blotting out the sun for five days straight as it moved across America like a second sky spawned of a certain pharaonic hardness in the heartland. Perhaps it had something to do with much of our nation’s ongoing insistence on slavery, as did its biblical antecedent, but I digress.

A year’s worth of crops wiped out in an hour. 200 million acres ravaged within a few days. It’s one thing to imagine “all the plants in the land and all the fruit of the trees” depleted in Egypt; it’s another to learn that even tool sheds across the Great Plains were attacked, their hardware stripped of all handles down to the blade for the residue of salt left from human hands.

No single image in recent history, be it real or imagined, has stayed with me like this one. And isn’t it wonderful when the itty-bitty imagination is left so thoroughly dumbstruck by reality itself? Granted the description in Revelation 9:7-9 is hard to beat:

“In appearance the locusts were like horses arrayed for battle; on their heads were what looked like crowns of gold; their faces were like human faces, their hair like women’s hair, and their teeth like lions’ teeth; they had scales like iron breastplates, and the noise of their wings was like the noise of many chariots with horses rushing into battle.”

Here, perhaps, we don’t hesitate to bang the gavel and cry, “Fiction!” Or, more fittingly, “Poetry!” But looking at these three nodal points of 13th-century B.C. Egypt, 19th-century America, and a point in the near or distant or imaginary future depending on whom you ask, I find it helpful, as one whose art and faith seem at times to co-exist in a state of mutually assured destruction, to consider the thesis of the contemporary theologian, John Dominic Crossan, who says in his magisterial In Parables, “that Jesus is proclaiming what might be termed permanent eschatology, the permanent presence of God as the one who challenges world and shatters its complacency repeatedly.”

Francis Ford Coppola—rather, to be fair, the screenwriter, John Milius—put it another way: Apocalypse Now. And if hindsight leaves us quick to dismiss those fiery Sunday preachers of 1875 who no doubt proclaimed in pulpits across America that it truly was the end of the world as envisioned by John, will we be so quick to say it isn’t if and when an equal plague comes our way?

According to various experts interviewed on the program, the climate change and general ecological mayhem at hand leave us ripe for a potential attack on a similar scale, this time heading north from Central America and the Yucatan Peninsula. If so, we might well be confronted with an immigration problem of an altogether different and entomological kind, one so nightmarish that it leaves the likes of Lou Dobbs wishing we had all that extra cheap labor to help clear the highways where commerce is at a standstill because of the endless “locust slicks.” (A phrase hard not to love for its sinister felicity.)

But don’t worry: most likely we would just transfer the famine to poorer countries by our mass purchase of their food supplies. Enter the black horse.

Bradford Winters is a screenwriter/producer in television whose work has included such series as Oz, Kings, Boss, and The Americans. Currently he is showrunner on the upcoming CIA drama for Epix called Berlin Station, starring Richard Jenkins. His poems have appeared in Sewanee Theological Review, Spoon River Poetry Review, and Georgetown Review, among other journals. In August his comic book Americatown, about a near-future enclave of American immigrants abroad, was released by Boom! Studios. He lives in Brooklyn with his wife and three children.