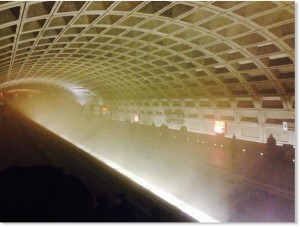 In Washington, DC’s Forgotten Quadrant the L’Enfant Plaza canyon brims with shapeless bureaucratic hives. It is a zone where plants die, words recycle, and paper-bloated cubes shiver like snowglobes when commuter trains pass. On a bad day, the red tape flows freely and fed lifers nap miserably. On a good day, your tax dollars are stewarded very slowly by pale, lonely people who need to get out, get some air, and take in something beautiful, if only to start the blood flowing back to their brains.

The Smithsonian Museums, including the Castle, the National Gallery of Art, and the Hirshhorn, are steps from L’Enfant Plaza’s government offices. When I began my job at one of the federal behemoths, I feared that if I stole over to the museums during a late lunch hour, I would have to dodge other bureaucrats; I fortified myself with justifications for taking a twenty-minute break in the gardens and exhibits. But each time, I found I was the only one of my kind. My sole companions were the security guards and, if I took lunch earlier in the day, a few scuttling tourists.

I quickly learned that there are several panaceas for bureaucratic malaise, and the Smithsonian Museums are not among them. The best-known cure is McDonald’s, followed closely by food-per-pound buffets. If gluttony can’t cure what ails you, there is the TV-in-the-cube set-up, favored by the “landed gentry” who have achieved stand-alone cubes with doors that open and close. There are entire floors of my building where the scent of McGriddles and the sounds of “The Young and the Restless” herald a moderately productive workday.

I work on a human rights issue that has yet to be consumed by the bureaucratic machine, so ours is one of the only dynamic programs within our office. This saves me from a great deal of drudgery. Still, there are Catch-22 moments in which five different people demand seven different retroactive forms, notarized, in triplicate, and signed in blood. Before you know it, you are joining in the bureaucrat’s game: playing it safe, stonewalling, and keeping copious files as you defend yourself from the cleaver of entrenched and invisible “policy.”

Hans Urs von Balthasar wrote that beauty, truth, and goodness exact equal courage from their believers. Inside the bureaucratic hive, it is starkly clear how much these three ideas need each other. Many of my Department’s programs were originally designed to foster the greater good of strengthening families, protecting children, and resettling refugees. Each launched under an evangelical banner of truth and innovation; now, their staffers’ cubes are stagnant, stale places. If the opposing muscles of beauty, truth, and goodness had been encouraged to work in concert from the first, would there be now fewer tin-hearted lackeys, blindly chewing machines, and bystanders believing that the engines themselves are gods, fated and untouchable?

The longer I pursue a double life, seeking justice in my day job and beauty in reading and writing, the more I’m convinced that justice without joy is as heartless as bureaucracy, and that beauty hoarded for the beautiful is an oppressor’s dream. Perhaps bureaucracy without beauty is one of evil’s most careful plots, aiming to take us all down as unhappy, numbed, “good” drones, even as some of the world’s most lovely meditations stand just outside the door.