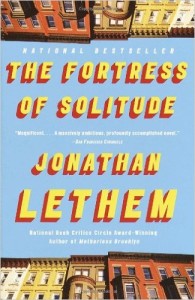 “In the same spirit, on Rachel’s principles, I’d been pushed out like a blind finger, to probe a nonexistent space, a whiteboy integrating public schools which were just then being abandoned, which were becoming only rehearsals for prison. Her mistake was so beautiful, so stupid, so American.”

“I can no more disown [the Reverend Jeremiah Wright] than I can disown the black community. I can no more disown him than I can disown my white grandmother—a woman who helped raise me, a woman who sacrificed again and again for me, a woman who loves me as much as she loves anything in this world, but a woman who once confessed her fear of black men who passed by her on the street, and who on more than one occasion has uttered racial or ethnic stereotypes that made me cringe.”

For some weeks now, I’ve been saying that I would finally get around to discussing Jonathan Lethem’s 2003 novel Fortress of Solitude and describe why I found this novel (among others) ultimately characteristic of the disappointments of contemporary fiction.

Today, though, all I can think about is how much there is in this haunting novel about race and class in 1970s Brooklyn that Lethem did get right. However much we like to think that we live in a post-racial society—and it’s possible to believe this, if you’re an upper-middle class professional who hangs out with mostly other upper-middle class professionals—the historic American wound remains an open sore.

I am writing this in the hours following presidential candidate Barack Obama’s Philadelphia speech in which he sought to distance himself from the incendiary racial rhetoric (“God Damn America!”) of his former pastor’s sermons, while recognizing the diversity of attitudes—including anger, and perceived injustice—among African-Americans.

In fact, I was in the car today on the way to take my son to a medical appointment, and straining to hear on the radio the pundits’ first reactions to how that speech “played,” when I rounded a corner in my no-longer-exactly-working-class neighborhood to witness another classic (clichéd?) American racial tableau being played out before me: Police cars were nosed across the street at angles with lights flashing (at 11:00 a.m.!), and a black woman was bent forward over the fender of one of the cruisers being handcuffed by white cops. It looked like there had been some kind of domestic dispute.

While it’s an occurrence that’s not exactly common, this bald display was an uncomfortable reminder of the unresolved racial tensions that lurk under the surface of my generally cheery presumptions about our very diverse neighborhood’s supposed multicultural harmony. When I say this, I am taking neither the supposedly “liberal” position that would hold the arrested women to always be the righteous victim, or the conservative “law and order” view that would have her getting what she’s deserved. I just don’t know.

What I do know is that the wound remains. In the wake of the Obama speech today, I was dumbfounded to discover, on Andrew Sullivan’s otherwise mainstream political site, a vigorous online discussion of the speech in the context of its references to William Faulkner. (Find it here) Let’s hear it for the value of a humanities education!

Fortress of Solitude is filled with just this kind of complexity. Child protagonist Dylan Ebdus is brought to drugged-out 70s Brooklyn by his idealistic hippie parents (his mother is the “Rachel” cited in the quotation above), then grows up in the shadow of black-dominated culture, which comes to be represented by Mingus Rude, the boy next door he comes to idolize and who, in this hostile neighborhood, very literally saves him. But Dylan Ebdus is no innocent victim, and Mingus Rude no simple hero, either—as the events of this 500+ page novel detail.

My problem with the novel (and my tease to all of you has gone on too long, I realize) has to do with “magical realist” elements such as flying and invisibility interposed into what is otherwise a finely textured realistic novel. For me, the friendship and love between Dylan and Mingus—think of these names, and all their multivalent meanings!—is enough, and it’s more than enough for you to run out and buy a copy.

If you do, settle in and drop me a line about how it is the novel affects you, because I am sitting with it again these days, and I would sure love some company.