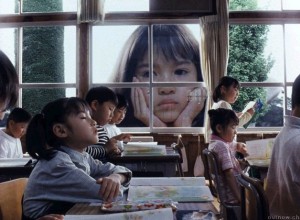 As I write this, my father is busy with lumber, saws, and measuring tape. He’s making alterations to three dusty panels out of a backyard storage shed—pieces my grandfather once cut, painted, and linked together with hinges and pins.

Dad’s doing this because I recently watched director Katsuhito Ishii’s 2004 film The Taste of Tea. Many days after I returned the DVD to the public library, I’m still haunted by its whimsical surreality—and by it’s startling conclusion.

Which gave me a big idea.

It hit me as I watched the story of eight-year-old Sachiko, an adorable Japanese girl who likes to dream on the front porch. Sachiko’s peculiar, playful grandfather likes to spy on her from his bedroom window, disappearing the moment she turns her head to catch him. Grandpa’s a little annoying, maybe even senile. But his watchfulness becomes an important factor in Sachiko’s struggle to break a curse: She believes she’s being stalked by a mysterious phantom—an annoying giant who looks just like her.

That’s just one of the plotlines in this saga of the Harume family. They share dinners, but little else, as their days keep them busy with private dreams and nightmares.

Sachiko’s parents, Nobuo and Yoshiko, have their own dream-troubled lives. Nobuo is a hypno-therapist who ministers to his patients by finding his way into their private—and sometimes bizarre—fantasies. Yoshiko has invested several years in raising children, but now she’s eager to fulfill her postponed dream of being an animator. Then there’s crazy Uncle Ayano. When he’s not telling wild stories or bringing intriguing strangers to dinner, he’s a producer who brings to life the musical dreams of others.

Perhaps the film’s most endearing dreamer is Sachiko’s older brother, Hajime, an awkward adolescent prone to emotional turmoil. When Hajime’s smitten by a beautiful classmate, his love becomes an obsession. To connect with her, he’ll have to enter the world of Go, the strategy game she loves.

While it may seem that the Harumes’ stories are separate plots that just happen to be bound in one storybook, one subtle thread weaves them into a meaningful unity at the film’s emotional conclusion. If The Taste of Tea has a theme, this is it: If we are to love one another, we must first look closer and truly see one another. We must humbly attend to each other’s mysteries—private languages, unrealized dreams, and unspeakable struggles.

The Taste of Tea has been described as a cross between The Royal Tenenbaums, Princess Mononoke, and TV’s The Office. A strange combination, but it fits. And yet, unlike the Tenenbaums’ self-absorbed patriarch, Grandpa Harume is devoted to his family. He may be crazy—he sings songs of praise to his bathwater. But he casts off inhibitions to help his daughter achieve her artistic aspirations. And he reaches out to Sachiko in a way only she can understand to help her overcome that haunting spirit.

Grandpa baffled me at first. I thought he was just another oddball in a film that’s full of them. But I was moved when the family discovers the depth of his love for them, and that revelation brought to my mind a gift that I have taken too much for granted.

And that’s why I asked my father to take those three wooden panels out of storage.

Grey-blue and heavy, they were painted to match my bedroom. Linked together, they make a puppet stage—the most significant surviving souvenir of my childhood. My grandfather built it for me.

It’s probably the only puppet stage he ever built. Norman Rydman was a carpenter who built houses around Portland, Oregon, spaces large and small that hundreds of people have called home. A man of few words, with a low tolerance for sentimentality, his expressions of love took shape in a garage workshop that smelled as sweetly of sawdust as my grandmother’s kitchen smelled of fresh, frosted butterhorns.

Growing up, I wasn’t interested in sawhorses, lumber, or toolboxes. But “Papa” didn’t mind. He’d seen me pounding on the keys of an old Royal typewriter with my index finger from the age of seven, building my own stories. He’d observed how Jim Henson’s Muppets sent me scrambling for paper, string, and crayons to make puppets of my own characters.

And so, with his hard, square, calloused hands—a workshop accident had taken half a thumb—he built me a platform on which my stories could come to life. And whenever I dropped the pins into the hinges that held it neatly together, I knew that he loved me.

The final scenes of The Taste of Tea brought that all back. A work of Grandfather Harume’s imagination brings these wandering dreamers together, revealing how deeply he delights in their particularity and personality. Like the budding artist in Edward Yang’s masterpiece Yi Yi—the boy who photographs the backs of people’s heads—he revealing his loved ones to themselves through eyes of affection.

Grandpa Harume’s revelation resonates with me not only because I grew up in the shelter of that kind of love, but because I still have the sense that I am observed, known, and cherished even when I struggle in solitude.

Ishii’s film provoked me to call my father. I asked him to dust off the puppet stage and make some measurements. He informed me that the platform of the stage window rests exactly 29 inches from the ground.

With his own tools, my dad is transforming the stage into a writing desk. The platform where puppets once played will serve as a new stage for prose. If it works as well as I’m imagining, I’ll soon be leaning on the work of my grandfather’s hands—and my father’s hands—every time I sit down to dream. And that seems only right. I’ve been exploring the world on foundations they established even before I could spell my own name.

If my grandfather is still watching me, I hope that he is pleased.