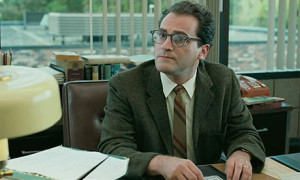 There’s an envelope full of cash on Larry Gopnik’s desk.

He didn’t put it there. But he can guess who did. A student in Larry’s physics class has been begging him for a good grade. This money looks like a bribe. Nevertheless, when Larry goes seeking a confession, he’s given a confounding answer….

Larry is a play-by-the-rules kind of guy. He cares about precise measurements; he knows the exact position of the property line around his suburban Minnesota home. He cares about fairness; he believes his college should grant him tenure. When he discovers that Mrs. Samsky, his sexy neighbor, sunbathes nude in her yard, he shows more restraint than King David ever did. He stays where he belongs.

Everyone else may live lawlessly, but Larry’s trying to be “a good man.” He’s determined to refuse the mystery money.

So you’d think that God would smile on Larry for his righteousness, and give him a blessing.

But no, blessings elude Larry at every turn. Somebody’s writing anonymous letters to the tenure review board, trying to tarnish his reputation. The Columbia Music Company is billing him for albums he didn’t order. His son is twenty dollars in debt to the schoolyard bully, and his daughter’s a thief.

Arthur, Larry’s brother, is camped on the living room couch like a curse. When he’s not scribbling numbers in a notebook he calls “The Mentaculus,” he’s tending to a sebaceous cyst that oozes like the ears of Madman Mundt in Barton Fink. (Is Arthur a dybbuk, like the malevolent phantom in the Jewish folk tale that serves as the movie’s prologue?)

Worst of all, Larry’s wife Judith is having an affair with their windbag of a neighbor, Sy Abelman. And Sy’s gestures of condescending sympathy for Larry are somehow more infuriating than the affair itself.

If this were a typical Hollywood comedy, we’d know what was coming: flimsy platitudes about the power of positive thinking, or about some kind of generic “faith” (probably faith in oneself).

Instead, this is a film by the Coen Brothers. Only the naïve will anticipate a happy ending. Don’t get me wrong—A Serious Man is several barrels full of laughs. But it’s as serious-minded about suffering and misfortune as any film I’ve seen, including the classic Vittorio de Sica film, Bicycle Thieves.

In Bicycle Thieves, Antonio Ricci—unemployed for two years and desperate to feed his family—finally gets a job. But it requires a bicycle, so he and his wife sell their bedsheets to pay for one. Things are looking up…until that bicycle is stolen on his very first day at work.

Throughout the rest of the movie, Antonio hunts the thief. He’s right to be upset. But watch what happens as he becomes increasingly desperate for justice. While the poor gather for Mass, Antonio never pauses to look heavenward for mercy. Instead, he takes more reckless measures, eventually behaving worse than the thief.

By contrast, the Coens’ persecuted family man takes time to seek spiritual counsel. Surely one of the community rabbis can justify the ways of God to Larry.

But the rabbis are little help. One tells him to look on the bright side. Another tells him a confounding tale about signs and wonders that have no explanation. And the legendary Marshak? He has more important matters on his mind.

Just as Antonio is reduced to wicked behavior, so we begin to see cracks in Larry’s character. He may be inviting catastrophe by way of a crime that Coen Brothers fans have seen before—passivity. The troubled title character in The Man Who Wasn’t There would have been sympathetic if he hadn’t been so…pathetic.

A Serious Man is a stronger film than The Man Who Wasn’t There. It’s scripted as efficiently as Fargo, with a rumble of impending doom that recalls No Country for Old Men. As in Barton Fink, men who proclaim virtuous ideals end up compromising. As in so many Coen films, money brings out the worst in seemingly decent people.

But A Serious Man is distinct in the Coen canon for its aggressive theological inquiry. They know this territory—they’ve talked about growing up in a community similar to Larry’s, where they received some kind of religious instruction six days a week. Their storytelling shows that they’ve considered the various rationalizations we construct in order to cope with hardship. And they see common flaws in those structures—hypocrisy and self-interest.

We demand justice, but when justice turns its harsh gaze upon us, we beg for grace. On his deathbed, the atheist W.C. Fields worriedly sifted the Scriptures “lookin’ for a loophole.” We want a program that’s blind to our sins, brings justice to others, and makes everything right—that is, working everything to our advantage.

Larry’s brother Arthur may manipulate the numbers to win at gambling, but his choices add up to judgment. As Larry whines, “I’ve tried to be a serious man. I’ve tried to do right,” we know that his righteousness—whatever its measure—is not a shield against calamity.

So, if the law cannot save us, what’s left? Lawlessness? A Serious Man occurs as the Summer of Love is heating up, but the promiscuous pothead Mrs. Samsky does not make these “new freedoms” seem very promising. Like The Big Lebowski’s nihilists, those who “believe in nothing” look like buffoons.

Is there any glimpse of hope or grace in the Coens’ vision?

They seem too sharp to miss the profound irony of their own fleeting joke near the end of the film. During a bar mitzvah, a rabbi lifts the Torah scroll. But his arms are trembling at the weight of the law. As the burden becomes too much, he loses his balance and utters an exasperated wheeze: “Jesus Christ!”

Did the Coens recognize the possible significance of that punchline?

I don’t know. For now, I’ll accept the mystery.