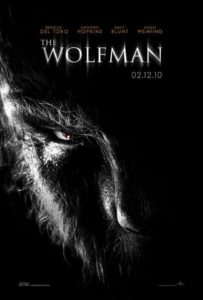 [Caution: This article on The Wolfman contains significant plot spoilers.]

If I recommend it, those who believe that all God-fearing people should steer clear of horror movies will come after me with torches. They’ll be joined by my film-reviewing colleagues, who have pointed out the film’s considerable flaws—and I can’t argue with them about its shoddy artistry.

The Wolfman is a very silly film. It fails to develop its characters, jolts us relentlessly with less-than-scary surprises, and fails to develop the necessary dread. The storytelling would make a Cliffs Notes version seem elaborate. Anthony Hopkins’ Scottish accent is intermittent, and Benicio Del Toro is utterly unconvincing as his son. (I suspect Del Toro was cast because he looks like a man afflicted by a terrible curse, or a least a nasty migraine.)

But what can I say? I had fun at the movie. Director Joe Johnston, a last-minute replacement for Mark Romanek, manages to deliver the foggy forests, haunted mansions, and spine-tingling transformations that I love best about the genre. I enjoyed the campy tone, the shadowy production design, Rick Baker’s remarkable special effects, and the play-it-straight performances of Del Toro, Emily Blunt, and Hugo Weaving in costumes that look quite uncomfortable.

The story introduces us to Lawrence, a civilized and sophisticated man, the son of the mansion-dwelling Sir John Talbot. He’s a Shakespearean actor, familiar with the philosophical torments of Hamlet and Macbeth. We might expect him to be the hero.

But alas, Lawrence soon inherits a local curse, and manifests his inner monster at moonrise.

His transformation is terrifying in part because he’s a sympathetic character. He didn’t ask for a curse. But his strength, sophistication, and conscience cannot save him from reckless impulses. He just can’t help himself.

I risk making a fool of myself if I suggest that this is all timely and relevant, but….

Forgive me, I’m distracted. A “breaking news” headline about a disgraced celebrity just grabbed my attention. One of our national heroes has just been exposed as a spectacular jerk.

Have you heard about this? I’ll tell you, but as I don’t want to contribute to tabloid gossip—so let’s just call him, oh, “Tiger Edwards.”

Until recently, Tiger Edwards had carefully cultivated a squeaky clean public persona. Some of us respected him. Some of us even voted for him. He played a strong game and endorsed respectable products. And his wife seemed a decent lady.

In the last few weeks, advanced science has proven the guilt of this cultural icon. Scientists have explained the chemistry behind his frightful transformation. He can’t help himself, you see, because we’re animals—all of us. They say most people would behave the same way if it weren’t for societal pressures to conform.

Psychologists? They’ve some diagnoses of their own. Tiger Edwards is suffering from a psychological condition, a sickness, an addiction. Nothing a little rehab can’t cure.

There’s a veritable smorgasboard of explanations for this hero’s destructive acts.

But I digress. What were we talking about?

So, what happens next for poor Lawrence the Wolfman? Well, the movie takes a comic turn.

A doctor, assuming Lawrence’s symptoms to be some kind of infection, stitches him up and tells him to take it easy. The audience laughs.

A local vicar arrives with a small army intent on condemning and executing an agent of Satan, hoping to send Lawrence straight to hell. The audience laughs at his sanctimony.

Then come the psychologists with their extreme therapies. They inspire the biggest laughs.

Why are we laughing? Haven’t we been taking these same diagnoses seriously in real-world coverage of Tiger Edwards’ disgraceful behavior?

I think The Wolfman’s various judges make us laugh because, in spite of the movie’s flaws, the story spotlights the folly of our best efforts to eradicate sin through our own power. We laugh because we know that medicine, righteous anger, and psychotherapy will not explain or solve the problem of evil—which really is the problem at the root of Tiger Edwards’ behavior. And ours too.

If we sympathize with Lawrence, it’s because we suspect that there is such a thing as a curse at work in this “quintessence of dust.” We know that even at our most civilized, we’re still beastly in some way. We’ve been there, done that. And we cannot save ourselves.

Late in the movie, the woman who loves Lawrence admits that she’s willing to believe that he might be cursed. She’s also willing to believe that “magic” or “God” might offer redemption. But alas, in this movie’s world, Lawrence’s only hope for salvation is a mercy killing at point blank range with a silver bullet. This solves nothing. The film suggests that the curse will go on, even in the disguise of of a respectable and authoritative figure.

Now, that’s horror. And that’s why nobody’s laughing during the film’s tragic climax.

All of us sinners had better hope for something better than The Wolfman’s dead ends.

In his excellent essay “Horror, the Grotesque, and the Macabre: A Christian Appraisal,” Steven Greydanus quotes Pope John Paul’s Letter to Artists. The Pope says that when artists “explore the darkest depths of the soul or the most unsettling aspects of evil,” they’re giving voice to “the universal desire for redemption.” The Wolfman persists in all its retellings because it doesn’t just give voice to that desire. It howls.