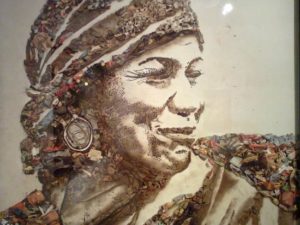 In Rio de Janiero, there’s a saying that even Jesus turns his back on the poor.

In a way it’s true. Early in Lucy Walker’s documentary Waste Land, a helicopter carries us around Christ the Redeemer, a white statue towering over Rio, arms outstretched embracing the wealthy of Copacabana, Ipanema, and Leblon. Behind it, we descend into the world’s largest landfill—Jardim Gramacho.

Thousands live on that refuse heap. They’re the catadores—Portuguese for “garbage pickers”—struggling to survive in favelas ruled by drug-dealers, earning money by sorting through the 7,000 tons that are delivered daily in dump trucks.

We might see the living Christ more clearly in the efforts of the few who reach out to the catadores.

Our guide is Vik Muniz, an artist world-renowned for making pictures with unlikely materials like dirt, sugar, string, and chocolate syrup. The Brazil-born artist, now based in Brooklyn, says he’s taking time off from the fine arts world. “It’s a very exclusive, restrictive place to be. What I really want to do is be able to change the lives of a group of people with the same material they deal with every day.”

That is to say, he’s ready to work with garbage.

So Muniz goes “behind Jesus’ back,” remembering his childhood in a poor Brazilian neighborhood where the spreading patches of mold on his bedroom ceiling first inspired him to make art. Studying aerial views of this “garbage world,” he points to the bridge, the landfill’s gateway. “This is where everything not good goes. Including the people…individuals who are, within Brazilian society, not different than garbage itself.”

You may find yourself bracing for a pious documentary, the rich exploiting the poor so they can “perform” goodwill for the cameras. Muniz’s message is rather obvious: “Garbage…is everything that nobody wants, and when it disappears from everyone’s lives, rich or poor, it doesn’t disappear at all, it appears here, like a conjuring trick gone wrong.”

You can see the big philanthropic finale coming: The artist hovers with a camera more than 70 feet above warehouse floor, while catadores arrange four tons of trash across massive portraits of themselves. Muniz directs these collaborative projects, readying images for auction that may bring help to the needy.

But this conversion of garbage into humanitarian aid is just the beginning. Practical charity (or “agape” love) gives way to life-changing intimacy (something closer to “eros”). Both artist and subject are changed by the occasion of an inquisitive gaze.

As Muniz tells his subjects that their pictures will end up in museums, he comically mimics museum-goers. He leans forward, squinting at an imaginary painting. Then he leans back, steps away. “Have you seen this? Everyone does it. Are they drunk?”

The chosen catadores nod. They get it.

“The moment when one thing turns into another is the most beautiful moment,” says Muniz. “A combination of sounds transforms into music. And that applies to everything. That moment is really magical.”

From a distance, catadores looked like ants. Now we’re leaning in, discovering exquisite personalities and radiant smiles in the thick of putrid smells, scars, trash, death. Any high-minded political agenda blurs. I won’t soon forget the people I met through the gazes of Walker and Muniz.

Tiaõ, a “picker” since age 11, is the catadores’ charismatic leader, organizing a co-operative so they can declare their rights with a unified voice.

Isis, cast aside by a married man who made false promises, feels like a piece of the trash heap she calls home.

Zumbi has built a lending library from books he’s found in the trash. He’s absorbed all that he’s read—especially Nietzsche. I find myself hoping he’ll discover translations of Lewis or Chesterton.

Eighteen year-old Suelem, who started scavenging when she was seven, has two small children dependent on her.

Magna may be beautiful, but her fellow bus-riders cringe at the putrid cloud that follows her home from work. She clings to a common refrain among catadore women: At least she’s not a Copacabana prostitute.

In a recent Good Letters post, Laura Bramon Good talked about the hard but redemptive work of confessing our weaknesses in community. Similarly, Vik Muniz and his colleagues are bringing all that we’ve buried out into the light to reveal its value. Plastic bottles. Expired electronics. Boxes. High-heeled shoes. Reels of old film. Body parts. Human beings.

The trash that the people rejected has become the cornerstone for something beautiful and redeeming. Why does that sound so familiar?

Walker says, “Just as Vik wants the portraits to serve as a mirror in which the catadores may see themselves, so I hope the movie serves as a means for us…to zoom all the way in to caring about someone who was previously as far away as it’s possible to be.”

Waste Land achieves this. It also reminds us to back up for a God’s-eye-view, a picture of the whole of our lives. Someday, in the twinkling of an eye, one thing will turn into another. Love’s design will be revealed, made of “recyclable material.”

Seeing himself in a portrait, Tiaõ gasps. “I never imagined I’d become a work of art.”

Irma’s grandchildren gaze upon her portrait made from trash, while she reflects on thirty years in the garbage. “My life began there, thank God.” In the reverent hush of the children’s gaze, Irma’s portrait becomes an icon.

Would that we could see each other’s faces—family, friends, and strangers—in such a frame. Leaning in. Stepping back. Leaning in again.