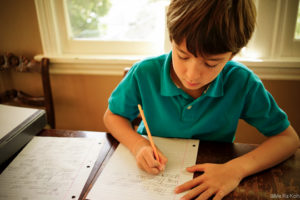 It’s Rhode Island Avenue and busy, so parents park carefully, then shepherd their children up the concrete stairs to the “Morning Door” entrance. Holding my toddler on one hip, I kiss my 6-year-old son, if he will let me, and pat the neighbor child on the shoulder. I greet the other parents coming to and fro, while all the children run around the sidewalks and the tiny playground.

At last the door opens, the children line up, and one by one, each shakes the school director’s hand, and is greeted by name. Then they walk through the old steel doors, into the drafty high-ceilinged classrooms, and there the learning begins.

It is still a Catholic school, but it is not a “Catholic school.” Christian Family Montessori was started in 1981 by a group of young parents, more or less Catholic Charismatics, who wanted to implement Maria Montessori’s methodology of empowering children to learn with concentration and independence.

They also wanted a school that would be distinctively Christian, and would convey the rich truths of faith in Montessori fashion, using the Catechesis of the Good Shepherd devised by the Catholic educator Sofia Cavalletti.

Further, they wanted to found a school that would be that rarest of beasts in the private school world—one that would be affordable to middle- and working-class families, in an area of much diversity and modest incomes, surrounded by the hazards and decay of the city.

At the very first, the school was located in the capacious living room of a pair of founding parents, the Marescas. Catherine Maresca recalls dressing her children and sending them out the back door and around to the front, where they had to be formally greeted by the teacher that the group had hired.

A few months later, the school had the option to move down the street, into the former school building of St. James Church, with its traditional bells and blackboards and small white statues of the Blessed Virgin Mary perched in the corners of the rooms.

Thirty years on, there’s still more than a little of the home-school co-op feel to the place: students sprawl on the cement floors of the echoing hallways counting beaded number chains; primary students head down to the library to hear books read by volunteer parents. The oldest children, ages 9-12, research their interests deeply, raise funds for their sister school in Africa, and plan field trips into the wider D.C. world.

There is no work at all on computers until the students reach fourth grade.

All the while, parents staff the library, monitor lunch, and haul boxes and papers off to be recycled. It’s a parent group of scrimping at-home moms (one, barely in her thirties, just had her fifth child), social justice activists, and public interest lawyers—the kindest people in the world, and ferociously well-educated, but not a Master of the Universe among them. Some third of the student body—many of them multi-child and modest families—are on financial aid for the already-low tuition.

When each class group has its appointed time to visit the chapel, or “Atrium,” they learn about the furnishings of the Catholic altar; the geography and landmarks of Jerusalem; and they pray for all the lambs that the Good Shepherd protects.

“When the Parousia comes,” my son asks me one day, “will there still be Star Wars?” Another reason I love this school.

But now it is time for the school to move again. Its future at the old Catholic school building is no longer certain, as the church tries to figure out its priorities in a changing neighborhood. For a while it appeared that Christian Family Montessori might even have to close, as a parent committee toured more than 100 other buildings for rent nearby, all of them ultimately unsuitable.

At last we have found a space on the verdant grounds of an inner-city Episcopal church. But to make the move by next fall, we have to raise half a million dollars to renovate the classrooms. We’ve managed to raise more than $235,000 in pledges to date, but reaching $500,000 is a daunting task in a parent community that has already, for a long time, been giving all they’ve got.

Can I ask you all to pray that we will succeed?

It is my semi-annual observation day. My six year-old son sits at a round table in the classroom, his head bent over a page of wide-ruled paper. Biting his lip in concentration, he guides his number 2 pencil over the page, writing the names of animals in cursive. All around him, other students are working on different activities, the room filled with conversation in a low continuous din.

From where I sit, I can see he still doesn’t have the hang of it yet, but he’s moving the pencil inexorably forward—the letters spiral across the paper with momentum if not yet with precision. Cursive script may be in decline elsewhere, but not here, where learning to write in cursive is considered a boon to fluidity in reading and composition.

He’s a social boy, easily distracted and impulsive. “I don’t know how your son is ever going to survive in a Montessori school,” one exasperated teacher at a traditional nursery school told us before we came here.

And he does get up, occasionally change focus, but the wise teacher and her assistant gently direct him back to his work, where once again he draws pictures and writes chains of cursive nouns, all on the theme of “What Do Animals Eat?” In the many weeks now that he has returned to this work, he has become a veritable Adam: The rooms of our house are littered with colorful drawings of the animal kingdom, carefully named.

I watch him come back again and again to that center, that focus, as he puts pencil to paper—and I see a flash of the Divine Image, and the moment of its creativity sparking forth.