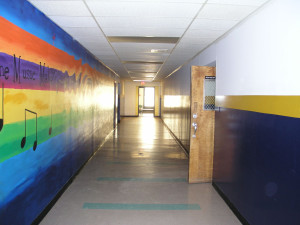 With few exceptions, most of the new people I meet cringe perceptibly when I inform them that I teach high school freshmen.

“Better you than me,” they might say. Or, “God bless you. That must be so difficult.”

I think that the assumption that underlies that response is that teenagers must be terribly difficult to be around. And I think some legitimate reasons exist for that response.

Teenagers can be really difficult to be around, not because they are particularly unpleasant, (they really aren’t most of the time), but because they are terrifying. And I would submit that among the litany of potential reasons teenagers frighten us, two reasons bear most noting.

First, teenagers frighten us because we remember how lonely and isolated and unsure we felt as teenagers and being around them can feel like a painful rehearsal of what, for so many of us, were easily the worst years of our lives.

Second, teenagers frighten us because they not only see us but see right through us, not with the all-forgiving benevolence of childlike adoration, but with the unflinching appraisal of a too-just, as-yet-unseasoned judge. It’s not easy to win the trust and approval of a skeptical teenager, and having lost it, it can be very hard, sometimes impossible, to reclaim.

They are watching us. Almost sounds like the premise of a horror film, doesn’t it?

When I became an English major, I didn’t dream dreams of becoming a ninth grade teacher. I just wanted to study English and to write and had rather vague ideas about using those skill sets to make money somewhere, somehow. Like many fabulous and unexpected things, ninth grade teaching found me.

This is my fourth year teach ninth grade, and sadly for me, it means the very first class I taught is now graduating. It also means that I am catching myself crying at random times at assemblies and plays and concerts, watching them perform and thinking about what a stabilizing and inspiring delight they have been to me in these last four years.

When I began this job, my department chair told me that she knew transitioning from a university teaching schedule to a high school schedule would require some major adjustments, and it did, but she also told me that I would really get to know and love my students because I would be around them so much.

I took her advice cautiously and with significant reservations, but it has proved true beyond my most hopeful imaginings.

Still, I reach the Friday of every week completely spent. I spend entire days wishing I could hide in my office with the door closed and not be disturbed with questions or the constant pressure of unmet expectations—ungraded papers, concepts that remain difficult to comprehend after all my most earnest efforts to explain them, fears that I am at best a completely inept human being, and so forth.

Having said that, here’s what makes my exhausting job so much more than merely worth it. Let me focus on what teenagers teach me every day, every week, every month, and every year that I am around them. Teenagers teach me to show up and to be willing to be seen and to try.

Among the more positive clichés that circulate around teenagers is that teenagers keep you. When I say teenagers teach me to show up and to try, that’s what I mean.

Last week, in our school’s Advent chapel, one of my current students volunteered to read a passage from scripture in front of the entire school. I know from having had her in class that this is a student who struggles with stuttering. She could easily have refused to get up in front of people. No one would have forced her. But she didn’t.

She got up to read in front of almost 400 people, most of whom are older than her, most of whom struggle with being jaded and ironic and cynically detached from displaying any effort that looks like real effort. She read her verses and struggled to get through and stopped for breath when she had to. The auditorium was utterly silent while she read, but she finished the passage, and tears streamed down my face in the audience.

If I could have given her a standing ovation in the middle of the chapel service, I would have.

I am only her teacher. I can’t imagine how proud I’d be if I was her mother. As her teacher (and I can imagine her mother also felt this way), a big part of me wanted to shield her, wanted to step up on the stage and read in her place and give her a great big hug. But if I had done that, she would have been robbed of a moment of triumph.

I want to reject whatever unflinching veil it is that descends on us sometime around adolescence—the veil that we assume safeguards us against the repetitions of all our past mortifications.

I want to be willing to display effort that looks like effort, and not to hide.

I want to invite the earnest and eager pieces of me I disowned in my own adolescence to return to be forgiven and restored.

I want to laugh the way my students laugh—loud, head tilted all the way back, tears streaming down my face.

Image above is by David Schott, licensed by Creative Commons.