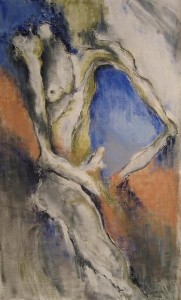 I am not a hero. After my last post, some readers wanted to know how I arrived at my attitude toward cancer, which is to be found somewhere between a religious person’s submis­sion and the cordial host’s welcome. A better question—one my oncologist and I wrestle with at every appointment—is why most cancer patients tumble into a bottom­less slough of despond.

My intention is not to criticize other cancer patients. To be told that you have a disease which is going to kill you in the next few months or years is to be slammed by a violent and remorseless truth that nothing in experience prepares you for. At first you can’t even process what your doctor is telling you, because there is nothing to which you can com­pare the news in order to make sense of it—it is a monster from beyond your imagination. Denial, self-pity, panic, despair: these are the natural reactions.

I was diagnosed with metastatic prostate cancer in the fall of 2007. Just before Sukkot my doctor phoned to warn that an “opacity” had shown up on my chest X-ray during a routine physical examination. To the Jews, Sukkot is zeman simhatenu, the “season of our rejoicing,” but there was little joy in our sukkah that year. Our season was one of dread.

Average survival time of men diagnosed with metastatic prostate cancer is one to three years. Maybe ten percent live ten years. When you are first diagnosed, you obsess over the numbers. You vow, “I will be one of the ten percent!” Your vow, though, has no effect whatever on the outcome of your disease.

No matter how often you swear that you will fight the cancer, you are helpless against it. The journalistic convention in obituaries to praise the dead for their “coura­geous battle” against cancer is a lie designed to comfort the living and healthy. At best the cancer patient consents to treatment, although he must withdraw consent at some point and permit the disease to run its course. Or, as L. E. Sissman sang of the foreign country known as Hodgkin’s lymphoma where he lingered for a decade,

I
Reside on the sufferance of authorities
Until my visas wither, and I die.

Cancer patients are betrayed by our culture’s dishonesty. Those who recover from the disease are hailed as “survivors”—a term appropriated from the Holo­caust—but while they are struggling with cancer and undergoing sometimes painful treatments for it, they are barely acknowledged. They are consigned to what Ralph Elli­son calls a “hole of invisibility.”

“There’s a possibility,” Ellison goes on to say, “that even an invisible man has a socially responsible role to play.” Not, however, as long as the servitude of cancer is described by the platitudes our culture favors—“fight,” “battle,” “survive,” or “suc­cumb.” Is it any wonder the cancer patient, who suspects the truth even if he dare not utter it to himself, ends in inconsolable resignation?

A friend of mine who has recovered from breast cancer points out that being a patient with a life-threatening illness is a release from daily, clock-managed, to-do-list responsi­bility. Cancer patients should embrace their freedom, she argues. That most fail to do so is a testament to their mortal terror of freedom.

My own view is somewhat different. Cancer permanently disfigures a person’s self-image, and neither the culture nor his curriculum vitae includes the materials for a recon­struction.

For half a century now, American culture has been a culture of self-fulfillment. Interests must be pursued, talents developed, desires expressed, needs met: the self is con­ceived as a string of imperatives. But cancer exposes these as arbitrary and extrava­gant. The staples of selfhood, it turns out, have been neglected.

A diagnosis of cancer might be the “rift or revelation” which, as the Romanian philosopher E. M. Cioran says, dries up illu­sion and begins the true self. And yet the exact opposite is what usually happens:

When you no longer believe in yourself, you stop producing or struggling…whereas it is the contrary which should have occurred, since it is precisely at this moment that, being free of all bonds, you are likely to grasp the truth, discern what is real and what is not.

If cancer patients are to be helped out of their despondency—if they are to face the reality of their condition, which to my mind is the only possible way to go on living with cancer—they must be helped to believe in themselves again.

But how? The literature, divided between breathless guides to “alternative” healing and triumphalist accounts of “survival,” is of small assistance. Perhaps my own history, though, might suggest a tentative first step.

My wife was pregnant with our fourth child during the initial months of my cancer. Watching her deal with morning sickness and a husband laid low by chemo­therapy, I realized that I had the easier job. All I had to do was die. She would be left alone with her grief and the emptiness where I once held her and we laughed together. As Dora Carring­ton cried to her dead husband Lytton Strachey in her diary, “Every day for the rest of my life you will be away.”

The self that lived for fulfillment may have collapsed like a pretense at the first word of cancer. This is not a loss, however, but a refinement. You are no longer defined by the interests you pursued or the desires you expressed: you are no more or less than the person whom your wife (or husband) and children love.

Your capacities may be diminished—you may not be able to dance with your wife, play catch with your sons, pick up your daughter—but they do not love your capacities; they love the person. And whether you accept the responsibility of being that person, or acquiesce as the cancer proves itself to be stronger than love, is a decision entirely within your command.

D. G. Myers is a critic and literary historian who taught for nearly a quarter of a century at Texas A&M and Ohio State universities. He is the author of The Elephants Teach and ex-fiction critic for Commentary. He has also written for the New York Times Book Review, the Weekly Standard, Philosophy and Literature, the Sewanee Review, First Things, Jewish Ideas Daily, the Daily Beast, the Barnes & Noble Review, the Journal of the History of Ideas, American Literary History, and other journals.

A critic and literary historian for nearly a quarter of a century at Texas A&M and Ohio State universities, D. G. Myers is the author of The Elephants Teach and ex-fiction critic for Commentary. He has also written for the Image Journal, Jewish Ideas Daily, the New York Times Book Review, the Weekly Standard, Philosophy and Literature, the Sewanee Review, First Things, the Daily Beast, the Barnes & Noble Review, the Journal of the History of Ideas, American Literary History, and other journals. He lives in Columbus, Ohio, with his wife, the pediatric cardiologist Naomi Kertesz, and their four children: Dov, Saul, Isaac, and Mimi.