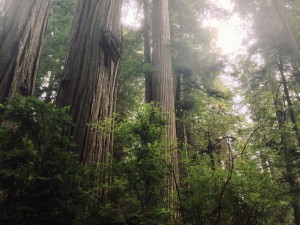 I awoke one morning from a recurrent nightmare of nuclear apocalypse to see towering redwoods dripping with fog outside the window. I stepped from the cabin into a chorus of frogs and crickets, interlaced roots spreading wide into bracken fern, neon banana slugs sliding across fragrant duff. I breathed crisp air and sensed that I was in the midst of an ecosystem in perfect harmony.

In that instant I was convinced this hadn’t happened randomly (as I understood evolution), or because the trees had “willed it” (as I understood the Beyond War manifesto I’d recently embraced).

It was the first time I felt God revealed—not a bearded cloud-bound giant calling for repentance, a la the Bible-thumping students on the campus quad I’d tried to avoid—but a presence, being—in and behind all that existed.

I was a twenty-four-year-old atheist, raised in a religious and spiritual vacuum and materialistic milieu, and I was attending a Beyond War training session in 1985 in order to save the world from nuclear annihilation.

Until that moment I had believed only in what I could see and touch, in science and empirical evidence. Taught about the Big Bang in second grade, I fell for the fiery intergalactic drawings. I memorized the Linnaean taxonomy of two hundred creatures in eighth grade biology, and dissected a cat in tenth grade anatomy.

I accepted empirical facts as gospel, but with those facts also came fears, particularly of sexual assault (in my job with the campus police department, I learned and then presented to others staggering statistics about rape).

But the nuclear threat had also paralyzed me: I dreamed Nagasakis and Hiroshimas, of hovering through mushroom clouds and radiation sickness.

Though I once soared in sleep, I’d felt a void in my life from the moment I could think about myself. Decades later I would read these words (attributed to both Augustine and Pascal) and feel relief knowing my emptiness wasn’t unique:

“There is a God-shaped vacuum in the heart of every man which cannot be filled by any created thing, but only by God, the Creator, made known through Jesus Christ.”

I tried to fill the hole with friends and sports, later with lovers and volunteer work. Because I didn’t believe in a power outside myself, by the time I was in college I believed saving the world was up to me—and knowing that, I knew we were doomed.

I hadn’t kept my parents from divorcing, or my own wedding engagements, to not one but two fiancés, before I married a third. How could I keep the US from launching ICBMs at the Soviets?

Then a friend told me about Beyond War and I became a disciple, attending interest evenings and follow-up sessions. After graduation, my husband and I moved, joining another local chapter. This group, in contrast to the professors and intellectuals in our college town, included mostly churchgoers, although they were careful to keep God out of the program.

The Rossos were Catholic, owned a furniture store, and we sat on couches sporting price tags as we discussed achieving evolution. One young mother argued the difficult reality of nonviolence: “I like to think I’m a peaceful person,” she said, “but if someone attacked my baby I wouldn’t hesitate to kill him.”

I thought of all the women I’d trained to hold car keys protruding from between their fingers when walking after dark. I taught them to gouge an attacker’s eyes with the keys, to rake his shin with their shoes, to elbow the solar plexus, knee the groin.

What sort of self-defense was I supposed to advocate as a Beyond War believer: that if you desire peace strongly enough, everyone else—rapists included—will abandon force?

In preparation for the weekend training, I read all their literature, including the bookThe Hundredth Monkey and learned to draw their timeline: one that showed the rate of evolution speeding up drastically once our ancestors crawled from the sea.

All we had to do was will ourselves to evolve into nonviolent beings. It was that simple. And quick. If enough of us said, “No more,” then war would disappear like our prehensile tails.

That morning in the mountains, the timeline loomed before me. It wasn’t that I thought the dates and numbers were inaccurate. They simply weren’t enough.

My evolution toward faith began then: a slow process of abandoning my unbelief and demand for certainty in questions great (how to prevent nuclear war) and small (when to start a family), and learning to trust in what I couldn’t prove.

I began to attend a Methodist church whose members were studying their Bishops’ letter “In Defense of Creation.” It was the first I’d heard of creation as inclusive of, not antithetical, to science and evolution—the first I’d heard of stewardship, of believers caring about anything more than personal salvation.

Expecting our first child, my husband and I moved again, and I studied the Bible with a pastor who called the creation stories in Genesis “beautiful and amazingly accurate pre-scientific explanations” for phenomena science later confirmed.

In the Bible and church I heard stories of hope in the midst of violence, of change that happened not by demanding it, but by accepting life as it painfully is, and my fears gradually ebbed. I had a part in saving the world, yes, but there was a far greater power always working for good.

“You have made us for yourself, O Lord, and our hearts are restless until they rest in you,” writes St. Augustine. Restless until our birth pangs lead us into the embrace of the infinite one.

Cathy Warner is the author of Burnt Offerings (poetry, eLectio 2014). She serves as “Good Letters” Literary Editor, and earned an MFA from Seattle Pacific University. Cathy and her husband renovate homes and she leads writing workshops in West Puget Sound. Her website is cathywarner.com.