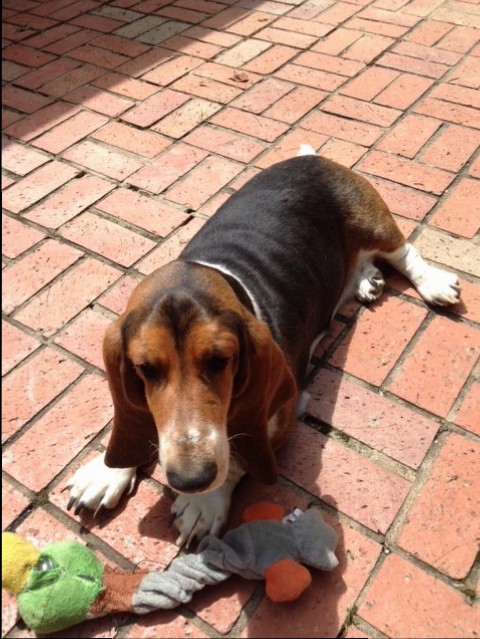 The other day, I watched a Basset Hound playing with a lizard; to be more accurate, she was harassing him mightily, and he was doing his best to get away. It was one of those summertime lizards, striped and sleek, who’d ventured from beneath the cool protection of the planters that line the terrace. He’d hoped to sun himself in peace, I suppose.

But the dog, Clementine, discovered his siesta, and she was having a marvelous time picking him up by the tail and shoving him around. She barked in pretend anger, her tail wagging as she jumped from side to side.

This went on for a time; then I kicked the lizard under a planter and spoiled the fun. He went back to whatever cold stasis he spends his time in, while she romped off to tear a plastic pot liner into shreds. Lizards, pot liners, paper bags—whatever’s handy, she’ll play with it.

Now, some killjoy would explain that this dog, well past her puppydom, is honing her hunting acumen in all this. And when she chases or gets chased, she’s honing her survival skills. There’s a scientific purpose to the business, and it’s meant to keep her gene pool moving down the line (spayed though she is). They’d also point out that the old and sick don’t have time for play.

In a sense, that’s all true. We do grow more adept by practicing for the fights and races ahead. And the pain of certain states—decrepitude and disease—does tend to squelch the play instinct altogether.

But why does Clementine play while the lizard doesn’t? And out in the pasture, why does the colt kick about and the calf cavort? Monkeys are famous for their shines. Dolphins are said to be a blast. So why are these species so good at a party, while the reptilians and arachnids and mollusks just slither, sup, and sit?

One telling characteristic of the higher animals (yep, I privileged mammals, and I’m not backing down) is in fact this very dimension of play. It’s a defining aspect of being a warm blood that you just like to mess around, whether alone or in a group. Play is fun, and the pleasure it gives has been the focus of both philosophic and scientific study.

In a wider context, Freud and Bentham had their take on pleasure, famously focusing upon the feelings that arise from stimuli, shaping our responses and adapting our behaviors. Pleasure and its opposite, pain, are experimental feelers, ones from which we extend our snail horns or retract them, depending upon the amount of agreeability that is met. But this only takes us down the path of Pavlov’s dogs, and that’s always been too simple.

Jean Piaget, the developmental psychologist who studied child development, thought play a phenomenon difficult to fathom precisely. He spent his life studying the act, but like most men of great intellect, had the humility and decency to admit that primordial things cannot be reduced completely to formula.

In Homo Ludens, the major work on play, social scientist Johan Huizinga said that play is “a free activity standing quite consciously outside ‘ordinary’ life…‘not serious,’ but at the same time absorbing the player intensely…It [has] no material interest, and no profit can be gained…It proceeds within its own proper boundaries of time and space according to fixed rules and in an orderly manner. It promotes the formation of social groupings that tend to surround themselves with secrecy and to stress the difference from the common world by disguise or other means.”

From that definition, it seems the mysteries of play—its special garb and unique roles, arcane rules and peculiar playing fields—transport us to a different plane. There, we become beings with special powers (only we can score when we have the ball; only weare “safe” when we touch the tree; only we can move while others stand “frozen,” awaiting our release). In this way, there is a kinship between play, pageantry, and ceremony—new rules apply creating new states of existence and honor.

That idea brings us closer to the aspect of play most related to being human. While engrossed, the player experiences delight, and better yet, knows that he or she is delighted. Although there is certainly pleasure in competition—i.e., the kind of “play” related to sport (which in this age is often a professional exercise, profitable and serious)—the delight I speak of is purposeless—the pure delight of throwing and catching—of spinning, balancing, capering, frolicking.

“When I run, I feel God’s pleasure,” said the Olympic sprinter, later missionary, Eric Liddell (immortalized in the film Chariots of Fire). Like David dancing before the Ark, play’s delight brings us within the Edenic ecstasy of being what we were made to be—of simply reveling in the two-handed, two-footed, hairy-headed things that we are, with tongues out, eyes flashing, and chests heaving as we go.

There is a Sundayness to play—that day meant to bask, to rest—in that play is a good in itself (honestum, as the ancients would have it), with no means to an end, no utilein sight. There are no talons to be sharpened, no muscles to be strengthened, no feet to be made fleeter. Oh, those things may be happening in the process, but the delight is why we do it in the first place.

We eat and drink for pleasure, though they also sustain us. Most do not come to the meal as though it were a training table, with the purpose to carbo-load for a marathon. Instead, we come for the savory, the sweet, the salty—that which warms and cools and seasons. We come for the delight.

And so it is with play. For while transfixed by its circle, we are at once beyond thought of the travail within which we are made to labor, and at once absorbed inside a being that we were made to enjoy.

A.G. Harmon teaches Shakespeare, Law and Literature, Jurisprudence, and Writing at The Catholic University of America in Washington, D.C. His novel, A House All Stilled,won the 2001 Peter Taylor Prize for the Novel.

Photo above credited to Sergey Urzhumskov and used under a Creative Commons license.