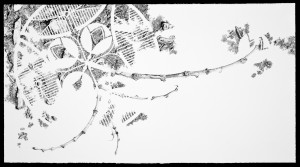 Image: Natalie, a lot of your recent artwork is temporary—that is, it’s drawn directly onto gallery walls and when the show is over, only photos are left. Can you speak to this?

Natalie Settles: Yes, these are works with lifespans. In fact, the installations are typically up for the same amount of time over which the lifecycle of a small annual plant would play out.

When viewers encounter one of these temporary works, they’re usually enamored with the scale and detail and take their time moving throughout the gallery, drinking it all in. Sometime toward the end of their visit with the work it hits them in the gut—this won’t last. The work will need to die. And so they stand and drink it in now with a kind of presence that comes from knowing this may be the last time they see and experience this space as it is—the last time they feel the presence of this work.

I know this kind of attention from the times I’ve spent with loved ones who have a terminal disease and whom I know I will never see again once we part ways. It is the feeling of visiting a remarkable place and knowing you will likely never return to it. These moments have a kind of vividness and apparentness that is unmatched. It’s the sort of attention I hope I grow to give to more moments of my life.

Often the works are painted over in my absence, and even when I’ve been present, curators have frequently insisted that I not paint over the work myself—they feel I should not destroy what I have made. If they feel this way, I honor it and let them paint it over. I provide them with the ritual process they must observe. The first step is this: “Stop, look. Yours are the last eyes to see this work.”

I find these works teach me a lot about the beauty and power of things that you cannot keep—which is everything.

Image: You incorporate stylized decorative elements alongside specimen-like biological drawings. What drew you to put these together?

NS: The stylized elements are quotes from Victorian-era decorative arts designers. I began making this work while living in Cambridge, England, where I discovered the connection between Victorian design and early evolutionary biology.

The designers and biologists of that era had been in dialogue with and they both had a keen interest in modular forms that were variations on a theme. They borrowed and lent ideas in both directions. My borrowing imagery from this era became a touchstone back to a time when art and evolutionary biology were integrally intertwined.

The distinct appeal of grafting the stylized patterns onto drawings of actual plant matter was linking up idealized forms with pieces of a plant that had lived in the contingencies of a particular time and place. The plant matter had the battle scars, growth history, and contorted form to prove it.

This of course speaks to the ideal of a genome playing amid the demands of other living and nonliving members of an individual’s environment. And this gets to a grander underlying sense of a whole playing out through the snarl of bumped and bruised moments.

Image: You use a limited palette – —lots of black and white with occasional reds and oranges. Why is that?

NS: I find black and white to be an incredibly rich palette—there are bright whites, warm whites, cool whites, putty whites. I prefer the ringing clarity of photo white (the purest white possible) against which I can cast other whites.

Likewise, blacks provide a rich range from the deepest bone black to brown black, blue black, and the opalescent gray of solid graphite, along with the full range of grays down to tones so subtle they’re hard to detect.

My work leans heavily on form and often features the substrate and negative space as much and more than anything that’s drawn. I find that the contrast of black and white is the most compelling way to create this kind of interplay. Added to this, I often play between matte and gloss media—shifting textures rather than colors. Though all the work is two dimensional, for me it comes from a very sculptural mindset; contrast, tone, and finish are the backbone of this approach.

Red is primal, vivid, and powerful. It embodies both strength and weakness, as it is lifeblood and also the trail left by a wound. I love how its visceral earthiness interacts with the plant-based drawings to cast the discussion to a broader range of life beyond the literal life of plants. Red transmutes sticks and bark into bones and flesh.

Orange I have less excuse for, except that it is another color when I need one. Its prime virtue is that it has perhaps the fewest cultural associations and so a kind of unfettered freshness and can hold its own with red.

Overall, one of my greatest pleasures is drawing with minerals—graphite and watercolor—on plant matter—paper. In this way, I am making images of dirt and plants with dirt and plants.

Natalie Settles has exhibited nationally and internationally since 1999. Her work intermingles the histories, inquiries, and forms of art and science and has lead to collaborative projects with researchers in biochemistry, botany, physiology, and developmental and evolutionary biologies. Settles was a 2008 Wisconsin Arts Board Fellow. Her wall drawing environment entitled “Ornament and Architecture” was featured in the 2011 Pittsburgh Biennial. In 2012 she served as Assistant Curator and essayist for The Andy Warhol Museum's Factory Direct exhibition of artist-industry collaborations, and from 2011 to 2014, she was Artist in Residence with the Tonsor Laboratory for Plant Evolutionary Genetics at the University of Pittsburgh. Settles continues her collaborative work with evolutionary biologist Stephen Tonsor and other biologists and technologists on a digitally evolving cast-light "wallpaper" that is both a work of art and a system of scientific experimentation. She is based in Pittsburgh, Pennsylvania, and you can visit her website here.