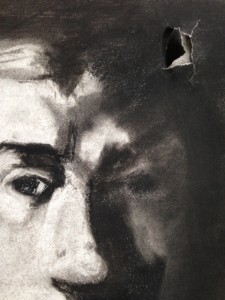 Last Wednesday I settled down on the couch to do something I’d been meaning to do for months: Watch True Detective. My kids were asleep. My wife was asleep. I was all set to binge watch until my eyes bled.

Season one, episode one cued up on my laptop. Play. Woody Harrelson in a suit. A naked dead woman tied up in a field, deer antlers stuck to her skull. Stringy-haired Matthew McConaughey lighting a cig in the interrogation room.

How can I say what happened next without sounding fake? Our house was shot. Hit by bullets. The noise of gunfire was suddenly present, live, loud, in my living room. Instinctively I rolled off the couch onto the floor and nearly crushed my computer. My wife appeared from the hall.

I hissed at her to get down. More shots, this time from farther down the street. I grabbed my phone off the end table, called 911, and barely remembered my own address to give the dispatcher.

There is nothing in the entire world like the sound of live gunfire. In the movies it comes with a lot of accompaniment. A musical crescendo, squibs, and stuntmen, catharsis. In reality, it’s an all-consuming WHACK—several of them, in this case—flat, dead sounds that grabbed control of my central nervous system.

I was in my body, but in those few seconds the gun had possession of my mind. I understand that some people believe gunfire is an audible cocktail of Extenze and hyper-concentrated Viagra. In fact, the opposite is true. There is nothing in the entire world more emasculating.

The police couldn’t do much. By the time they arrived, the shooter was long gone. My neighbor caught a glimpse of him—a young man—but not enough to give the police a description. They collected the spent shell casings from the street—bullets from a .40 caliber Smith & Wesson pistol—and inspected our house and yard. They were sympathetic and appropriately disgusted. They said they’d send extra patrol cars up and down the street for the rest of the week.

The house had been hit at least five times. Three bullets had punctured the siding and external wall, then blasted into the house and buried themselves in an internal wall near where I’d been reclining. Another had gone through the siding, through a downspout and thunked into our neighbor’s house. Two bullets, before hitting the house, had destroyed my daughter’s lawn chair. One bullet had torn completely through my portfolio and put a hole in my charcoal drawings from college.

My wife found a final bullet hole below our bedroom window, near where she’d been sleeping. But nobody was hurt. My wife, my children, and I were shaken, but we were safe.

And it was just our house. Nobody else on the block was hit. We have no enemies that I’m aware of (though, evidently, we may have enemies I’m unaware of.) Maybe it was a gang initiation. Whoever had squeezed the trigger is now the newest and proudest Blood.

Maybe it was a kid pissed at the world and ripped on meth. Our house reminded him of the house where he grew up, the one where his father sodomized him with a broomstick every night. Or maybe, to the person holding that gun, our house just looked like a house that needed some extra holes.

I ask God to protect my family, but those prayers, I realize now, are mostly a kind of talisman, like a good luck charm. Maybe I’d get the same protection by crossing my fingers and whispering into the wind. I do it because if I didn’t and grievous harm did come to my family, I’d be culpable. In fact, I’d have to blame myself. I’m praying up an insurance policy, in other words, against the worst guilt I could possibly imagine.

To say, “God protect my family,” and mean it, to fully comprehend the ramifications of that request, is to know its true meaning is, “God imbue my family with immortality. Make us bulletproof.” But nobody lives forever. Ultimately God’s answer to my request for the protection of my family must, at some inevitable point, be “No.”

I suppose I’ll never really know if God shielded us from those bullets, or if we just got really lucky, in just the same way I’ll never know who put the bullets through my house or why. It’s a black hole of mystery and meaninglessness.

“Meaninglessness” if that’s all last Wednesday ever signified. If God is at work through the bullets in my house, the language of his special protection is probably not apropos for what’s been left in their wake.

Now I have a very personal choice in front of me: Whether or not to help bring God’s peace-on-earth. And what a yoke. What a millstone around my neck. Let’s not forget my family and I were that kid’s victims. Live by the sword, die by the sword, my misguided young friend. It’ll be your brains splattered on an alley wall someday. It’ll be somebody else’s bullet straight through your eyeball, somebody else just like you. Me? I’ll be long gone and free.

I’m not one for signs and wonders. I don’t see visions and I’ve never heard the voice of God. But a couple of days later, as I was brooding on what happened, a thought popped into my head, one that I’m sure is not mine. More like a scene:

I’m stepping out of my house. The shooter is there in the street. I walk up to him. His eyes are wide. I embrace him. I put my hands on his forehead. I kiss his cheek. I’m blessing him again and again and again.